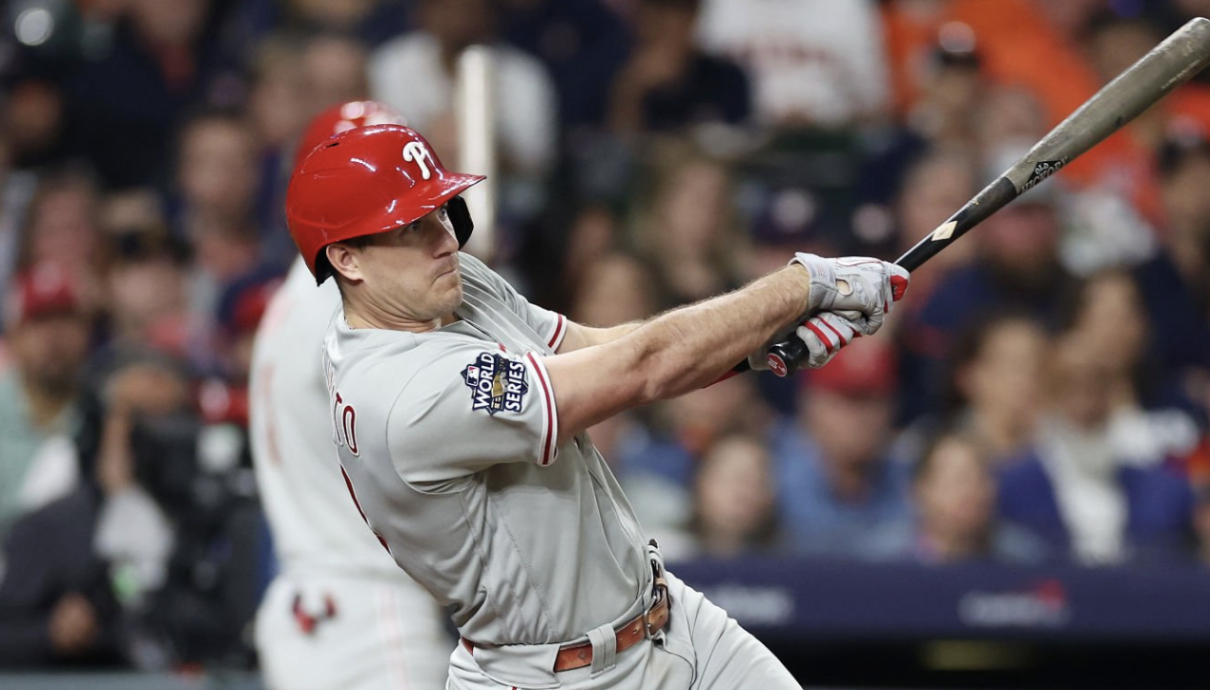 The Philadelphia Phillies have shown throughout the MLB Playoffs that they are a tough out every game, regardless of the opponent. Friday’s Game 1 of the World Series became the latest scene of the Phillies never-say-die attitude as Rob Thomson’s squad rallied from a 5-0 deficit against the Houston Astros to win 6-5 at Minute Maid Park.

J.T. Realmuto’s go-ahead homerun in the top of the 10th inning capped off a heroic comeback from the Phillies, while Nick Castellanos’ diving catch also helped preserve the victory.

The Astros raced out to an early advantage through some impressive hitting from left-handed slugger Kyle Tucker and clutch hitting from catcher Martin Maldonado. Tucker’s solo shot in the bottom of the second paired with Maldonado’s RBI single helped Dusty Baker’s side claim a 2-0 advantage against Phillies starter Aaron Nola.

Tucker added to his record-setting performance by extending Houston’s lead to 5-0 in the bottom of the third, delivering a three-run homerun to right-center field. He became the first Astros player to deliver multiple homers in a single World Series game.

The Phillies did not give up though, a continuation of what they’ve shown throughout the postseason. Nick Castellanos’ RBI single in the top of the fourth inning helped started a surge for the Phillies offense before Alec Bohm’s two-run double cut the Phils’ deficit to 5-3 against veteran starter Justin Verlander.

Realmuto’s first contribution tied the game for the Phillies in the top of the fifth inning, bringing home Brandon Marsh and Kyle Schwarber with a double down the left-field line.

J.T. stands for JUST TIED THIS BALLGAME RIGHT UP pic.twitter.com/u33yqoIuaA

Both bullpens rose to the challenge as the game went on, pitching shutouts and coming up with important outs when their teams needed them. Seranthony Dominguez escaped a major jam in the bottom of the ninth inning after Jose Altuve’s single and stolen base gave the Astros a potential winning run in scoring position.

NICK DOES IT AGAIN pic.twitter.com/epLEEDkzoR

Realmuto called his own number in the top of the 10th, lining a go-ahead homerun into right field off Astros reliever Luis Garcia. It was Realmuto’s third RBI of the night and a crucial one as the Phillies grabbed their first and only lead of the night.

David Robertson helped close out the Game 1 win, getting pinch hitter Aledmys Diaz to ground out with runners on second and third base. Not only did Realmuto deliver in his first World Series appearance, but the Phillies bullpen was immaculate, striking out seven Astros and not conceding a single run in 5 1/3 innings pitched.

13 wins is down to 4.#RedOctober pic.twitter.com/C9w4qdyCV2

The Phillies are back in action on Saturday night for Game 2.