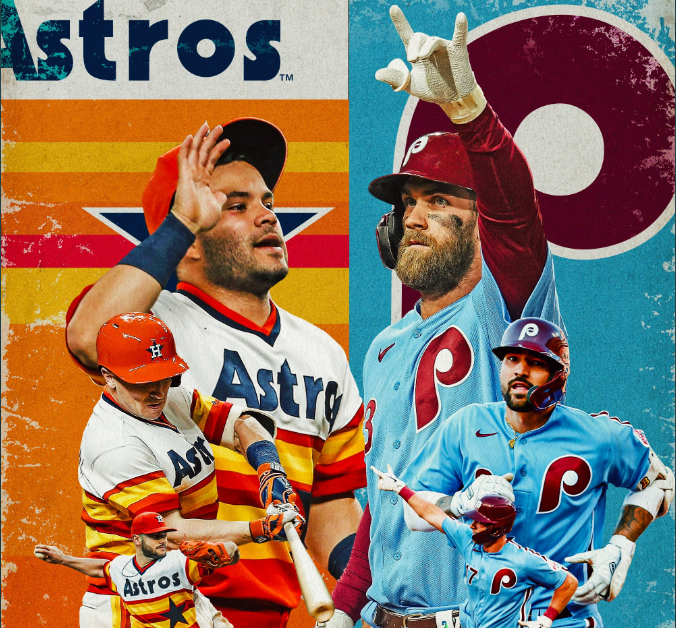 We’re back with an all new Brew. The Phillies got their split in Houston. The World Series now comes back to Philly for the next 3 games. The Eagles remained undefeated after taking out the Steelers on Sunday. Elon Musk is a scum bag. We have a lot to get to, so lets do this. It’s Brew time!

THE PHILLIES RALLY BACK FROM A 5-0 DEFICIT TO WIN GAME 1 🔔 💪 pic.twitter.com/bZIraeAVjF

Realmuto had the game winning dinger

JT Realmuto with the go-ahead solo HR in the 10th! 💣

He gives the @Phillies their first lead in Game 1. #WorldSeries pic.twitter.com/yL9iNs6JwP

This kid is a legend

Probably telling him, “I told you.” #WorldSeries pic.twitter.com/lgsTQw9NQB

Astros get the W in game 2

It seems like Framber Valdez is going to his right hand for a substance? #WorldSeries pic.twitter.com/ufIAM50D6Z

7. AND. 0. #FlyEaglesFly @Eagles have now tied their best ever start to a season in franchise history (2004). pic.twitter.com/Aw21YzsBfR

A passing, receiving, and now a rushing TD for @CMC_22!

Penn St. falls to the Buckeyes

Man on a mission

This man had a missionpic.twitter.com/zUPtCAqoT1

Everyone has a price

Nets star Kyrie Irving had a heated exchange with a reporter following Saturday’s game, and didn’t change his stance on his controversial tweet. https://t.co/9LaA9FnrT4

Fetterman had a stroke and he’ll recover from it. What’s Trump’s excuse? Via @TheDailyShow pic.twitter.com/xNfSIylbBo

Another Republican liar and cry baby…

Doug Mastriano says the PA Secretary of State is trying to steal his election for governor: “They can expect a lawsuit .. there’s just too many shenanigans.” pic.twitter.com/VsWcB8IZuk

The result of Republican rhetoric

Elon Musk is a piece of sh#t

Elon Musk, a billionaire with 112M followers who now owns this website, is peddling an unproven conspiracy that asserts Paul Pelosi was attacked because of a dispute with a lover who is a San Francisco Castro nudist. pic.twitter.com/LODJHY59Aw

Here’s the kind of “info” we can look forward to getting on twitter from here on out. pic.twitter.com/VbFcDXV65V

Jimmy Kimmel called Elon Musk a “fully-formed piece of shit” after the Chief Twit pushed a conspiracy theory about the assault on Paul Pelosi https://t.co/CaaA9qbV81

Denver can do better than Lauren Boebert

Opinion: Please, don’t give your vote to Lauren Boebert https://t.co/na8IwBhged

This is the society we live in now

An unidentified person projected an anti-Semitic message onto the scoreboard at TIAA Bank stadium in Jacksonville during Florida/Georgia weekend. This happened a day after Nazis stood with anti-Jewish banners on an I-10 overpass in Jacksonville.pic.twitter.com/1vxUSmbdG7

I love you, Paige!

Emily Salch makes the Brew two weeks in a row

MTV Cribs is back

The hit 2000s show “MTV Cribs” is making a huge comeback … and we’ve got a first look inside some celebs’ homes to be featured on the season’s premiere. https://t.co/6WYncxzsIm

New Rihanna single is out now

Lil Wayne says Jay-Z is the greatest rapper of all time pic.twitter.com/Y4tXXeK3kL

One of the best storylines going in Wrestling…

Uncle Howdy is back

“You will never be able to hide from me… Your Uncle Howdy@Windham6 | #SmackDown pic.twitter.com/GKpppTOpfF

Not a bad idea

After the reports of #HIAC PLE being discontinued, there have been TALKS of scrapping off #MITB event too and shifting the Men’s and Women’s MITB matches to #WrestleMania. pic.twitter.com/30HWY8OsQZ