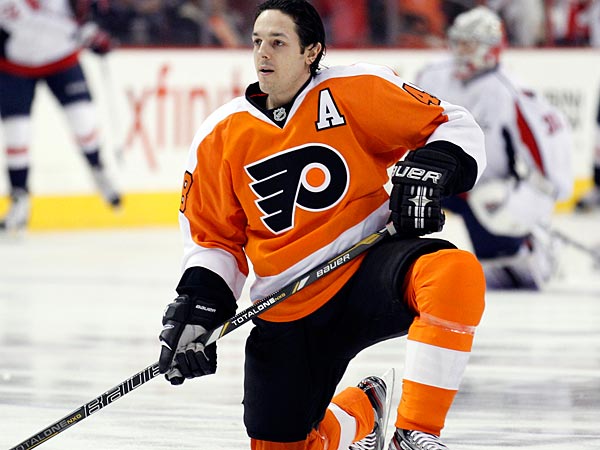 At 37 years of age, Daniel Briere is deciding to call it quits on an NHL playing career. From the press release on the Flyers’ website:

Former Philadelphia Flyers center Danny Briere, whose six seasons with the club included some of the most prolific playoff performances in franchise history, announced his retirement as a player on Monday after a 17-year professional career that included 973 NHL games.

“After taking a few weeks to think about it, it’s time to hang them up and spend a little more time at home with the family,” Briere said.  “I’ve been very, very fortunate to have a chance to play with some great organizations, but at this point the family becomes a priority.  The Flyers are where I played the bulk of my career. I’ve had a great time in Philadelphia and have been very, very fortunate to have the chance to play here. I would like to thank Mr. Snider, Paul Holmgren and Peter Luukko along with the coaches, staff, the fans and all my teammates. It’s been a great ride in an area that I still call home.”

Briere, 37 (10/6/1977), recorded 307 goals and 389 assists for 696 points with the Phoenix Coyotes, Buffalo Sabres, Flyers, Montreal Canadiens and Colorado Avalanche. The native of Gatineau, Quebec was originally a first-round selection (24th overall) of the Phoenix Coyotes in the 1996 NHL Entry Draft, which came following an exceptional 1995-96 junior season for Drummondville of the Quebec Major Junior Hockey League. Briere led the QMJHL that year with 67 goals and 96 assists for 163 points, and over three seasons he scored 170 goals and added 246 assists for 416 points in 198 games for Drummondville. He won a gold medal with Team Canada at the 1997 World Junior Championships, and Drummondville retired his #14 in 2007.

After he left Philadelphia, Briere didn’t enjoy a great amount of success. His decision is based on spending more time with his three children [and being unable to play in today’s NHL], who are still living in Philadelphia.

Briere will address the media in a press conference tomorrow in Philly.