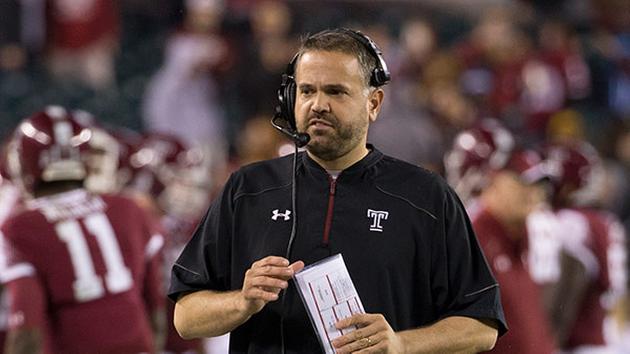 According to a report, Temple football’s head coach Matt Rhule is leaving the program to take the head coach job at Baylor university.

The report was confirmed by an official announcement by Baylor football.

OFFICIAL: We have our new Head Football Coach. Welcome to Matt Rhule and his family. #SicEm ?

Rhule just wrapped up a regular season where the Owls won their first ever AAC title and are heading to the Military Bowl later this month. He was at the helm for Temple for the last four years where he compiled a 14-2 conference record in the last two, successful seasons. These last two seasons of prominence are unprecedented at Temple as it is the first time ever the program recorded back-to-back 10-win seasons and bowl appearances.

Here’s what Rhule said in the official Baylor release on the hiring.

“I am truly honored and humbled to join the Baylor Family and I can’t thank President Garland and Mack Rhoades enough for this incredible opportunity. Baylor is a tremendous institution with a history of football success and I know the passion that so many have for the Bears will help bring the community together to reach even greater heights. I am excited to get started.”

Rhule was seen as a likeable guy by all parties involved and has been rumored to be in the mix for multiple big-time jobs last season and this year as well. He certainly changed Temple football forever and the stats, like the one below, will show that he will go down as one of the best coaches in Temple history, if not the best.