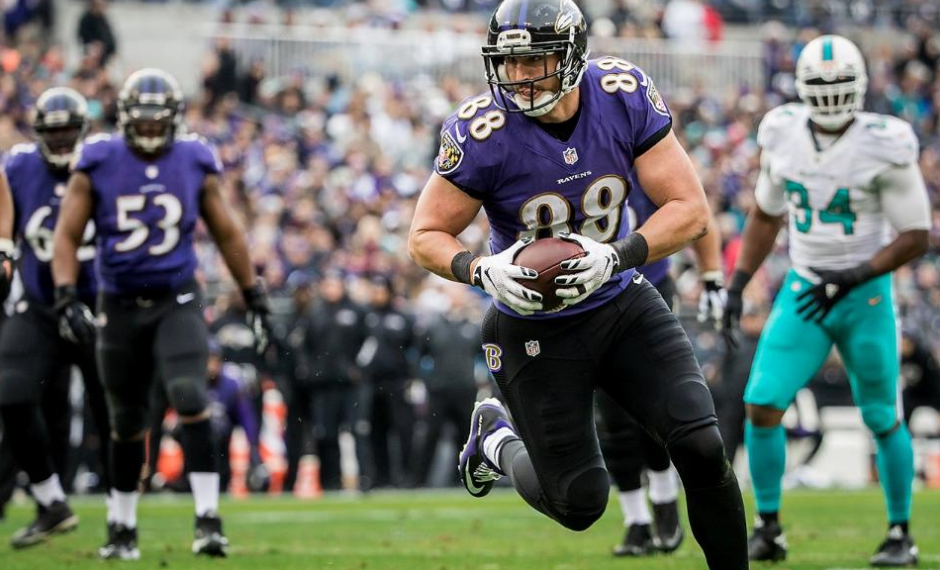 Another week in the wacky world of Fantasy Football has closed down and, for some, the season is over. Let’s face it – for those unlucky souls the season was over weeks ago. They probably were the teams that drafted DeAndre Hopkins, Allen Robinson, Rob Gronkowski, and Cam Newton. All this while the guy who drafted Mike Wallace, DeMarco Murray, and picked up Spencer Ware are riding into the playoffs on cloud nine. Next year will be interesting to see how these guys are affected during the draft.

We talked about weather last week, but now we need to focus on standings. This is the perfect time for teams to start resting players or limit their snaps when they have their direction locked up. While you don’t want to pose a huge risk to your team you also do not want to make a hasty move that could crush your postseason run. I still say go with who got you the finish line.

Let’s take a look at the recap for Week 13 below to see how the tight end is looking to make a name for the position once again as the same disappointments keep us scratching our heads.

Dennis Pitta: The Ravens as a whole are rolling right now and their offense is kicking it into high gear. With the explosiveness and re-creation of Mike Wallace, the passing game has been excellent. It has really started to open up the field for guys like Pitta, who has 23 targets over the last three games. At a time where pickings are slim, he could be a nice sleeper down the stretch.

Brandon LaFell: LaFell may be as inconsistent as the stock market, but with AJ Green out, he slides into the top receiver spot. He has accumulated 25 targets in the last three games and is on a bad team that will throw from behind a lot. His targets may not register for many touchdowns, but in a PPR league he could be a nice find.

Kelvin Benjamin: Even as his critics, including myself, were feeding off his reportedly Archie Bunker stamina during training camp, Benjamin started the year off strong. However, his team is still dealing with a lot of issues and now the coach has said maybe he pushed him too much too fast. Either way, it would be wise to stay away from Mr. Benjamin during the playoffs.

Lamar Miller: In a year where Miller was being drafted as a top three RB, he has severely underplayed all the way down to 23rd on the list. He has dealt with a lot of nagging injuries this year along with a quarterback who has made the Houston Texans the place where fantasy players go to die. His value will only increase if Brock Osweiler gets an appointment with the doctor from Rookie of the Year.

The Ravens have tons of fantasy power: The Ravens are rolling and their offense is becoming explosive. They have a nice combo in the backfield with Terrance West and Kenneth Dixon to control the line of scrimmage while opening up the passing game. Joe Flacco will never be a top quarterback option for fantasy purposes, but his counterparts will always reap the rewards. Pitta, Smith, Wallace and West should all be looked at as viable performers for the fantasy playoffs.

Golden Tate continues to take games off: This is a guy who broke out in 2014, but has yet to build on that campaign. His inconsistent games are worrisome and make the decision to start him a daily struggle. For example, 5, 12, 27 were his totals for the last three weeks. It’s hard to start a guy who is just a leaf on a tree full of branches.

Tight ends make a huge statement: If you paid attention this week, the TE position took over the fantasy scoreboard without top guys like Gronkowski and Jordan Reed. Tight ends in a standard league are an obvious requirement, but they still deserve consideration in PPR leagues based on their targets. If this last week was a preview, guys like Pitta and Travis Kelce could have some sneaky value down the stretch.

C.J. Spiller gets cut more than an inmate on an episode of Prison Break … The Giants are now blaming a stale offense on Victor Cruz. I’m thinking scapegoat … Ryan Fitzpatrick has been benched for good and still wonders why teams avoided his price tag like the plague in the offseason … Jeremy Maclin still can’t get on the field … Allen Robinson seems to have taken a trip to the Bermuda Triangle with no return date … Colin Kaepernick’s rise to prominence was short-lived as he was jettisoned back home to the pine … Thanks to Dwayne Allen some lucky person’s playoff dreams were ruined … Carson Palmer loosened up his chin strap and actually produced … Kelvin Benjamin continued to be average and as Cam Newton was too busy picking out his next necktie to concentrate … Bring on Week 14!