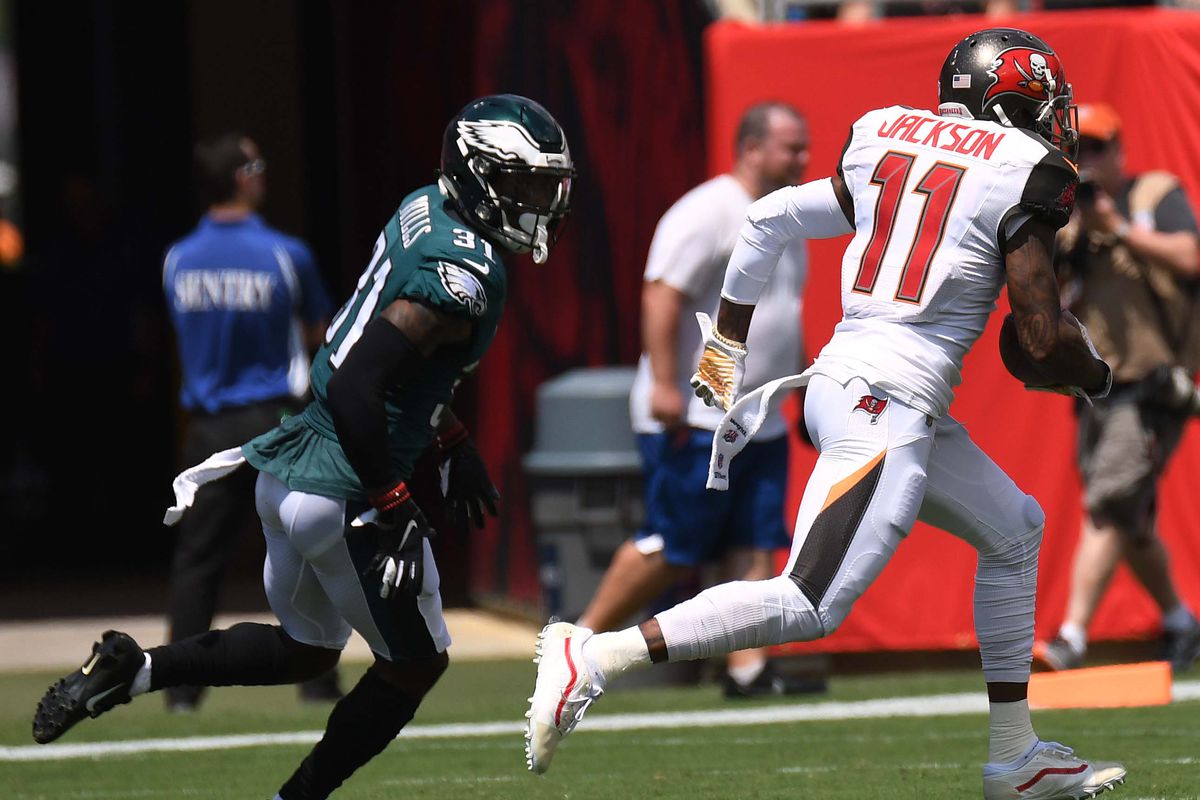 Carson Wentz’s return looms, but he alone won’t be the answer offensively for the Philadelphia Eagles.

There’s work to be done.

There’s work to be done defensively, too.

Ryan Fitzpatrick tossed four more touchdown passes, former Eagle turned Eagles-killer, DeSean Jackson, hauled in a 75-yard score on the first play of the game and the Tampa Bay Buccaneers held off Philadelphia 27-21 despite a furious second-half rally by the Birds.

Fitzpatrick had just six incompletions, completing 27 of his 33 tosses for 402 yards. He became the first quarterback in NFL history Sunday to record consecutive games with at least 400 yards passing and four touchdowns.

The trio of Ronald Darby, Jalen Mills and Malcolm Jenkins were getting torched in the secondary the entire game. Inconsistent pressure from the usually vaunted defensive line didn’t help things either. Jackson finished with 129 yards on four receptions, Mike Evans totaled 10 catches for 83 yards and a score and Chris Godwin added five snags for 56 yards and a touchdown for Tampa Bay (2-0).

This shit personal ima apologize for my language now !! But they Can’t fUc wit me n0ne !! TopFlight BLESSED #0ne0fone Tied the Jerry Rice Record on this play

Two plays in particular doomed the Eagles. First the Jackson touchdown, a play where Malcolm Jenkins sucked up too far, leaving Jackson all alone on Mills.

Fitzpatrick to Desean Jackson for the 75-yard touchdown! pic.twitter.com/ljMpuNTc7U

Darby whiffed on a tackle, leading to O.J. Howard’s 75-yard score, which came right after the Eagles used a 13-play, 78-yard drive that took over six minutes off the clock and tied the game at 7-7 past the midway point of the second.

After Howard’s touchdown, the Eagles went three-and-out and the Bucs stormed right down the field again, with Fitzpatrick hitting Godwin for an 8-yard score to push the margin to 20-7 with 42 ticks left on the first half clock.

The Birds were able to move the ball quickly down the field on their ensuing drive, with a 34-yard Zach Ertz catch helping lead to a 42-yard field goal attempt. Jake Elliott, however, banged it off the right upright.

Eagles did a great job of moving briskly down the field to jet Jake Elliott in position for a 42-yd FG, but he bangs it off the right upright. pic.twitter.com/s0Xdr4T0JW

Then there was the march to start the second half, which stalled after Zach Ertz’s knee was down before he had a chance to reach the ball past the first-down marker on a 4th-and-4. I agreed with going for it, but you have to run something past the sticks, especially if you’re working on Lavonte David.

I agreed with going for it, but Ertz comes up shy of the first down working on David pic.twitter.com/wOPIZnwj4X

It took until the latter stages of the third quarter for the offense to establish a rhythm. The Eagles suffered a trio of key injuries early on in the game, with Jason Peters exiting with a hamstring injury, Mike Wallace departing with an ankle injury and Jay Ajayi missing most of the first half with a back injury.

When Halapoulivaati Vaitai initially came in, Jason Pierre-Paul was having his way and the Eagles became very conservative through the air. Not only did they lose a player who could stretch the defense, they also lost a left tackle that would’ve given Nick Foles some extra time in the pocket to take some more shots down the field.

There was also a massing penalty problem in the first half, with the Eagles facing a 3rd-and-41 at one point. They committed five penalties for 50 yards over the first 30 minutes, but just one for five over the final 30.

Eagles' secondary is getting torched, pressure from DL not as consistent as it was earlier in game, TB using a lot of quick drops too. It's 27-7 TB pic.twitter.com/N40Glro8UF

Agholor’s 50-yard catch and run highlighted the Eagles’ TD trek during the latter stages of the third, with Jay Ajayi’s 2-yard TD plunge making it a 27-14 game.

Can the Eagles rally? They get a touchdown before the end of the 3rd to trim the gap to 27-14, but secondary needs to step up, pressure needs to get ratcheted up. pic.twitter.com/plOzcrjSV2

The Eagles got the ball right back when Jenkins ripped the ball out of Evans’ hands after he picked up a first down. Philadelphia, though, was unable to capitalize when its ensuing series stalled when Foles’ prayer down the left sideline to Clement fell incomplete.

Can the Eagles rally? They get a touchdown before the end of the 3rd to trim the gap to 27-14, but secondary needs to step up, pressure needs to get ratcheted up. pic.twitter.com/plOzcrjSV2

A three-and-out got the Eagles’ offense right back on the field and their 8-play, 78-yard TD drive clawed them back within 27-21 with 2:51 to play. Foles lofted a beautifully placed pass in the back right corner of the end zone over a pair of Tampa Bay defenders to Agholor for a 2-yard score on 4th-and-goal.

Foles with a dime, drops it beautifully into the lap of Agholor for a TD over a pair of TB defenders on 4th-and-goal, Eagles whittle deficit to 27-21. pic.twitter.com/i0WPpEuNoy

Tampa Bay was able to move the chains twice on their next touch, with Jackson’s out-route picking up 17 on a 2nd-and-13 and Mills’ holding penalty giving the Bucs another first on a 3rd-and-3. Philadelphia was forced to use all three of its timeouts and didn’t regain possession until there was 19 ticks remaining.

By then it was too late.

Foles finished 35-of-48 for 334 yards and a touchdown. Ertz led the Eagles with 11 catches for 94 yards, while Agholor snagged eight passes for 88 yards.

There were two headscratchers to me in this one. I was shocked to see Wendell Smallwood get as many carries as he did. I get that Ajayi got hurt, but he should not be out-toting Corey Clement. Smallwood carried the ball seven times for 28 yards, but had opportunities for bigger gains had he chose the proper holes. Clement gained 30 yards on six rushes.

The other one was Dallas Goedert’s lack of snaps. Why was Josh Perkins getting so many? He dropped two passes as well. I didn’t get it.

If the Adam Schefter report is true, Wentz will make his 2018 debut next Sunday in Philly against Indianapolis.

Eagles’ QB Carson Wentz still needs final medical clearance, but he is on track to return next Sunday against the Indianapolis Colts, per league sources. https://t.co/MW3OGXuo97

That’s going to be electric! All that needs to be done now is that medical clearance.