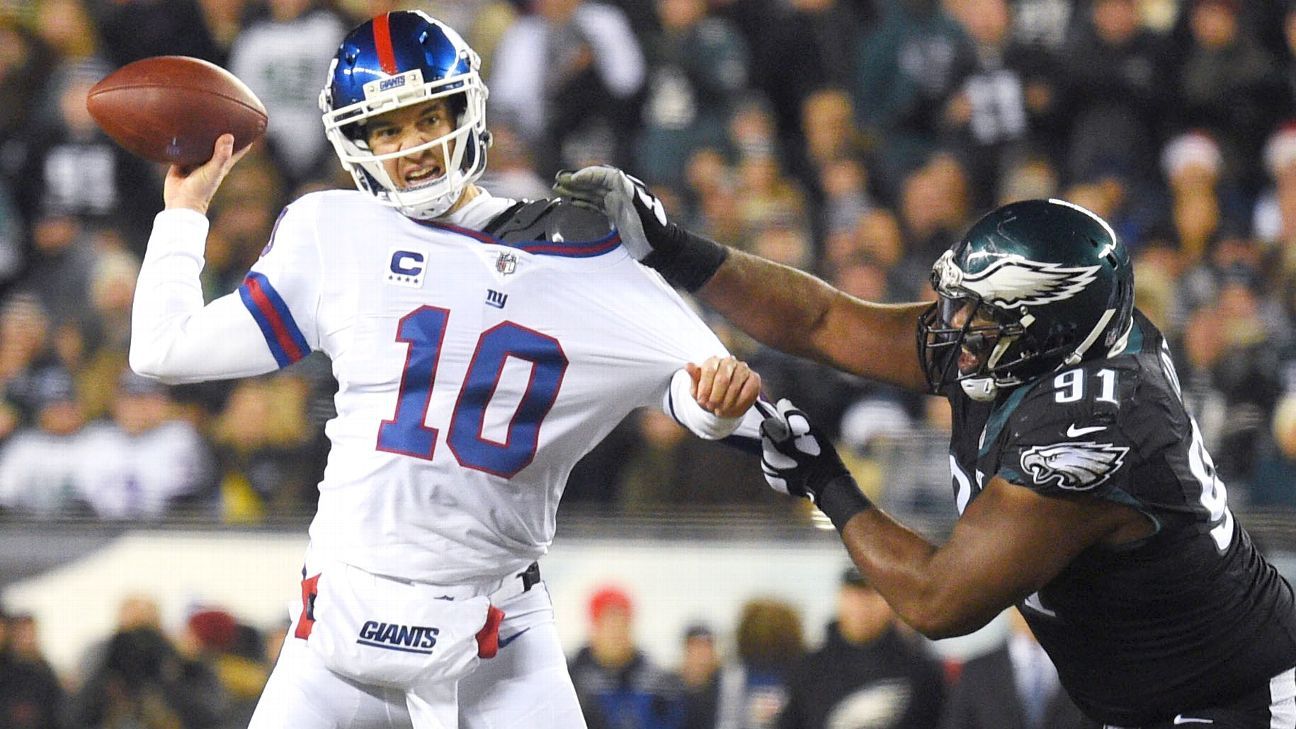 Five days isn’t a long time for the Philadelphia Eagles to heal their wounds.

Can they get off the schneid Thursday when they visit the Meadowlands to clash with the New York Giants?

Carson Wentz has been far from the problem. He’s getting relentlessly harassed on every snap. If you can overlook that and focus on the ball placement and decision-making, I actually think he’s gotten better.

Carson Wentz is the first QB in Eagles history with consecutive games of 300 yards, 65 percent accuracy, 2 or more TDs and 0 INTs.

The abysmal offensive line play is surprisingly still continuing. They’ve surrendered 15 sacks in their last four games after giving up 15 in their last 12 games in 2017. Lane Johnson is getting beaten across his face consistently, including Sunday when Stephen Weatherly recorded this strip-sack, which led to Linval Joseph’s 63-yard fumble return for a touchdown. That’s now back-to-back weeks he’s allowed a strip-sack, with another one surrendered to rookie Harold Landry in Week 4.

Arya Stark, what have you done with Lane Johnson? pic.twitter.com/zdyP4d95S2

Johnson said Sunday after the game that he believes the pressure needs to be picked up better.

“We got to pick up pressure better. We are letting guys loose, Carson’s running all over the field. It all starts with the offense playing good, we are going to win games. When we’re not, you’re going to see results like tonight. It all starts with me. There are no excuses. … “I wish I had an answer. As far as offensive line, and me personally, I have to pick my game up. I’ll bite the bullet on this one.”

Veteran left tackle Jason Peters noted after the game Sunday that Wentz’s injury has been a factor in the offensive line’s struggles.

The sacks aren’t coming because Wentz is holding onto the ball too long. He’s getting rid of it in 2.76 seconds and the sacks are occurring on an average of 3.93 seconds after the ball is snapped. The league average is 4.28 seconds.

The injury woes continued for the Eagles this week when it was announced Monday that Jay Ajayi was lost for the season with a torn ACL. He suffered it while attempting to pick up a blitz.

So how are the Eagles going to run the ball now?

The offensive line might be struggling in pass protection, but they’ve remained dominant as a run blocking unit. The team is averaging 4.4 yards per carry and nobody on the roster is averaging below four yards per carry except for Darren Sproles. Wendell Smallwood is averaging 6.0 YPC while Corey Clement and Josh Adams are picking up 4.1 yards per tote.

The issue has been Doug Pederson’s reluctance to run the ball.

The Eagles have run the ball just 36 percent of the time this season, which is 22nd in the NFL. Pederson proclaimed during Monday’s press conference that he loves to run the football.

“I love to run the football. I think our guys are good at it, and we’ve been successful at it. But at the same time, we can’t get behind in football games because sometimes the running game won’t allow you to get back fast enough.”

This quote really isn’t true, however. Philadelphia has run 150 plays in the first half, with only 46 of them being designed runs. The 30.6 percent run ratio is actually less that what its doing for an entire game.

“If we’re having success running the football, sometimes we continue to run the football. I look at the beginning of the second half, I think there were seven runs in that drive. We ended up turning it over. Look, it’s definitely a fine line. You’d love to have balance. We just got in a situation where we fell behind, and even in the third quarter, it was 20-to-3 and we were working ourselves back.

We only had six plays in the first quarter. It just goes back to what I’ve said this past week. We’ve got to figure out how to start games faster, stay on the field longer, and generate points early in football games because if you go back to our history, the times that we’ve had success as a football team, we’ve been able to do that. We’ve been able to score on opening drives, get the lead early, which allows for your running game to really take over, play-action pass, all of that. That’s one of the ingredients that’s missing right now.”

Ajayi sent the message after Sunday’s game that the Eagles should run the ball more.

Is Pederson going to listen?

Allowing the offensive line to get into a rhythm doing what they do best is the easiest way for them to get back to where they were last year from a pass protection point of view.

Giants wide receiver Odell Beckham recently did a sit-down interview with ESPN on Sunday’s NFL Countdown with Lil Wayne where he expressed his frustrations with the Giants’ offense and how it has limited his production. Here were some of his comments transcribed via SB Nation.

“I don’t feel like I’m being given the opportunity to be the very best that I can, to bring that every single day, and that’s really all I want to do, to bring that every single day. Since I’ve been here I’ve put up numbers, records have been broken, and all those good things, not to say mean nothing to me, but I know they could have been double, or triple whatever they are now. That’s the part that bothers me.”

“Can he still throw it, yeah, but it’s been pretty safe and it’s been, you know, cool catching shallow and trying to take it to the house. But I’m, you know, I want to go over the top of somebody.”

Sounds like Beckham is jealous of some other receivers in the NFL.

“I feel like I’m being out-schemed, and I also don’t have a chance to like, do something. Oh, I gotta take a slant and go 60? Not to say it’s not fun, but I want those easy touchdowns too. I watch everybody across the league, all the top receivers get the ball the way they should, and if they don’t they say something about it.”

So Beckham got the contract he desired and repays the Giants by throwing their offense under the bus. Way to go! Maybe Beckham wants to be the quarterback.

As for his comments, nothing he said was inaccurate. Not only does he have to catch a lot of shallow passes due to Manning’s arm, but the offensive line isn’t capable of keeping Manning upright consistently for those deep passes to materialize.

“I publicly declared that I didn’t agree with [Odell Beckham Jr’s] comments and I asked anybody that was interested if they wanted clarification go to Odell, cause he’s a big man.”

If the Eagles’ pass rush can finally get going, maybe this is the week. What was supposed to be a unit of strength has been disappointing so far. Their pressure percentage of 23.1 percent is the third lowest in the NFL.

The Giants offensive line might be an abomination, but SaQuon Barkley isn’t. The Penn State product has become the third rookie in the Super Bowl era to record 100-plus yards in his first five career games, joining Adrian Peterson and Kareem Hunt. He is also currently one of four running backs with over 300 yards rushing and 200 yards receiving along with Todd Gurley, Melvin Gordon and James Conner.

“I haven’t seen a running back like that in a long time. I think he reminds me of a couple running backs. He has, like, shiftiness and quick feet like Marshawn Lynch and balance like LeSean McCoy. But then he also has speed like Jamaal Charles. He’s really a great combination as a running back.”

Defensive coordinator Jim Schwartz loves what he can do as a pass catcher.

“Barkley is a lot of times like a wide receiver. He’s a guy that can get two yards, three yards, four yards, and then all of a sudden break one for 38 or 60 or whatever he can do. He’s a big-play guy.”

PREDICTION: The Giants are allowing 4.6 yards per carry. There is no excuse for Doug to not run the ball this week. If the ratio is closer to 50/50 than 65/35, the Eagles will win. It’s the offensive line’s bread and butter to run block, let them dominate and get their confidence back in pass protection.