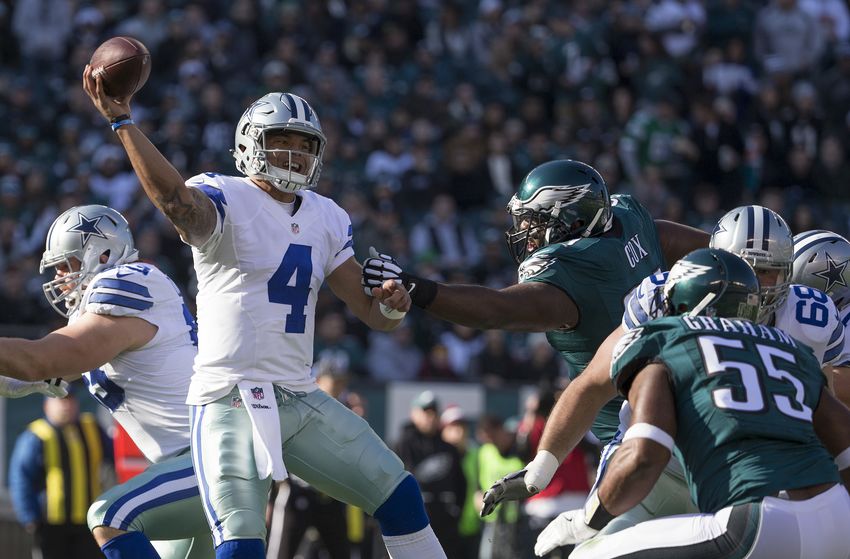 The Philadelphia Eagles announced earlier this week that they’d be wearing all black for Sunday night’s game against the Dallas Cowboys. Now that the attire for the funeral has been chosen, it’s time to put the nail in the Cowboys’ coffin!

Golden Tate will make his Eagles debut Sunday and I’m curious to see how Doug Pederson uses him. Tate leads the NFL in YAC since 2016 and with the offensive line struggling in pass protection this year, getting the ball out quick to him takes pressure off the men up front.

The Eagles also don’t currently possess a back who can drain the clock in the fourth quarter whenever they have the lead. When Philadelphia blew its 17-0 cushion against Carolina a few weeks back, Pederson called just one running play in the final frame. He has no faith in his running backs to pick up the critical first downs when necessary. Also in that game, Pederson called six short passes in nine plays while the Eagles were ahead in the fourth, which resulted into just 11 yards.

One of the biggest myths going around today is that Eagles would’ve won had they run the ball in the 4th. In the two drives they had the lead, the clock stopped just once in 9 plays.

6 of the 9 plays were short passes, de facto runs for the Eagles. pic.twitter.com/x7noMBGZaE

Tate would’ve taken a couple of those quick passes and gained extra yardage, possibly even moving the sticks a few times for some crucial first downs.

Pederson explained what he’s learned of Tate so far.

His ability to recognize and react to coverage. He’s a smart guy, obviously. One of the things that you see on film with him is his first-step quickness, then when you see it in person, it shows up. We all know about the yards after catch. He’s strong, former running back, things like that.

And really a guy that comes in here and – sometimes you don’t know about work ethic with different players, but being a veteran player, coming in here, embracing the offense, embracing his role this week, and what we’re asking him to do, he’s done a really nice job.

What should we expect from Tate in his first game with the Eagles?

I think there’s a fine line with how much we want to put him out there, because I want to be careful that I’m not doing him a disservice by putting him out there with something he’s uncomfortable with. So, making sure that we have a nice, tight plan for him is important this week …

Game plans are built throughout the week Wednesday, Thursday, Friday. We go into a Wednesday and say we’ve got a handful of plays, see how well he handles those. Then when we get to the situational part of the game, short yardage, goal line, third down, red zone, then we start putting our pieces together. Match-ups, all of that kind of stuff. And then building on top of what we did the day before, or carrying over a play that we had in on Wednesday, carry it over to Thursday or Friday.

Some of it is we build upon, and I would say a majority of it is just carryover throughout the game plan.

Pederson also delved into how Tate is different than slot receiver Nelson Agholor in terms of their skill sets.

“That’s the chess piece that we as coaches try to do each week is who’s going to be on the field and the match-ups and everything else. I think the skill sets, Nelson does some great things, straight-line speed, good route runner, smart guy. Golden, is kind of the same way. He’s probably a little more of the short-to-intermediate type guy, a little quick twitch. They’ve used him out of the backfield before and things like that. Similar styles, but also in some aspects a little different.”

Alshon Jeffery believes Tate will be the Eagles’ “secret weapon.”

“He’s going to be our secret weapon. I’ll tell you that.” Alshon Jeffery on his impressions of new teammate Golden Tate. pic.twitter.com/6Gnk77YN3B

Jeffery will be squaring off against Byron Jones in an intriguing one-on-one matchup. The safety turned shutdown corner, Jones, is long and super athletic. Dallas is playing a lot more press coverage this year and Jones is thriving in it. He disrupts the timing between the wide receiver and quarterback at the line and even if he is beaten off of it, he has the athleticism and make-up speed to catch that wideout. The only thing lacking in his game is a pair of soft hands because he’s not racking up the interceptions.

Jeffery will have his hands full, but he and Zach Ertz have carried the offense in 2018 so far. Bringing Tate in should make the offense more versatile, which has lacked this year after seeing the wealth spread out so much in 2017.

Right tackle Lane Johnson was supposed to be out a month with a Grade 2 MCL sprain, but he’s going to try and give it a go on Sunday.

Is this the week that Josh Adams becomes the featured back?

Adams led the team in carries (9) during the Eagles’ Week 8 win over Jacksonville in London and averaged 6.8 yards per carry. He showcased vision to see the holes that the offensive line has consistently generated and the feet to get to them. Wendell Smallwood averaged just three yards per carry, 24 yards on eight runs, and Corey Clement and even worse 1.5 with six yards on four totes.

The holes for the running backs have been there. The Eagles OL continues to open them up and generate push, but since Jay Ajayi’s injury, Corey Clement and Wendell Smallwood haven’t showcased the vision to see them and feet to get to them.

“We liked what Josh did the other day. He needs to take care of the ball in that one circumstance a little bit more. That was a little bit closer than we all would like, but Josh has done a good job when he’s been given the opportunity. That’s what you want from everybody. Hey, just keep working, and when your opportunity comes, try to maximize it.”

“He’s got good size, and he’s been running downhill, running behind his pads, and making guys miss. For a big guy being able to stick his foot in the ground and make the first one miss or break a tackle, he’s done a good job of that. He’s got good hands out of the backfield, and he’s been on his assignments from a protection standpoint, which is the hardest thing for most rookie backs to do, and he’s been on it, and he’s demonstrated that in practice and earned people’s trust.”

While the Eagles gave up a third-round pick for a half of season of Golden Tate, the Cowboys spent a 1st-rounder for Amari Cooper, who is 24 and likely be extended this offseason.

Cooper caught five balls for 58 yards and a touchdown in his Dallas debut Monday night. He does an outstanding job of creating separation at the route stem and using his lateral agility and change of direction skills at the top of his routes.

He gets the separation, but can Dak Prescott get him the ball? Because Derek Carr couldn’t get it to him in Oakland.

Prescott overthrew him for a would-be touchdown and then attempted to force it to him in the red zone, which led to an interception in Monday’s 28-14 loss against Tennessee.

The Eagles will be without Jalen Mills (foot) and Sidney Jones (hamstring) this week. Rasul Douglas will get the start for Mills, but we’ll see about the slot cornerback position. Philadelphia attempted to use Dexter McDougle there in London and he was so bad, he got cut. Cre’Von LeBlanc was picked up as a free agent this week.

Cowboys owner Jerry Jones has remained adamant that Prescott will be extended.

Please do, Jerry! Prescott’s last 16 games hasn’t been far off from where Kevin Kolb was his final 16 contests. Shoutout to @EaglesFansProbs.

Not only will the Eagles have to worry about Ezekiel Elliott, but Prescott is a threat with his legs as well and the Eagles haven’t exactly stopped those big quarterback runs from occurring. With the Eagles facing a couple scrambling quarterbacks this year in Cam Newton, Andrew Luck, Marcus Mariota etc, they’ve allowed 4.5 yards per carry, which is 21st.

Schwartz went into detail about why the quarterbacks are gashing them.

“I think the big plays are probably the biggest thing. Quarterback scrambles really fall into like two categories that as a defensive coordinator you get concerned about. One is when they’re scrambling for 1st downs, moving the sticks, but we saw Bortles do that, that was probably their best way to move the sticks. And then the other one is explosive plays, those +20 plays, and we’ve seen some of those.

It’s layered in so many different ways. If you blitz, sometimes there’s air and there’s room for those guys. That was probably more Andrew Luck. Other times you’re playing zone and you’re defending deeper routes and you’re back and then you’ve got to close space. Each one is a little bit different. But I don’t think it’s a secret to say that that’s one of the things we have to do a better job with. And really in my mind, it falls in two ways: keeping them from scrambling for 1st downs, particularly 3rd-down conversions, and then the long runs, take those off the board.”

Elliott has struggled in recent weeks, averaging just 3.3 yards per carry over his last four games. He’s seen a lot of eight-man boxes this year with Prescott’s inability to push the ball downfield. One of the keys to the game is what happens on first down. Dallas averages 5.2 yards per carry on first, the fifth-best average in the NFL, while the Eagles are 21st in first-down rush average allowed at 4.51, which is up from last year’s 3.37 number.

Prediction – With the Cowboys heading the Philly coming off six days of rest compared to the Eagles, who are coming off a bye, I don’t like Dallas’ chances. Look for the Eagles to have a two-touchdown lead after three quarters and actually hold one this time, because Dak Prescott stinks! I see Josh Adams and newly-acquired Golden Tate in the screen game as key clock churners in the fourth as the Birds close it out.