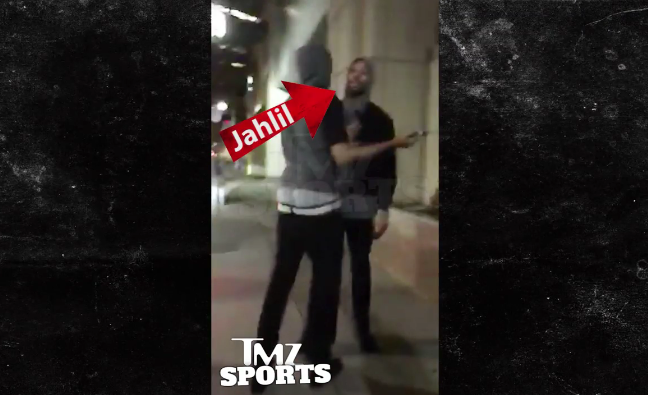 You want some dessert with your Eagles loss? Look no further than the following video, which is apparently Jahlil Okafor getting into a fight outside a bar in Boston last night, hours after the Sixers fell to the Celtics.

The details, via TMZ:

NBA superstar Jahlil Okafor — the #3 pick in the 2015 draft — punched a guy in the face HARD outside of a Boston bar last night … and TMZ Sports has the insane footage.

It all went down after Okafor and the 76ers lost to the Boston Celtics — Jahlil and some friends went out on the town … and ended up in an altercation in front of Storyville Boston nightclub.

19-year-old Okafor was screaming at the other man, “We got money you broke ass n**ga.”

A scuffle ensues — people tried to hold Okafor back — but then he escapes and swings wildly at another man … connecting … and sending him flying to the ground.

In the melee, Okafor tumbles to the ground and a man in a green jacket tries to punch the 6’11” superstar in the back of the head.

We’re told everyone got up and fled the scene and no arrests were made.

We’re told the altercation began because one of the men in the other group yelled at Jahlil, “The 76ers suck.”

We spoke with a rep for Jahlil who tells us … Okafor says he was being heckled from the moment he left the club and felt threatened because people swarmed him on the street.

He says he was with a teammate — who he wouldn’t name — and says someone got physical with the teammate … so Jahlil did what he felt he needed to do to protect himself and his friend.

They immediately left after the incident.

Clearly, this isn’t good for anyone involved. Will Okafor get suspended? Probably. He should definitely. That really does look like him, but whether it’s an old video is still an apparent discussion among Sixers fans, from what I’ve heard. Although, TMZ says it spoke with a rep for Okafor, which kind of corroborates this happening last night. The Sixers haven’t made a statement yet. Add another punch to the gut. BUT NOT LITERALLY, PLEASE!