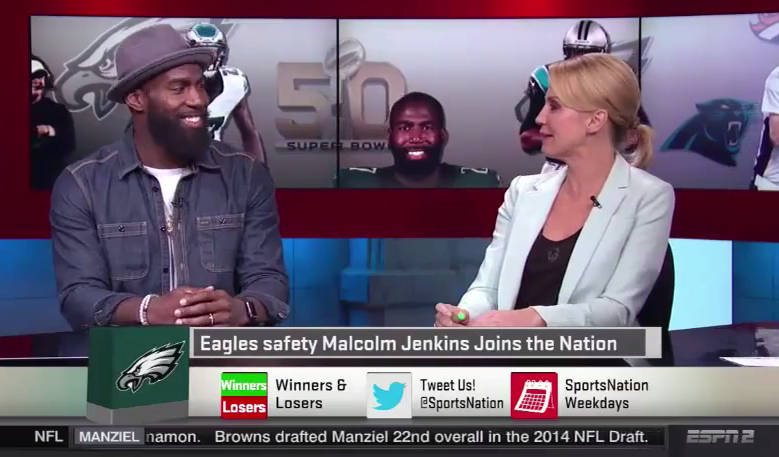 Malcom Jenkins appeared on SportsNation today on ESPN2 to talk about his experience in this past weekend’s Pro Bowl, but the beginning of the conversation had to do with Chip Kelly and his unceremonious departure as head coach of the Eagles. Here’s what Jenkins had to say about why Chip Kelly just didn’t fit as the head coach of the Philadelphia Eagles.

I think it was a tough year, man. There’s a lot of different things you can point out, but as far as Chip and probably the biggest reason in which he’s not in Philadelphia anymore, I think, is just his ability to communicate with the players. And I think, if you’ve ever walked with or sit him down and talk to him on your own, he’s a great guy. He’ll listen. I’ve had multiple conversations with him, whether it’s been good or bad, and he’s open to listen to his players, but he’s not proactive enough to really get the pulse of the team. Especially when you have the off-season that we’ve had last year, you know, he’s getting rid of guys and making all these changes. When you have a situation like that, you have to be able to communicate with your players to instill confidence in them so that they know that their jobs are secure and that they can trust you. It just wasn’t there.

When there’s a lot of turnover like that, you want to be able to have guys comfortable enough to say what’s on their minds. Say what they like and don’t like. And when you’re bringing something new especially to the league, you have to have that communication and it just wasn’t there.”

Jenkins also went on to say the issue with Chip and racism was overexaggerated, and said it only came from people who were upset that they were no longer a member of the Eagles.

Video of Jenkins’ entire segment is below.