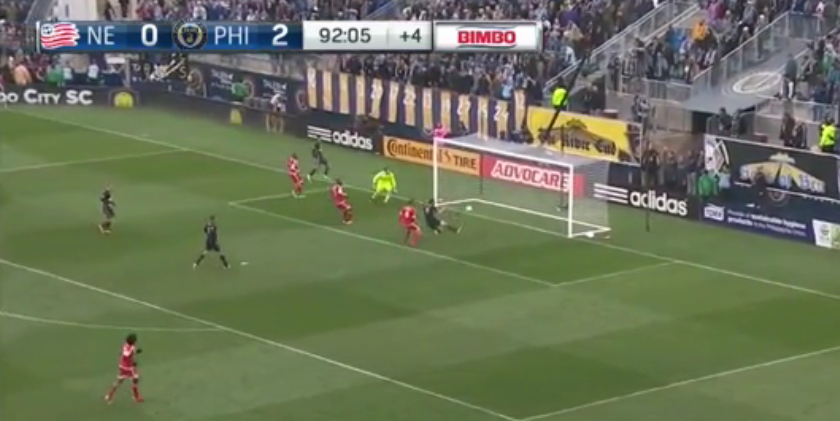 Scott Kessler will be providing Philadelphia Union coverage here at Philly Influencer this season. Give him a follow on Twitter.

CHESTER, PA — Two C.J. Sapong goals, improvement from Ilsinho and the starting debut of Roland Alberg helped to propel the Philadelphia Union to a home opener victory over the New England Revolution.

Despite two missed penalty kick attempts, the Union held on to a two goal lead that the team built in the first half, with Sebastien Le Toux adding a third in the 90+3 minute. Sapong scored his first goal off of a deflected shot that went to the left of Bobby Shuttleworth, the Revolution goalkeeper.

Later in the first, a pin point cross by Union midfielder Warren Creavalle was gathered Sapong in the box and slotted home past Shuttleworth once again. The brace was Sapong’s first in nearly three years, back when still employed by Sporting Kansas City.

Brazilian playmaker Ilsinho won a penalty kick due to clear obstruction by New England defender Andrew Farrell just inside of the Revolution box. Ilsinho tried to beat Shuttleworth to the goalkeepers right, but was easily stopped. Ilsinho, 30, had his best game in a Union jersey as he appeared to have progressed in his fitness training.

The other penalty kick was taken by Le Toux, who stepped up to the spot despite Sapong sitting a goal short of a hat-trick. Le Toux, who scored the one and only Union hat-trick back in 2010, missed his first ever Major League Soccer penalty kick attempt. The French forward’s shot was low and right down the middle of the goal, enabling Shuttleworth to drag his legs for the save. Le Toux would eventually redeem himself in second half stoppage time, finishing off a cross to increase Philadelphia’s lead to three.

Alberg contributed to a robust Union attack, making his way into the starting lineup for the first time as a Union player. Combing with Ilsinho in the center and right side of the field, Alberg took open space and created multiple opportunities for his teammates to make back shoulder runs or take advantage of reeling defenders.

The Revolution could not overcome the halftime deficit of two goals despite holding 60 percent of the possession, due mostly to a straight red card handed out to Je-Vaughn Watson. Referee Nima Saghafi went to his pocket with little hesitation in response to Watson’s studs up challenge on Alberg.

Heading into MLS Week 4, the Union have two wins in three games, bettering last year by nine matches – and also obtaining six points in the process, versus six points in seven matches in 2015.

The Union head to Toyota Park to visit the Chicago Fire, lead by former Philadelphia midfielder Veljko Paunovic, on April 2, at 5:00 P.M. ET.