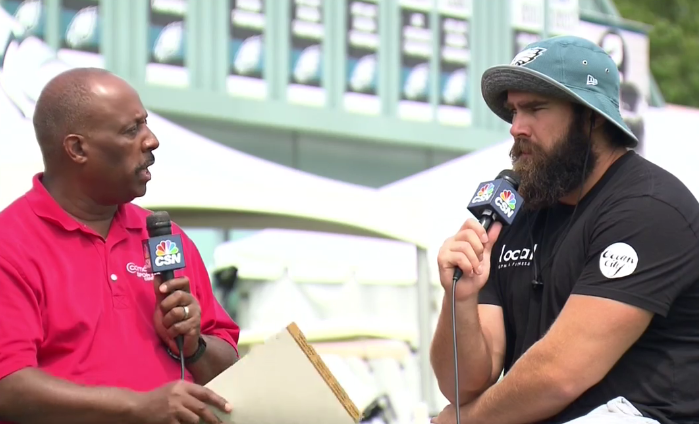 Jason Kelce knows he didn’t have a great season last year. He’s made it known publicly he will do his damnedest to put that behind him as he looks forward to this season. And with Doug Pederson at the helm, it sounds like Kelce is having a really good training camp.

On Friday’s edition of Quick Slants, Kelce sat down with CSN’s Derrick Gunn and talked about the difference between Doug Pederson’s practice and Chip Kelly’s practice and which one he prefers.

“That’s tough to answer. I think they both are challenging in their own ways. They both bring their own little nuances to it. Obviously, when you’re with Chip, everything is go, go, go, go, go, so you don’t really have time to regain your composure, regain your breath. And it’s structured like that because that’s the way the game is. That’s the mindset that they try and put you through [in] practice, and they’re shorter.

“Obviously with Doug’s, and with the Andy Reid system, you’re slowed down quite a bit. They’re a lot more long, they’re more physical, they’re more grueling. And it’s set up to be like that so you have more time to regain your stamina.

“Having said that, I probably prefer- I don’t know, for some reason, I’ve been having a lot of fun this camp. And I think that a big part of that, first of all, it’s very physical so it’s very competitive every single day. Second of all, as a big guy as myself, sometimes we get winded, having that little bit of a huddle every once in a while helps out.”

Not surprising. We’ve heard the same thing from other players regarding Chip’s practices. While Chip seemed to be at the forefront of how coaches now run their training camps and practices, players on the Eagles seem to prefer Pederson’s style to his predecessor’s. And that includes hitting. Does Kelce think that’s needed?

“Obviously we feel it is. So, we’re doing it. Whenever you go live – meaning full tackle to the ground, football, football – it makes things a little bit more intense. And it’s not just the running back trying to break tackles and stuff like that. It makes the whole drill more intense. It makes you more competitive. This is real. It’s our job to make sure that this guy does not hit that running back … I think it brings a lot more competitive[ness], a lot more intensity, a lot more effort to the drills especially on the defensive side of the ball.”

But, of course, that means the likelihood for more injuries increases. We saw Zach Ertz get frustrated yesterday after defensive players went low on him and Jordan Matthews – and not for the first time, either. So, does Kelce think there should be as much hitting and tackling as there is?

“That’s the downside. Obviously, you’re going to have a few more injuries. You can’t have it both ways. Either you don’t hit and you try and stay healthy, but then you’re kind of sacrificing a little bit of that edge to a defense, especially. And really, just fundamentals of running to the ball and tackling.

“Or you hit and you can’t tell a guy that it’s a live situation and to tackle, in my opinion, while also telling him to be smart and not go after somebody. Unless it’s a very obvious defenseless player. That’s just the constant battle we’re fighting right now.”

And what does he think about the offensive line? He’s a lot more optimistic than most.

“This is the deepest I’ve seen our offensive line in a long time. We signed a few guys in the offseason. We drafted some rookies. I think across the board, outside of the starters, we have other guys that could easily be starting for other teams in my opinion. I think this is the most deep offensive line I’ve seen since being with the Eagles.”

Kelce also talked about Chip’s offense, Mike Vick’s and Nick Foles’ role in that offense, his relationship on the field with Sam Bradford, audibles and more.

Watch the entire segment below.