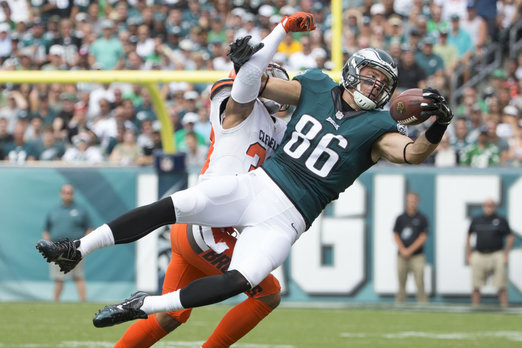 Though the story of the day, and week, was all about Carson Wentz’s first NFL start, the Eagles came away from Sunday’s game against the Browns with some sobering news. They could be without their starting tight end and starting cornerback next Monday night in Chicago. Zach Ertz had a rib injury that sounds pretty damn painful, and Leodis McKelvin is nursing a hamstring injury. [NJ.com]

Ertz suffered what head coach Doug Pederson called “a displaced rib under his collarbone.” McKelvin has a strained hamstring. Pederson said both players were “week to week.”

If Ertz, who caught six passes for 58 yards in the win over the Browns, cannot play, veteran Brent Celek would get more time and No. 3 tight end Trey Burton would also see a lot of work.

Ertz’s injury occurred in the first quarter of Sunday’s game after he made a catch along the Browns’ sideline and took a hit to his left shoulder. He remained in the game.

McKelvin, a starting cornerback, would likely be replaced by rookie seventh-round draft pick Jalen Mills who saw action in sub packages Sunday against the Browns. Ron Brooks would likely remain as the nickel back.

I’ve got Ertz on my fantasy team, so that’s not good. And Doug Pederson said it would be dangerous for Ertz to play with that injury earlier today during his press conference.

And even if Jalen Mills is able to jump into that starting role in Chicago, losing McKelvin would likely be a temperate blow to the defense.