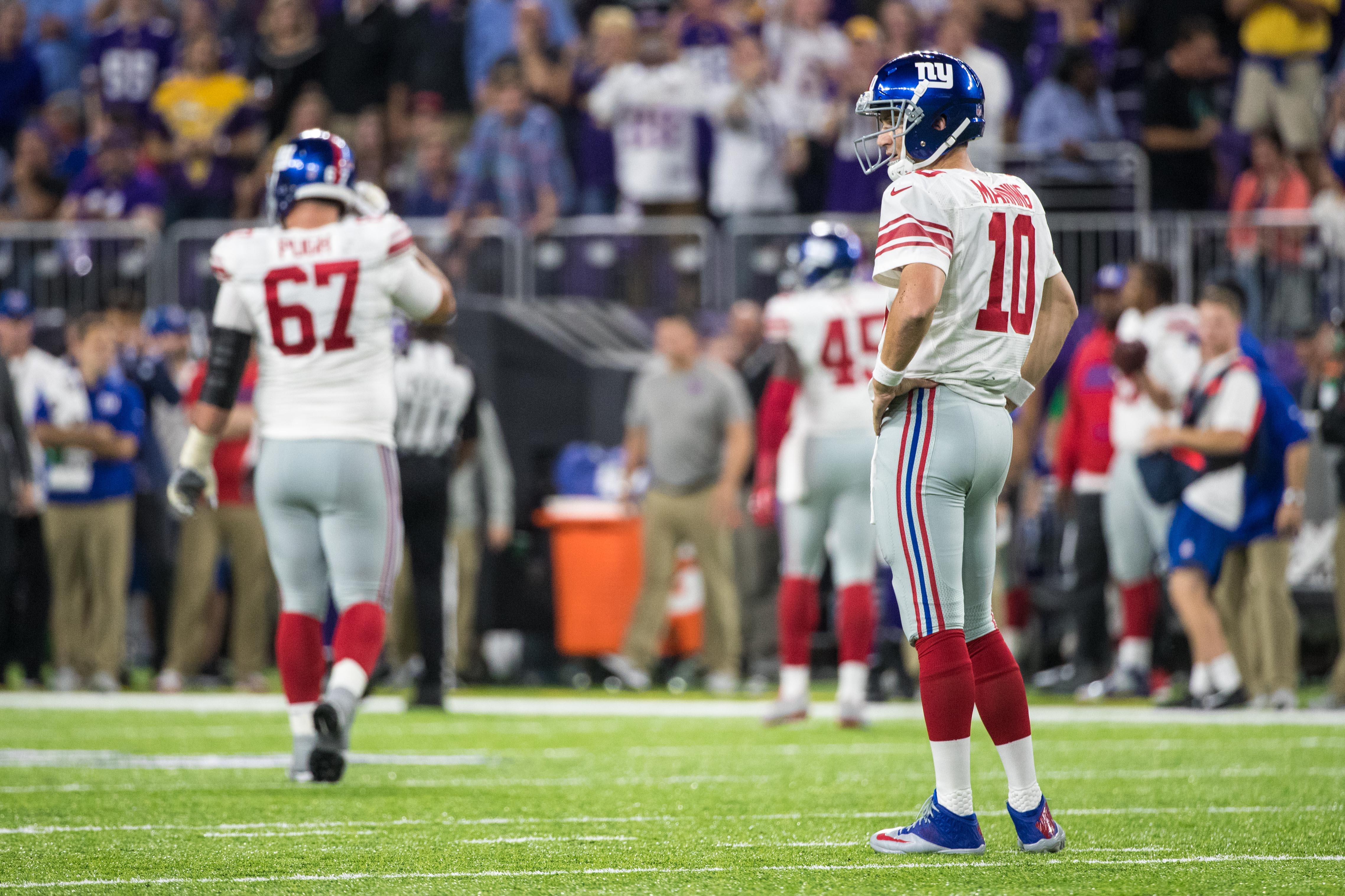 Hello ladies and gentleman, welcome to another round of Beat of the East. Last time out we reviewed Week 4. Now let’s dig into the all-important week 5 matchups for the rest of the division. Last week we went 3-3 on winners and 2-1 against the spread, let’s see if we can do even better this time around.

Dez Bryant didn’t practice on Wednesday, leading to questions about whether he’ll play this week or not after suffering a knee injury in week 3. I don’t think it’s going to matter. While Cincinnati fought their way back to 2-2 with last week’s win over Miami, going on the road to Jerryworld isn’t going to do them any favors. The Bengals are in the top 15 (barely) in terms of rushing defense, but with the way that Elliott is playing right now I don’t see how they’re going to do much to stop him. The offense has been stagnant for Cincinnati, averaging only 19.5 points per game, nearly 6 less than Dallas. Both defenses have played well with a slight edge to the Cowboys. The Vegas line in this one screams Cincy with the Bengals being a -1 road favorite at last look; but I can’t talk myself into it. Everything about this game points to Dallas, at home, better offense, better defense and a better record. I just don’t know what Vegas is seeing that I’m not. I’ve got to go with my gut here.

This is likely going to hinge on what A.J. Green and Andy Dalton can do against a Cowboys team that is surrendering 263.5 yards in the air as Dallas ranks 11th in yards allowed per game against the run. The best place to attack the Cowboys is through the air and it’s going to be on Green and Dalton to lead the charge. If Eifert is healthy enough to play that could swing the tide a bit towards the Bengals as well.

Using my handy scientific method of comparing the scoring and points allowed of each team vs. the league average and factoring in home field advantage we come up with the PhillyInfluencer.com predicted score of Dallas 26, Cincinnati 20.

If betting were legal: Take the Cowboys plus the points.

The name of the game here for the Giants remains the same…turnovers. The Giants are tied for the 5th most giveaways in the league. In their last two weeks (both losses) they have faced two of the top 5 teams in terms of takeaways in the league. Minnesota leads the league at 11, and Washington comes in tied for 5th in the league with 8 after 4 weeks. Now both of those teams also are fortunate to have faced the G-men who are giving the ball away at an alarming rate, but they’ve produced plenty of turnovers outside of those games this year. The Giants get a bit of a reprieve this week in the form of Green Bay who ranks 28th in the league in turnovers. That’s a huge plus for New York.

Given all this information it’s particularly interesting that Green Bay is a 7.5 point favorite in this game. Yet I’m fairly convinced that’s not a totally unreasonable number. Green Bay has managed to do something that the Giants haven’t done enough of this year…score points. New York comes in averaging only 18.3 points per game, and while I expect them to score more than that in this game, I don’t think it will be enough. Green Bay is averaging 25 points per game and comes in fresh and off the bye week while the Giants just endured another grueling NFC North opponent in Minnesota.

If betting were legal: Take the Giants plus the points.

Washington faced Cleveland in a pretty grueling affair last week (at least for much of the game) before pulling away in the end to score the win and move to 2-2. Baltimore fell for the first time last week dropping to 3-1. Again Kirk Cousins looked very solid for Washington which is a huge plus if you’re a ‘Skins fan. He’s improved his touchdown total every week going from 0 to 1 to 2 to 3. He also had his highest completion percentage of the year last week. Now again, let’s be realistic, that was against Cleveland. The Browns are allowing the 6th most points in the league. Baltimore on the other hand has quietly returned to defensive dominance. They are ranked 3rd in the league in passing yards allowed per game and 5th in the league against the run. They also happen to be the 7th defense in terms of points allowed. None of that is good news for Washington.

What Washington has going for them is that the Baltimore offense, while not inept has not been good.  The Ravens have alternated bad scoring weeks (13, 19) with good ones (25, 27) if the pattern holds true they won’t crack 20 in this game. However, that’s not what I’m predicting here. I believe patterns are meant to be broken, and I think we’ll see a big game out of Baltimore here. Prediction: Baltimore 28, Washington 21.

If betting were legal: Take Baltimore laying the points.

Each week I’m going to take a look at three of the NFC East players/coaches that are flying high, and three that have come crashing to Earth a bit recently.

Elliott has gone over 130 yards for two straight weeks. He’s been the engine of the Dallas offense and looks absolute tremendous. His per-carry average has gone up each and every week from 2.6 YPC in week 1, 4.0 in week 2, 4.7 in week 3 and 6.0 last week. His “fumbling issues” which were totally overblown (he had 2, 1 lost, in game 2 and none in any other game) seem to be a thing of the past as Zeke hasn’t put the ball on the ground in two weeks. He’s also playing a small, but effective role in the passing game with at least one 15+ yard catch in each of the last two games. Elliott is a freak of nature.

I have to give credit where credit is due. Gruden weathered the storm of benching Griffin for Cousins last year. He weathered the storm of Cousins, and the ‘Skins as a whole, starting slowly here in 2016. But he’s got them on a two game winning streak including a big division win. More importantly a team that was outscored 65-39 over the first two games has outscored opponents 60-49 over the last two. He’s totally flipped the script and has the Redskins playing much better football. At this point they’re a bigger threat in the division than the reeling Giants in my opinion.

It sounds crazy to say that Beckham is on the rise. I give him credit; he said exactly what I said in this column earlier in the week. Beckham hasn’t changed; the media has created a perception change in the way he’s viewed. Beckham was a diva receiver when he was making one-handed catches that blew our minds, and he’s still a diva receiver…we’re just more cognizant of it now. Beckham has admitted that maybe he needs a bit of an attitude adjustment. I can’t disagree. But maybe we need to put a little bit of blame on the guys on the field who are drawing the outbursts out of him like Rhodes or Norman. I get that their job is to stop Beckham any way possible, but we can’t lambaste Beckham for reacting, most sane people would. I’m staking my claim that this week is a big week for OBJ. I’m saying he’s over 100 yards receiving, with multiple TDs.

Ben hasn’t had a good last two weeks…really a good season if you look inside the numbers. He probably hasn’t handled the Beckham situation well. He’s allowed too much dirty laundry in the media. All of that is secondary. I’m worried about the on-field, the X’s and O’s. McAdoo is supposed to be a bright offensive mind. Right now the numbers aren’t showing that. The Giants are averaging 10 more yards per game to this point in 2016 than they did in 2015. However, it’s not translating to points. An offense that scored 26.3 points per game in 2015 is averaging 18.3 in 2016. We covered earlier this week how Odell Beckham is a notoriously slow starter, but that doesn’t explain everything. With the return of Victor Cruz, who has been surprisingly effective, and the arrival of Sterling Shepard the Giants passing game should be humming right now; and it’s not. McAdoo needs to get the ship righted, and fast.

Manning actually has a higher completion percentage and higher yardage total than he did through his first 4 games in 2015. That’s where the pluses end. In his first four games of 2015 Eli was throwing an interception on less than 1% of his passes at 0.7%. Through the first four in 2016 that rate has nearly quadrupled to 2.63%. His current interception percentage was roughly the league average in 2015. But New York can’t afford for Eli to be league average. His touchdown percentage has dropped while his interception percentage has risen. For the sake of comparison in 2015 through 4 games his percentage was 4.9%. That percentage was well lower than the impressive 5.7% he’d finish the year with. So it’s safe to say that Eli started a bit slowly in 2015. This year through those same 4 games it’s 2.63%. That’s a monumental drop, particularly considering that the first 4 games were significantly lower than his final number. If he retained that same 4.9% rate as he did in the first for of 2015 he’d be tied for 11th in the league this year with Carson Wentz and Philip Rivers. Not bad company. Instead he’s currently sitting at 33rd. Keep in mind there are only 32 NFL teams. Yikes.

Which of you out there were sad when Jackson got cut? If you were raise your hand. I’m raising mine. I still think it was a terrible mistake, but at this point it’s pretty obvious that Jackson isn’t the player that he once was. He’s still second on the Redskins in receiving yards, but he’s 4th in catches. Beyond that his totals are highly inflated by his first game. After 6 catches for 102 yards in the first game of the year Jackson has managed only 9 catches for 141 yards since. That’s over 40% of his production in one game. DJax has to step up if Washington is going to keep rolling and be viewed as a viable threat.

Well folks, that’s it for this week. Don’t forget to check out all the other great content here at the site. Our writers are second to none. I’ll see you next week with a review of week 5, thanks for reading. Want to discuss the column, or football? Find me on twitter @faux_philly. Thanks for reading and have a great weekend of great football!