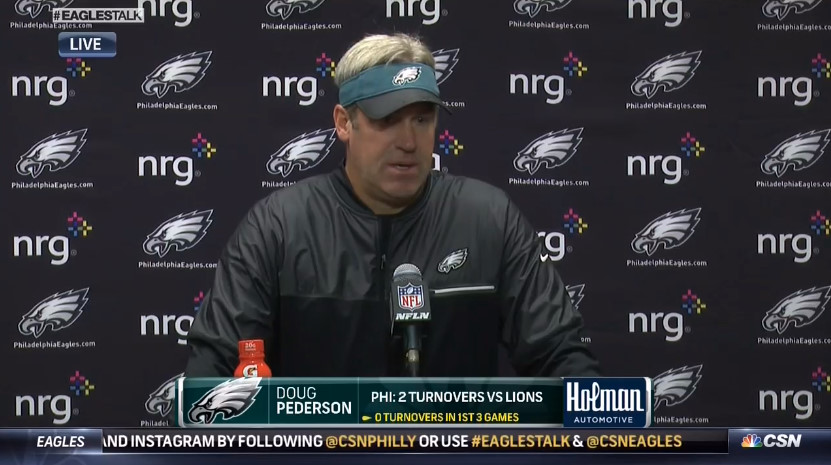 Before the season began, I would’ve taken 3-1 after four games all day long. And that’s where we sit today.

But there’s also something to be said for the kind of losses your sports team endures, and yesterday’s Eagles’ loss to the Lions flat out sucked. They were in command and likely to rely on their defense to preserve the lead before Ryan Mathews fumbled and, even if the ball hit Jason Kelce while he was out of bounds, the Eagles couldn’t recover.

Watching the Cowboys and Redskins rack up wins doesn’t feel great, either. It’s still early in the season, but the Cowboys look like a really good football team. The Redskins are hard to read because they’re never consistent. I could say the same about the Eagles. The Giants look like a team lost after beginning the season 2-0.

So, this morning, during his weekly appearance on the WIP Morning Show with Angelo Cataldi, Eagles head coach Doug Pederson was Captain Gung-Ho. You can listen to the entire interview below, but here are some quotes from Dougie P. [CBS Philly]

“Hey, are we still 3-1? Okay, good … It’s a tough one to stomach, it’s a tough one to take, but let me tell you something — what we over came, offensively, defensively, in the second half to put ourselves in position to win this football game. You have to credit the team for that, you have to credit the guys for that. The effort, the attitude on the sideline. Even after [in] the locker room, the positive nature of the guys was tremendous to see. No pointing fingers and listen, it’s tough. We felt like we should have won the game, but you know what, this is the National Football League.”

It is the National Football League. And every loss does matter, but Pederson’s got me feeling pretty good today.