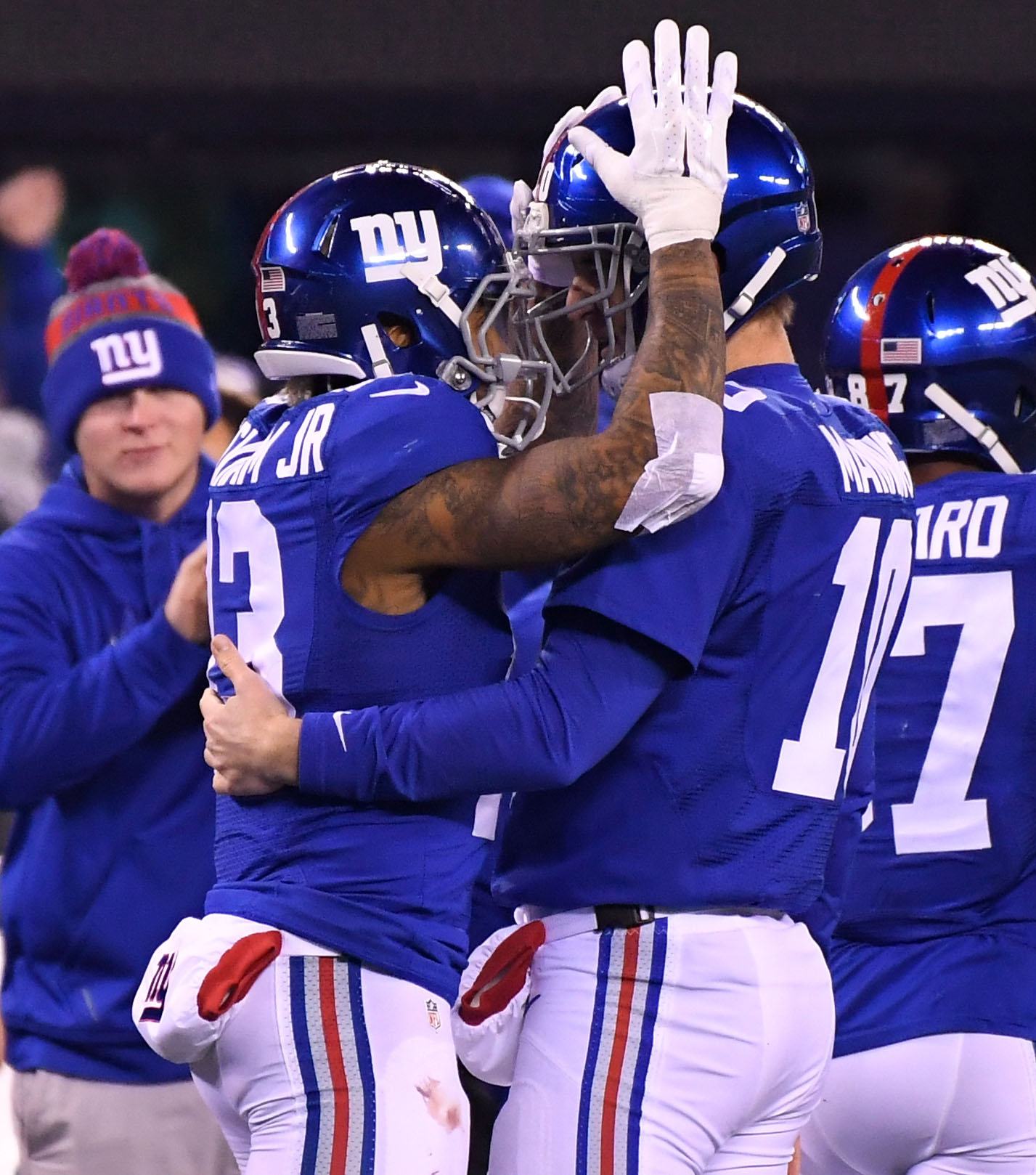 Hello ladies and gentlemen, welcome to another round of Beat of the East. Let’s review where we are with predictions: 14-8-1 with winners and losers and 10-13 against the spread after a 1-1 straight up and a 1-1 against the spread in Week 14. Thankfully, I finally nailed down Washington! Let’s review what happened in those games, and check out the slate for this week, and see if we can’t get another ‘Skins game right!

Dallas not only failed to cover for the third straight week after 11 in a row of covering (or pushing), they failed to win the game. A Giants team that looked totally fraudulent against the Pittsburgh Steelers a week prior came out and laid the wood to Dak Prescott and the Cowboys. The Giants won the game and moved to 9-4 on the year. Barring an epic collapse, they’ll make the playoffs. I thought Dallas would score 31 points against New York, but they only mustered a measly  seven. Very impressive showing by a Giants team that still needed to prove they were for real. The Redskins did what they were supposed to. They beat a bad football team. Make no mistake, that’s what the Eagles are right now. I predicted a six point ‘Skins victory here, they won by five. 27-22. The Eagles had a chance in the end, but couldn’t get it done. How many times have we said that since the Detroit game?

Ezekiel Elliott once again showed why he’s not just the Offensive Rookie of the Year, but how he’s deserving of the MVP award last week against the Giants. Let’s be realistic here: This Cowboys team isn’t nearly as dynamic without Elliott. He’s an absolute stud who has kept this team going all year long and taken so much pressure off of his fellow rookie in Prescott that the latter has flourished. This week, they take on an 8-5 Tampa Bay team fighting for the NFC South crown with the Atlanta Falcons. People haven’t paid a ton of attention, but the Buccaneers have won five straight. Over that span, they’re allowing only 12.8 points per game. They held the Saints to 11 points last week. And they’ve knocked off the Seattle Seahawks and Kansas City Chiefs in that span. This Bucs team is for real.

How Tampa Bay can win: They have to keep playing the type of football they’ve been playing the last few months. Bucs head coach Dirk Koetter, the guy I wanted instead of Chip Kelly, has his team playing exceptionally well. Jameis Winston is doing what his team needs him to do to win. He’s making plays at the right times and managing the game well. After eight interceptions in his first four games, Winston has only four in his last nine. Koetter stressed early the importance of Winston taking care of the ball better and clearly his quarterback has listened as Tampa Bay has gone 7-2 during that stretch, with one of those losses coming in overtime. If their defense can continue to force turnovers – they have eight interceptions in their last four games – they have a chance to knock off Dallas. This is not an easy game for Tampa Bay, but it is winnable.

How Dallas can win: Dallas has to get Prescott playing well. He’s struggled the last three games, failing to go north of 200 passing yards in any of them and throwing only three touchdowns in that span with a pair of interceptions. It’s particularly surprising given that he’d thrown for 13 touchdowns against two interceptions in the five games prior. He’s played in two division games against opponents who had seen him before and a stout Minnesota defense in that span so that might explain part of the problem. But with the way that the Bucs’ defense has been playing of late, Prescott has to be better or the calls for Tony Romo are only going to get louder in Big D. I don’t think that this is the week that it happens, though. I believe Tampa continues rolling.

If betting were legal: Take Tampa Bay plus the points.

Carolina is reeling, and Cam Newton is a big part of the reason why. The reigning MVP got his one of his best weapons back in the form of Kelvin Benjamin but has struggled mightily. After throwing for 35 touchdowns with 11 turnovers in 16 games last year, he’s thrown for only 15 touchdowns this year with the same 11 turnovers in only 12 games. His completion percentage has dropped by over six full points to a career low 53.5%. Many have pointed to the loss of Josh Norman, who, by the way, plays for Washington now and will be highly motivated against his former team, as a reason for the massive drop-off in Carolina. I think that it starts and ends with the performance of Superman himself. Washington is playing solid football as they try to steer themselves towards a second straight playoff berth.

How Carolina can win: They need to invent a time machine and go grab 2015 Cam. That Newton was an absolute stud. This Newton just isn’t getting the job done. Maybe the Broncos gave the world a blueprint for how to stop him in the Super Bowl. Newton hasn’t been right this season. He’s got to play like he did against San Francisco in Week 2 when he threw for over 350 yards and four touchdowns. The ‘Skins have a very potent offense, and the Carolina corners are going to have to hold up against a very good aerial attack.

How Washington can win: The Redskins need this game; they’re currently on the outside of the playoffs looking in. There is the potential that after this weekend’s games, the Seahawks, Redskins, Packers, Vikings, and Bucs could all be sitting at eight wins and within a half game of each other for two spots. Rob Kelley is going to be a key in this one. The Redskins are going to need to establish the run against the fifth best run defense in the league. The running game will allow them to control the clock and set up arguably the best play-action game in the entire NFL. The Panthers rank 30th against the pass, so there are plays to be made against this team.

I feel the way about the Giants how Jerry felt about George’s eyesight on Seinfeld. “You’re eating onions, you’re spotting dimes, I don’t know what to think!?” The Giants are getting thrashed by the Steelers and then they’re beating the Cowboys. I don’t know what to think! The Lions have made their living this year by winning games in the 4th quarter. I don’t feel particularly strongly about either of these nine win teams. Stafford is high on many people’s MVP lists, but to be honest I think his candidacy is overblown. He’s ninth in yards, ninth in completion percentage, twelfth in touchdowns, and tenth in rating. He’s built up steam based almost entirely on 4th quarter comebacks and low expectations for the Lions. To me those aren’t the qualifications for MVP. My top three for MVP are Elliott, Tom Brady, and Derek Carr who has similar, but better numbers compared to Stafford in the toughest division in football. So which of these smoke and mirror teams are likely to emerge victorious?

How Detroit can win: MVP candidate Matt Stafford has to play better. He’s got four touchdowns in his last four games and eight in his last seven. People don’t seem to realize that after throwing 14 touchdowns in his first six games his production has fallen off a cliff. After throwing for more than two touchdowns in four of his first six he has failed to throw more than two in all of the last seven games.  In a squeaker last week against Chicago he mustered only one touchdown against two picks. He’s going to have to actually play well for Detroit to win against a suddenly very fearsome Giants defense.

How New York can win: Eli Manning has been the “anti-Stafford”. While Stafford did most of his statistical damage in the first six games, Manning has done most of his in the last six. Manning mustered only eight touchdowns against six picks in the first seven games. In his last six he’s thrown for 15 touchdowns against only seven interceptions and only one time (last week) has he thrown fewer than two scores. Against a middle of the road Detroit passing defense, Odell Beckham and Manning have the potential for a field day. I see both of these teams as pretenders, but I think Detroit is the bigger fraud.

If betting were legal: Take New York laying the points.

Well folks, that’s it for this week. Don’t forget to check out all the other great content here at the site. Our writers are tremendous and tackle some really strong content. I’ll see you next week with a review of all the week 15 action in the NFC East, thanks for reading. Want to discuss the column or football in general? Find me on twitter @faux_philly. Thanks for reading and have a great weekend of great football!