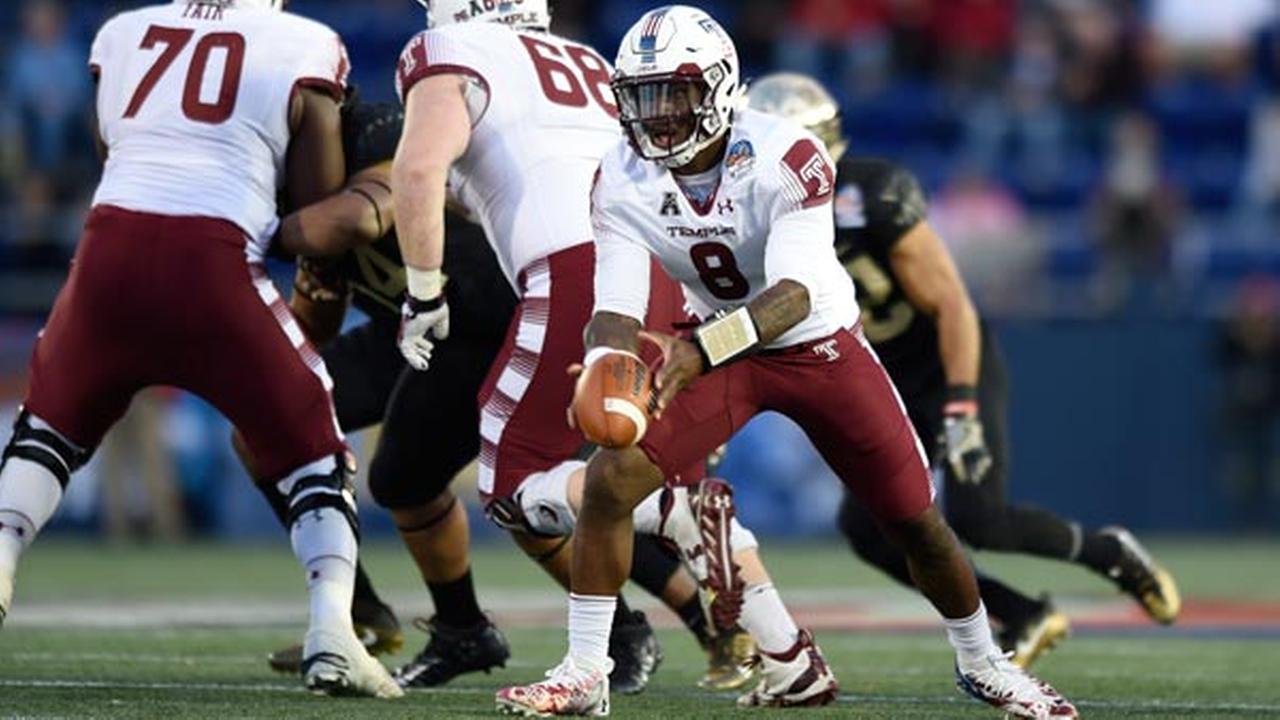 Temple fought back valiantly in the second half, but it wasn’t enough. Interim head coach Ed Foley, filling in for Matt Rhule after he departed for Baylor, definitely lit a fire under his boys at halftime.

Who wouldn’t want to play for that guy?! If only the Owls had showed more fight over those first 30 minutes.

With new head coach Geoff Collins looking on along the sidelines, Temple’s efforts of erasing a 24-point first half deficit came up short when Phillip Walker’s 4th-and-3 pass fell incomplete with less than a minute remaining and Wake Forest hung on for a 34-26 win over the Owls in the Military Bowl.

The Owls, who had surrendered just 20 points combined over their last four games, allowed the Demon Deacons to put up 31 in the first half and built a 31-7 advantage before a late Temple field goal made it 31-10 at the break. Wake Forest had averaged just 19 points per game coming in.

Walker was 28-of-49 for 396 yards with two touchdowns and an interception, Adonis Jennings hauled in seven receptions for 154 yards and both of Walkers scores and Ventell Bryant caught 11 balls for 151 yards. Temple, normally known for its vaunted rushing attack, posted -20 yards on the ground on 23 carries, -54 of those yards were due to Walker sacks.

Playing in consecutive bowl games for the first time in school history and just their sixth one ever, the Owls were unable to become the first 11-win team in program history and haven’t won a bowl game since defeating Wyoming 37-15 in the 2011 New Mexico Bowl.

Jennings’ 58-yard touchdown a capped off Temple’s first possession of the second half and a pair of Aaron Boumerhi field goals pulled the Owls within 31-23 with 9:36 remaining.

This one's not over yet. Jennings finds the end zone for a 2nd time on this 58-yard TD to pull the Owls within 31-17 @AdrianFedkiw pic.twitter.com/0j8Z6dnOhl

During that time, Delvon Randall came down with a key interception in the end zone to prevent Wake Forest from capitalizing on a promising drive down the field.

Kearns' overthrow is hauled in by Delvon Randall in the end zone for the touchback @AdrianFedkiw pic.twitter.com/vcOqung1wH

Kyle Kearns tossed the pick after being called in to take the place of John Wolford, who exited with a concussion after taking a nasty spill on his head early in the third.

Wake Forest’s play-calling became very conservative after that, calling six consecutive runs, which led to a pair of three-and-outs. The Owls had to settle for another Boumerhi field goal, this one from 38 yards, after Walker took a huge loss while trying to escape pressure in the backfield.

Walker's scrambling ability was a big asset for Temple all afternoon, but takes a huge loss here. Have to throw it away @AdrianFedkiw pic.twitter.com/Jk298FGZ6q

That ball has to be thrown away. John Armstrong took the ensuing kickoff 80 yards, which led to a Mike Weaver 30-yard field goal and a 34-26 Demon Deacons spread with 1:59 left.

Earlier, it appeared as if Temple would be the ones storming out of the gates. Sean Chandler’s interception on Wake Forest’s opening touch preceded Walker’s 48-yard score to Jennings on a perfectly-thrown ball along the right sideline.

Temple goes deep on 1st play after turnover and Phillip Walker drops it into the bucket to Adonis Jennings for the 48-yard TD @AdrianFedkiw pic.twitter.com/UzHAw7V3V4

The Demon Deacons, however, starting using an up-tempo attach which Temple had no answers for and rattled off 31 consecutive points.