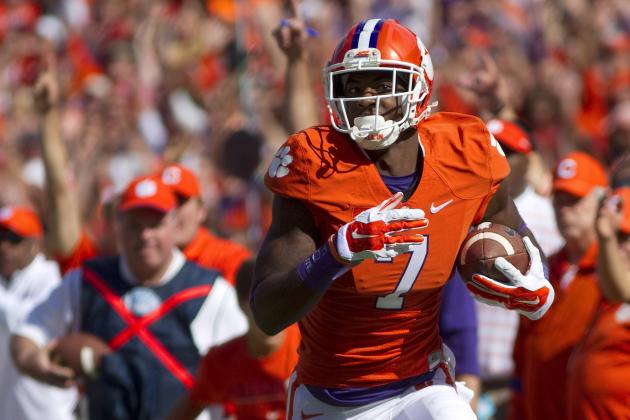 It’s no secret whatsoever that the Eagles need a talented wideout that can help surround Carson Wentz with weapons that will make his life easier and give him the ability to showcase his skills better. Luckily, the Eagles will have many options in the 2017 NFL Draft.

I put together a list of my top five wideouts the Eagles should target in the upcoming draft, plus a sleeper prospect to keep your eye on.

Williams is a monster … there is just no other way to put it. Some have even compared him to Megatron. On the season, he is up to 90 receptions for 1,267 yards and 10 touchdowns with still the National Championship to go. Williams gets open, but has been plagued by Deshaun Watson having struggles with accuracy and ball placement leading to a number of missed opportunities. However, he is known for being able to play the ball amazingly if it’s anywhere within the vicinity of his body. Williams isn’t a burner, but does have enough speed for an NFL Wideout. He has good size to make contested catches with run-after-the-catch skills. Williams does need to improve his hands as he had too many dropped passes which may turn some Eagles fans off considering what we have had to deal with. Don’t fool yourself though, Williams is a top 10 Draft talent that would immediately be our best receiver and it wouldn’t even be close.

Davis is the hot name right now in fan circles as he has been a monster all season, and showed up in his bowl game further solidifying his draft stock. Davis hauled in 97 receptions for 1,500 yards and 19 touchdowns. He has continued to impress with his route-running, hands, size, quickness, dangerous run-after-the-catch skills, and not to be minimized, his consistency. He is a polished receiver who would be a great fit in the Eagles offense. Some are even comparing Davis to Demaryius Thomas when he came out of Georgia Tech. Davis is the second rated wideout in this draft, but not by much. Also, it’s nice investing in a guy that isn’t a one year wonder. He has put up ever since arriving at Western Michigan totaling 331 receptions for 5,278 yards and 52 touchdowns. The Eagles would be lucky to snag a talent like Davis.

Ross has been a very productive wideout for Washington this season with 81 receptions for 1,150 yards and 17 touchdowns. There is one way to describe Ross: Burner. Ross will remind you a lot of former Eagles wideout, DeSean Jackson, with his shiftiness and he is also undersized. If Ross can add some weight, he could find more success and stability. Let’s be honest, large wideouts are sexy and trendy in NFL circles. Ross at worst may remind you of another Tavon Austin. Ross has good hands, route-running and is fast. He could be a mismatch nightmare, but also may be best suited as a slot receiver.

Sutton had 76 receptions for 1,246 yards and 10 touchdowns. Sutton’s tape really stands out. Sutton has size and last year he showed big play ability by averaging 17.6 yards per catch. Speed, as always, is the question with him as it is any big receivers. Sutton has a long stride and compares very similarly to Josh Doctson. Speed will more than likely not hold Sutton back, and he could be an electric playmaker in a secondary role. Maybe even more if he puts in the work.

Smith-Schuster had 70 receptions for 914 yards and 10 touchdowns. In the 2016 season opener, he had just one reception for nine yards against Alabama as he was completely shut down by Marlon Humphrey. One area of question in his game is speed and separation ability against NFL talent. He will be a true possession receiver in the NFL who gains his yards after the catch. Smith-Schuster should be a possession target who does the dirty work of the slants, digs and blocking. Because of the lack of speed, Smith-Schuster can do some things extremely well if you are looking to look past some areas he is not as strong. Also, some may hold the USC connection against him considering a certain player on the Eagles roster that currently struggles.

Etta-Tawo turned in an impressive senior season with a lot of production, totaling 94 receptions for 1,482 yards with 14 touchdowns. It was a huge jump in production over his previous three seasons at the University of Maryland where he totaled 61 receptions for 938 yards and 3 touchdowns in 3 seasons. Etta-Tawo isn’t undersized and showed some quickness. He does an excellent job making himself available in his route with strong finishing skills at the catch point, finding the ball in flight and showing natural ball skills. He really made scouts take notice this season, and that has led to him accepting an invitation to the Senior Bowl where he will get to showcase his talent against the top cover guys in the draft.

Projected Draft Position: Round 3-5 (could increase with the Senior Bowl and Workouts)