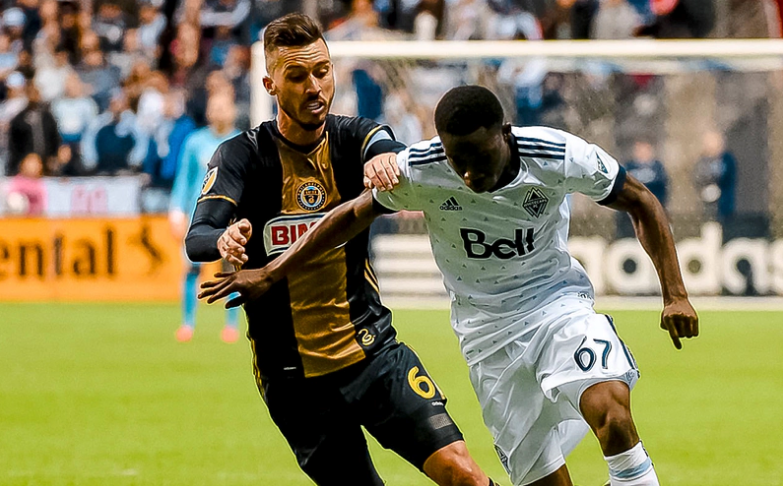 Following each Philadelphia Union match, I will be rating each Union player performance on a scale of 1-10. 1 being terrible and 10 being a perfect performance.

Andre Blake (7)
Blake has been the Union’s most consistent player since he got the starting nod prior to last season. One game into the 2017 season, that fact hasn’t changed. The Jamaican international goalkeeper wasn’t called upon to make many spectacular saves, but he commanded his penalty area confidently and came off his line to collect through balls quickly and decisively.

Keegan Rosenberry (7.5)
Rosenberry had a fine game. He was very good in the defensive third dealing with the Vancouver attack that tended to favor his side of the field from time to time and he did a nice job keeping a lid on Vancouver’s 16-year-old phenom Alphonso Davies.

He didn’t get forward too often, but sprayed a few nice crosses into the box, while his best clearance of the night came off a Jordan Harvey strike which got under Blake and surely looked like a goal, but Rosenberry was perfectly position at the right post to clear it away.

Richie Marquez (8)
I mentioned in our season preview that Marquez was the rock of the back line and possessed the speed and tackling prowess to make up for almost any mistake. He proved that on multiple occasions, looking comfortable on the ball and marshalling the backline like a seasoned international veteran.

He made several impressive tackles to cover for Oguchi Onyewu and never looked troubled by Vancouver’s attacking pace. A few more performances like this and Bruce Arena may be forced to give him a look in the future.

Oguchi Onyewu (7)
One of the biggest questions facing the 2017 Union was how Onyewu, who had previously spent his entire club career in Europe, would fare in a more physical league like MLS. He had a few bumps, but largely passed his first test.

There were a few instances where he struggled to deal with the pace of Davies and Kekuta Manneh in the Vancouver attack, and communication between him, Marquez and Blake looked like an issue early on, but he settled into the game and did quite well. His best moment came in the second half when he stepped up to put in a tackle and stopped the 16-year-old Davies in his tracks.

Fabinho (6)
Fabinho certainly has some defensive shortcomings — his pace isn’t great and is positioning leaves some to be desired — but it wasn’t an awful performance from the Brazilian. He did well getting forward down the left, but made at least two bone-headed passes which led to Vancouver counter-attacks. He’ll need to be a bit better in the coming weeks or Giliano Wijnaldum may get his starting spot.

Derrick Jones (8.5) Man of the Match
On the surface, it took some courage for head coach Jim Curtin to hand 20-year-old Jones his first start in MLS, but the homegrown product earned it in preseason and proved why he belongs on the field at Talen Energy Stadium.

Jones was all over the field, covering acres of space and putting in attack-crippling tackles. He was composed on the ball next to Haris Medunjanin and kept his passes quick and succinct to help the Union maintain possession in the crowded midfield. He looks like a star in the making and will only get better with time.

Haris Medunjanin (7)
Earnie Stewart’s replacement for Vincent Nogueira in the defensive midfield was solid if not spectacular on Sunday. The big Bosnian controlled play well in midfield and sprayed several Steven Gerrard-quality passes all over the field. He and Jones developed a nice partnership with one man going forward and one staying back to protect the back three. As mentioned in our season preview, Medunjanin seems to be a master of conservation of energy, which enables him to be effective for 90 minutes. He may not have the speed or agility of Nogueira, but the vision and passing acumen is certainly there.

Chris Pontius (7)
Chris Pontius did what Chris Pontius does, he was quiet on the left wing for much of the night and roared to life with a couple of excellent chances, including an excellent run into the Vancouver penalty area which could have result in a penalty kick on another night. Pontius isn’t the quickest, but he’s efficient in his motion and defends well; a decent night for the reigning Comeback Player of the Year.

Alejandro Bedoya (7)
Sporting the captain’s armband for the first time this season, Bedoya did a decent job of leading the attack and tracking back to help defend. He looked to good chemistry with Medunjanin and Jones, while also making some intelligent runs forward to support the attack. He carved out the best chance of the night for the Union, latching onto Fabian Herbers’ through ball early in the second half, but there is still some debate as to which position is his strongest.

Fabian Herbers (7.5)
Starting for the injured Ilsinho, Herbers had a strong night on the right flank. He’s comfortable on the ball, gets forward quickly and equally as important, he tracks back well to link play and help Rosenberry defend. It was his pinpoint through ball to Bedoya that produced the best scoring opportunity and he did quite well to deal with Davies and Manneh. Ilsinho has more on-the-ball skill than Herbers, but the young German showed poise beyond his years.

Jay Simpson (6.5)
Part of the rating isn’t all Simpson’s fault as it’s the nature of the 4-2-3-1 system that the striker gets left on an island for large portions of the game and is reliant on service from the midfield. Simpson has spent his entire club career playing on real grass, so it was an adjustment for him to play on carpet in his MLS debut. He tripped on a seam in the carpet, but made a couple nice runs and held the ball up well at times. He has the potential, but need the service to be effective.

C.J. Sapong (6)
Sapong suffered largely the same fate as Simpson, which is to say he played his part and tried to hold the ball up and build the attack, but the service was an issue and it left Sapong feeding on scraps for the 30 minutes he played. I wouldn’t be surprised if Sapong got the start against Toronto this week.

Fafa Picault (7)
In 20 minutes on the field, it’s safe to say Picault opened the eyes of many Union fans. He came on for Pontius and immediately gave the attack a different dynamic because of his speed down the left flank. His service into the box needs work, but he gave former Union and current Whitecaps right back Sheanon Williams some fits.