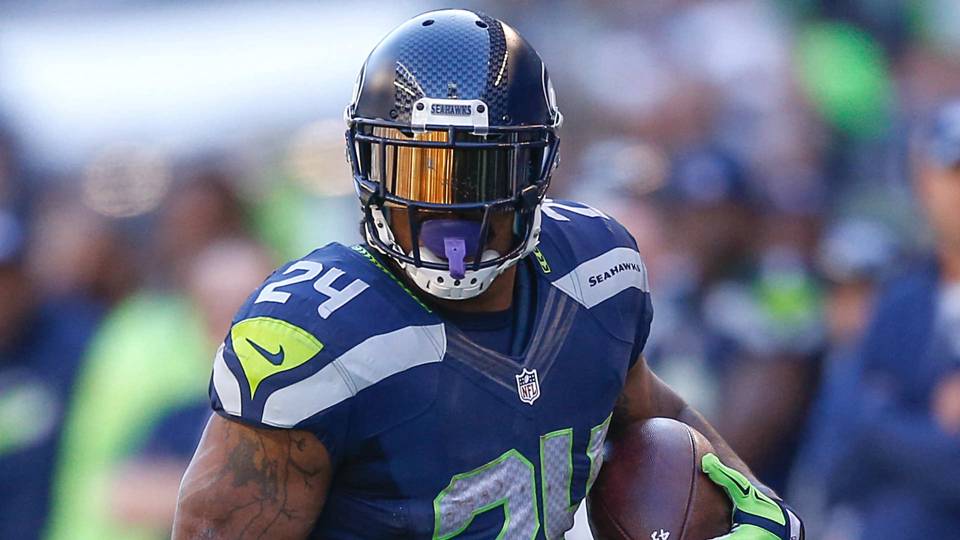 We all remember the guy who should’ve gotten the ball on the goal line and punched it in for the go-ahead score in Super Bowl XLIX. We fondly remember the gold-plated cleats and the reckless abandonment in which he ran through the tackles with his dark knight visor and long dreadlocks brushing the defensive linemen as they hoped to bring him down. And before the Big Game, we remember the guy who responded with, “I’m just here so I won’t get fined,” when asked any game related question. This guy is the incomparable Marshawn Lynch.

It’s been awhile since we’ve seen the bumps and bruises that belong to one of the NFL’s toughest players in the backfield. Lynch will turn 31 this year and last played on January 17th, 2016 in a postseason game against the Carolina Panthers. He has rushed for 9,112 yards and 74 touchdowns in nine NFL seasons and now is looking to bring his antics to the Oakland Raiders. Does he have enough left in the tank to give Derek Carr a partner to win with? Can he produce those same Seattle numbers behind one of the best O-lines in football?

Fantasy Sports Expert and Real Sports Insider Tony Cutillo uses his expertise to answer the questions of what is left for Lynch and if he will be the missing piece to take the Raiders over the top. Along with the Marshawn files, he covers a wide variety of topics that will keep all the  Fantasy Sports, Real Sports and Sports Entertainment Fans sparking up a debate.

* NFL..Richard Sherman to Trade in his Seahawk blue?….Oh how the mighty have fallen. Richard Sherman has gone straight from the Madden cover to trade rumblings in a little less than a year. Sherman is a physical CB and is being paid like one of the best. He is one of the bloodlines in the Seattle secondary which is why this trade speculation is odd. Or is it?

The facts are Sherman is 29, coming off a forgettable season and could save the Seahawks 11$ million. The NFL is a business and Seattle could use this money to revamp an offensive line that couldn’t stand up to the three little pigs if it had to. Case closed.

* MLB…Tebow Mania is still alive and well…Tim Freakin Tebow does it once again. When the Mets invited him to spring training they knew 2 things were certain: 1) He was never going to make the MLB team 2) His bat speed would have him looking like the last guy in the lineup that couldn’t hit a whiffle ball thrown by a music teacher. Were they right? Well, sorta.

He didn’t make the team and he couldn’t catch up with a major league fastball. However, in his first Single-A at bat he crushed one over the left center field fence and the people were back on board. Hurry up and get your Tebow pose ready to roll. Are you tired of this or feel it is a good story?

* Fantasy Football…Adrian Peterson to the Patriots?… Can somebody tell me how the Patriots can win the SB and still get stronger? A team that just added a new weapon in Brandin Cooks for Mr. Brady is now looking at the possibility of bringing in AP to the fold. Can it work?

If you remember in the early 2000’s the Patriots brought in a guy by the name of Corey Dillon. All he did was rush for 1635 yards and score 12 TD’s on his way to leading the Patriots to a Super Bowl. Not too bad for a 30 year old running back who was said to have nothing left. Could AP give the same results?

*NBA….1962 Vanishes under the talents of Westbrook…..Russell Westbrook continued his storybook season this week by joining Oscar Robertson as only the 2nd player in NBA history to average a triple double over the course of an entire season. Remarkably, he did in playing 10 fewer minutes per game than the Big O. Watching him play this year has been a thing of beauty and his talents cannot be underestimated any longer. It is only a matter of time before he hits his 42nd and does what all the prognosticators said he couldn’t do. Who needs KD? Is the MVP next up for his trophy case?

* PGA…..First Tiger, now Dustin……In some stunning news, Dustin Johnson withdrew from the Masters just as everyone was labeling him the front runner for the green jacket. He took a reported fall in his rental home and suffered a severe back injury. Johnson, the reigning U.S. Open champion, would have been the first player in 41 years to tee off at the Masters coming off three-straight tournament wins. His documented goal was to become the first world No. 1 to win the tournament since Tiger Woods in 2002. Now that he is out, who’s your pick to wear the green? McIlroy? Spieth?

* WWE….WrestleMania 33 was The Undertaker’s Last Ride….In a fitting end to one of wrestling’s most heralded careers, The Undertaker laid his signature trench jacket and hat in the middle of the ring signifying the end of an era that will never be replicated. No more choke slams, last ride’s, tombstones or old school rope dances. The fire has gone out, but his memories will  last forever. What was your favorite Undertaker memory?

* Creator and Reporter for fantasysportsaddiction.com

* Weekly Radio Guest on Many Live Sports and Lifestyle Networks