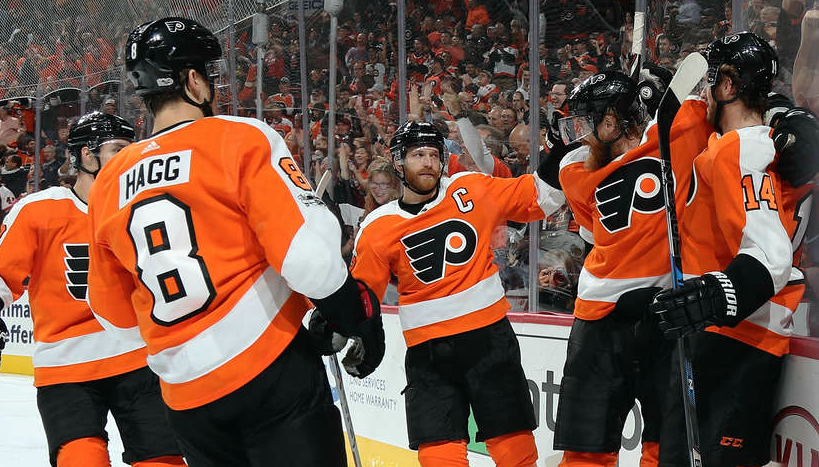 The Philadelphia Flyers head coach Dave Hakstol decided to switch things up a little bit before the start of the 2017-2018 season. The Flyers have a new top line of Claude Giroux, Sean Couturier and Jakub Voracek, and they have certainly produced to start the season.

Nine games into the season the trio has combined for 32 points, 23 of them coming at even strength. When the Flyers defied all odds and jumped up to number two in this years entry draft to get Nolan Patrick, Hakstol was tasked with juggling the lines to fit the rookie into the lineup.

What came to be is an extremely dominant top line without giving up depth in the bottom nine.

It is no secret that the Flyers have struggled at even strength the last few years, Giroux specifically who scored 31 of his 58 points on the man advantage last year.

While the season is young, Giroux has scored over 70% of his points at even strength so far this year. The key to the success is none other than Couturier who is centering this top line.

The very same Couturier, who has never scored more than 40 points in the NHL, that has nine points in nine games and has no plan to stop. All points are at even strength to boot.

Ever since the tail end of last season, Couturier has been able to turn on his offensive jets. He scored 18 points in 18 games to finish last year and continues his hot play into this early season.

It is impossible to talk about the first two without mentioning Voracek, who has 12 assists on the season, which is currently tied for second in the NHL. Seven of those assists have come at even strength, the other five on the power play. Voracek has set up his teammates time and time again and it is time for them to return the favor. Voracek deserves a goal.

I’d be hard pressed not to mention Shayne Gostisbehere. While he does not play on the top line, he currently leads the Flyers with 11 points, one goal and ten assists. Ghost has been phenomenal to start the season, lighting up the scoresheet and driving play with whoever is next to him. Ghost is showing the NHL that he can play better than he did in his phenomenal rookie season.

Nine games into the year the Flyers have impressed many fans going 5-4-0 in those games to stay around the top of the Metropolitan Division. If this new look first line continues to churn there is no guessing where the Flyers will go.