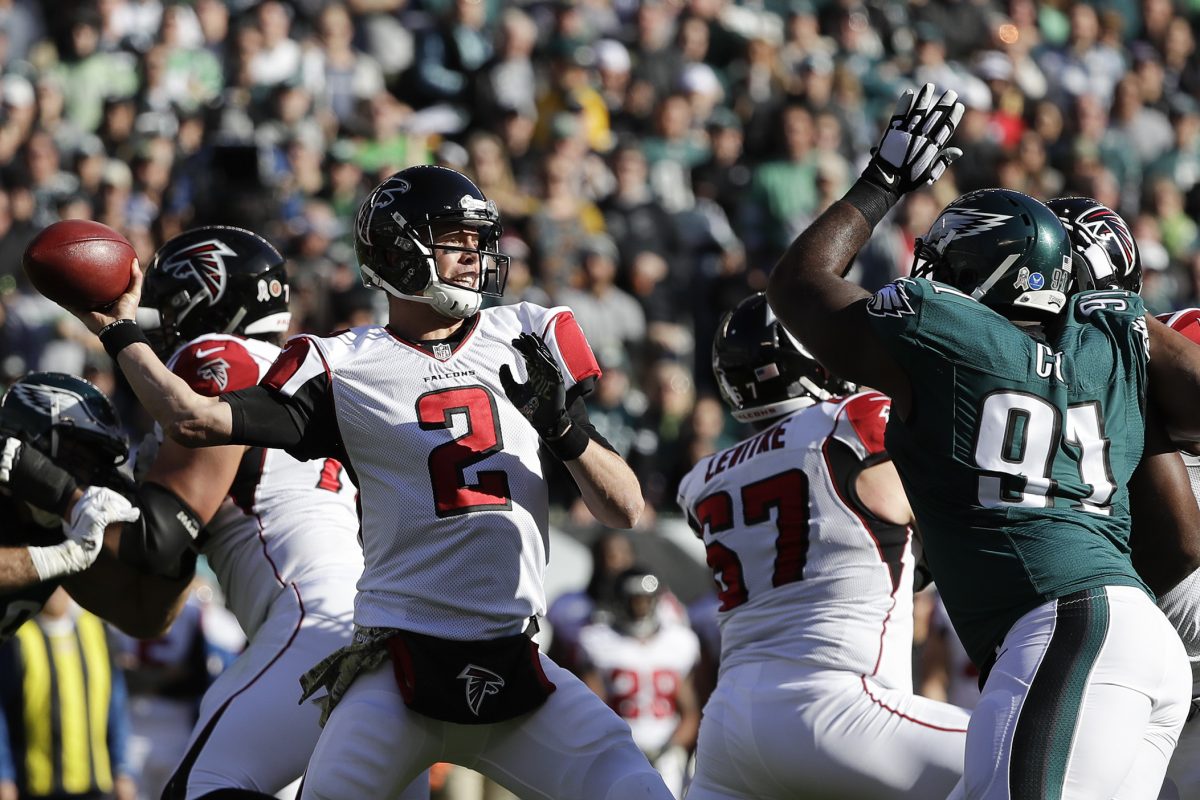 Once again the Eagles feel like they’ve been disrespected. Despite having the tied the NFL’s best record, the oddsmakers thought Philly looked so poor without Carson Wentz over the final few weeks that it has found itself in a position where it is the first No. 1 seed to be an underdog in a divisional playoff game. And it’s to a No. 6 seed no less.

What can we possibly expect from Nick Foles?

After throwing four touchdowns against the New York Giants in a Week 15 victory, Foles regressed over his final two games. He finished 19-of-38 for 163 yards with a touchdown and interception against Oakland on Christmas Night and followed that up by going just 4-of-11 for 39 yards with an interception against Dallas before departing early in the second quarter with a 9.3 quarterback rating.

Foles has been inconsistent with his accuracy and slow going through his progressions.

A few weeks ago, Eagles head coach Doug Pederson said that he wouldn’t alter the offense, that he wanted to keep things the same from Wentz to Foles. But last week, Pederson admitted that he might change a few things to cater to Foles’ strengths.

I’ve gone back and watched a lot of his tape here, [from when he was in] St. Louis, and when he was here before when I was here. I just wanted to go back and just see the types of plays. As you mentioned, the quick throw was there, a little play-action pass, the shotgun stuff. Those are all things that are in our system. We might just have to dust a few more off and get that ready to go. But that’s kind of what this week is for: to get some of those ideas and thoughts down on paper and execute them this week in practice.

We’ll see if we see any new wrinkles on Saturday. Pederson believes Foles’ demeanor is where it needs to be.

Demeanor has been great. He’s handled it great. He’s the type of guy, like most quarterbacks, we learn to compartmentalize everything and put things in boxes and just sort of check off each box every day and make sure we’re staying focused on the game plan and the guys. He’s done a nice job and handled it well this week.

The key for Pederson is to put Foles in more manageable third-down situations and for the Eagles to be successful, Foles has to do just enough to keep the defense honest so Philadelphia’s vaunted rushing attack doesn’t have to see as many eight-man boxes.

Alshon Jeffery squaring off against Desmond Trufant will be the best individual matchup on Saturday. Opposite of Jeffery, I don’t see Torrey Smith doing much of anything against Robert Alford, who may not be as talented as Trufant but is having a career year. Zach Ertz and Nelson Agholor will have an easier time getting open and they need to have big games.

Ajayi has already found success toting the rock against Atlanta. He carried the ball 26 times for 130 yards while with the Miami Dolphins in their 20-17 victory. Ajayi wasn’t on the Eagles last season, but the Birds totaled 208 yards on the ground on 38 rushes in a 24-15 win over Atlanta last season. In that game, the Eagles used extra tackles and tight ends on the line of scrimmage to combat some of the eight-man boxes. They also used a lot of counter and mis-direction to counter the aggressiveness and youth of rookie linebackers Deion Jones and DeVondre Campbell. The Eagles held the ball for over 38 minutes and kept the potent Atlanta attack off the field.

The Falcons, however, have gotten much better defensively since the meeting between the teams and even since Ajayi’s performance in Week 6. Pederson described whether any of Ajayi’s success was helpful for the preparation.

It’s helpful from the standpoint of the success that he had and to be able to look at the types of runs that he had that game. As we know, listen, it’s different circumstances and all that, but there wasn’t a lot of like different concepts and that they ran that we’re doing now, type thing. A lot of it was similar.

Philadelphia’s offensive line needs to dominate this game and allow Ajayi to slam away on first and second down to set up Foles with easier third down situations.

The Falcons led the NFL last season with 540 points scored, but that number has dipped all the way down to 353 and a No. 17 ranking in 2017. Atlanta moves the ball, it is third in yards per drive, and converts third downs, it is second, but the huge dropoff has come in the red zone where the Dirty Birds finished 23rd in the NFL with a 50 percent touchdown rate. Matt Bryant has kicked nine field goals in two weeks due to inept red zone play.

Matt Ryan tossed 38 touchdowns during his MVP campaign last year, but threw only 20 this season, with only three of them going to Julio Jones.

Jones is going to get his, he’ll probably have over 100 yards. The key is going to be to not let him find paydirt. The defensive line is going to dictate if Jones goes off, because Atlanta likes to take deep shots with Jones off play-action, whether it’s a go-route, post or deep cross over the middle of the field. If Fletcher Cox, Brandon Graham, Timmy Jernigan, Chris Long, Derek Barnett and company can pressure Ryan consistently, it’ll disrupt the timing between the two or not even let the route materialize because the heat is already in Ryan’s face.

Eagles defensive coordinator Jim Schwartz was asked what the team needs to do to limit Jones.

So I think you have to look at it that way and say, how do you stop their offense, how do you minimize their scoring, and not just concentrate on one player, because like I said before, they do have other players that are threats. [Falcons WR Mohamed] Sanu has been a consistently good player for a long period of time. Their tight ends really developed. Both backs can catch the ball out of the backfield. Pro Bowl quarterback. It’s not just a one-man team.

Where the Falcons can be exploited is along the interior of their offensive line. They suffered a key injury to it with Andy LeVitre’s injury, leaving Ben Garland as the starter at left guard. Right guard Wes Schweitzer was a sixth-rounder last year and struggled against Aaron Donald last week. Alex Mack is an outstanding center and will probably be helping out Schweitzer on Cox, leaving Jernigan free one-on-one against the outmatched Garland.

Schwartz has been bringing more blitzes on third down and lining Graham up as a defensive tackle. If he gets Garland on an island, uh oh!

Schwartz brings the heat on 3rd down again, Graham in as a DT again and Robinson gets the pick! pic.twitter.com/pqF2ATcyIf

Getting the Falcons off the field on third down will be vital as well. Atlanta, which ranked second in third down conversion rate, was just 2-of-11 against the Birds last year in that 24-15 loss. If the defense can force a couple three-and-outs, that obviously gives the offense better field position and puts them in a spot where only a few first downs can put you in field goal range.

Despite a recent slide against the run to close the regular season, Philadelphia still remained the best in the league against it. The Eagles have also always fared well against zone blocking schemes, although the quick and shifty DeVonta Freeman will present a challenge. Tevin Coleman is no slouch either. Philadelphia will have to be disciplined and gap sound, Freeman is an outstanding cutback runner.

It’s a game of inches.

And it’s only a couple inches that Devonta Freeman needs to find a crease to #EatFree?.

Where the Eagles really had trouble the last month has been covering tight ends and running backs, a direct result of Jordan Hicks’ injury. Freeman is adept at coming out of the backfield and shows patience in the screen game. The Birds will have their hands full with him and Coleman in the receiving game.

I’m a lot more impressed with the Falcons’ defense than I am with their offense at the moment. They’ve had 12 scoring series in their last two games, but nine of them have been Matt Bryant field goals. Julio Jones is a scary toy in Atlanta’s arsenal, however, I think the Eagles’ defensive line can control the game. The Falcons like to use Jones in their intermediate to deep passing game, but the guards of the Falcons are a big mismatch to Cox and Jernigan, not to mention Graham sliding in to play defensive tackle on third down. The Falcons’ defense is sound, but they do allow 4.1 yards per carry on the ground and I think this is the game where the Ajayi trade really pays off. Atlanta kicks four more field goals, but doesn’t find the end zone. I’ve got the Eagles in a slugfest.