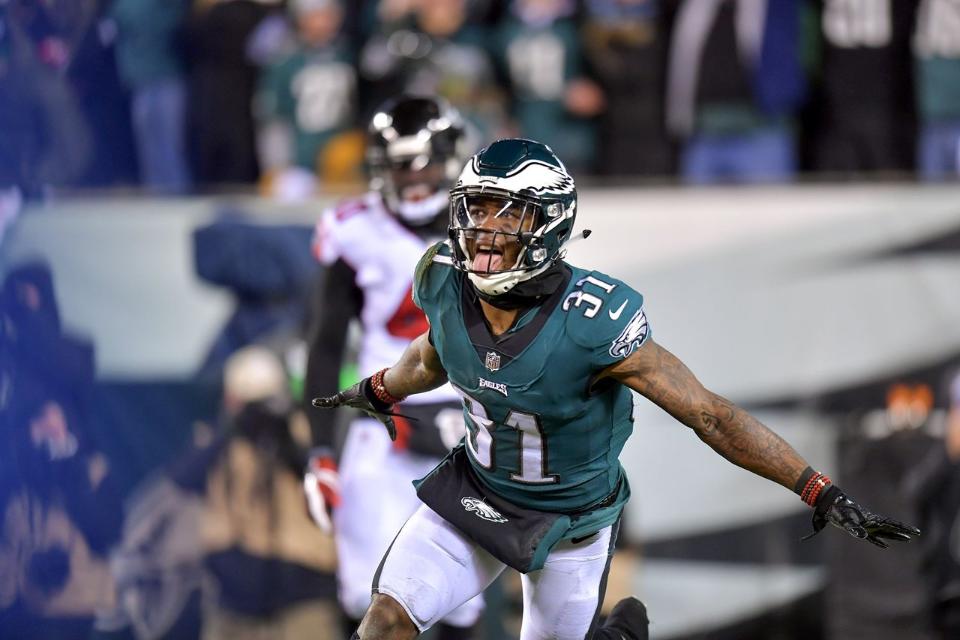 It was a fitting conclusion.

With their backs against the wall coming in and Las Vegas making the Philadelphia Eagles the first No. 1 seed underdog in Divisional Round history, the defense found themselves with their backs against the goal line in the final minutes of the fourth quarter. When Matt Ryan sprinted out of the pocket on 4th-and-2 and his pass to Julio Jones fell harmlessly incomplete, the 70,000 plus at Lincoln Financial Field suddenly went from overwhelming angst to complete jubilation.

We all we got.

We all we need.

Philadelphia’s goal-line stand with 58 seconds left helped it stave off the Falcons, sending the Eagles to the NFC Championship Game with a 15-10 win over Atlanta.

The Falcons regained possession with 6:02 left after Jake Elliott nailed a chip-shot field goal to put Philly up five. Then Atlanta began to methodically move the ball down the field and converted a key 4th-and-6 when Malcolm Jenkins was matched up on Jones in the slot and beaten on a deep crossing route for a gain of 20 to put the ball at the Eagles’ 38-yard line.

Jenkins got matched up against Jones and he goes for 21 yards on 4th+6 pic.twitter.com/EnOCYSntAL

An eventual 12-yard reception and 10-yard run by Tevin Coleman set up the Falcons with a 1st-and-goal at the 9-yard line. Ronald Darby blanketed a fade attempt to Jones on first down, Ryan’s underhanded shovel pass to Terron Ward was incomplete and Jones picked up seven on a 3rd-down quick slant. But then he slipped on fourth down and had no chance to make a miraculous catch to save the defending NFC Champions’ season.

What an amazing goal-line stand, Eagles are going to the NFC Championship!!! pic.twitter.com/tNkNLVCTqE

Philadelphia controlled the second half of this game. In its four second half possessions, the Eagles used two of them to go on long extended drives. Although both ended in field goals, Philly took 5:42 off the clock on one to go 74 yards in 12 plays and drained another 7:57 off to march 80 yards in 14 plays. These methodical possessions allowed the defense to stay fresh and blank Atlanta in the second half.

Nick Foles finished 23-of-30 for 246 yards. He had a shaky first half, throwing up a duck on the first play of the game, which drew a pass interference. He also missed an open Zack Ertz in the flat and overthrew an open Trey Burton, but Foles picked it up in the second. Doug Pederson called a lot more run-pass options in this game, which allowed Foles to make more decisive decisions with the ball and he was getting out of his hands a lot quicker. He looked a lot more confident than a few weeks ago, when he was asked to go through his progressions more.

Another completion to Jeffery, this one moves the sticks on 3rd+8. Good job of moving in the pocket. pic.twitter.com/8ma5sGTydK

Pederson attempted to establish a ground game despite consistent eight-man boxes and the Birds churned out 96 yards on 32 carries. Jay Ajayi toted the rock 15 times for 54 yards and also added 44 yards on three catches, including a 32-yard screen with Jason Kelce and Stefen Wisniewski leading the way.

Kelce and Wiz lead the way for Ajayi on the screen and he picks up 32 yards on 3rd+7 pic.twitter.com/uMOhErgL4b

Atlanta had a chance to create some cushion between itself and the Eagles if it would’ve executed better near the end of the first half. The Falcons were up 10-6 with just over two minutes left in the opening half and would receiver the kickoff the start the second. Instead the Eagles forced a punt late in the half and a three-and-out to begin the third quarter. Then the Eagles caught a break with Torrey Smith gaining 20 yards when a Foles pass ricocheted off the knee of Keanu Neal attempting to intercept an errant pass. Foles fired a 15-yard completion to Alshon Jeffery with a tick on the clock and Elliott’s 53-yarder whittled the deficit to 10-9 heading into the break.

Foles gets hit as he throws, Keanu Neal muffs the interception and Torrey Smith hauls in this 20-yard reception after it bounces off his knee. Then Foles hits Jeffery along the sideline for 15 yards, leaving 1 second on the clock for Elliott from 53 yards! pic.twitter.com/QqjRMN9trf

The RPOs got Foles in a rhythm in the third. He completed a trio of tosses to Jeffery on Philly’s first scoring drive of the second half.

RPOs allowing Foles to be more decisive when throwing the ball and a couple solid completions to Jeffery pic.twitter.com/hJehNF1Fek

Matt Ryan was 22-of-36 for 210 yards and a touchdown, while Jones hauled in nine receptions for 101 yards. Despite going over 100, I thought Darby and Mills were solid when matching up against him. The defensive line also disrupted Ryan enough to make him move around in the pocket and disrupt the timing between he and his wideouts. The quick and shifty DeVonta Freeman was limited to seven yards on 10 rushes, but Tevin Coleman picked up some of the slack with 79 yards on 10 carries. The Eagles consistently set the edges in run defense whenever Atlanta tried to run its stretch plays. Brandon Graham was instrumental in the Eagles’ success.

Graham slices into the backfield immediately and stuffs Freeman for a loss of 5 pic.twitter.com/WzWG3IQGDF

Atlanta came in second in the NFL in third down conversion, but the Eagles held them to 4-of-13 on that money down. Philadelphia, meanwhile, was 6-of-13.

Philadelphia will play the winner of Minnesota/New Orleans and host the NFC Championship Game next Sunday.