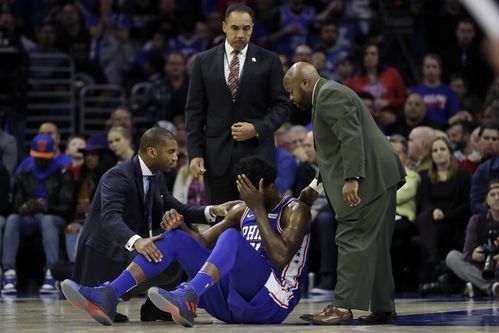 Philadelphia 76ers center Joel Embiid exited Wednesday night’s game against the New York Knicks with a facial contusion following a nasty collision with teammate Markelle Fultz. The team ruled that he passed his concussion protocol testing, but did go to the hospital for further examination.

The injury occurred in the second quarter.

Here is the play where it happened. pic.twitter.com/LoP8wWl4C6

Embiid took to social media later in the night and simply posted “not good” on his Instagram story.

Joel Embiid just posted this to Instagram story from hospital

Don’t scare us like that Joel! Preliminary X-rays revealed no fractures, but if the injury is worse than initially indicated, maybe Embiid will have to come back wearing a mask.

As for the game against the Knicks, Dario Saric stepped up in Embiid’s absence, delivering 26 points, 14 rebounds and five assists for a 118-101 victory. The play of the game came late in the first half when Saric hustled for a loose ball, dove and batted it ahead to an open Ben Simmons for an emphatic dunk. Saric let out a euphoric roar following the play.

Not sure what's better, Dario Saric's hustle or celebration on this play pic.twitter.com/zvolTxQanT

The Sixers have won eight straight and own the No. 4 seed in the Eastern Conference.