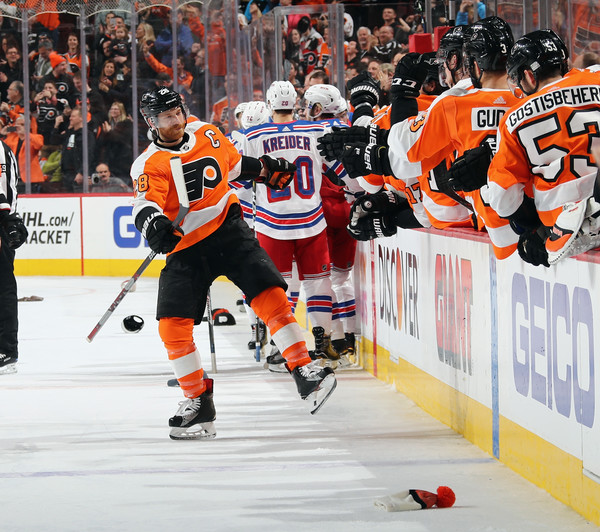 The Flyers had a simple task going into Saturday’s game against the New York Rangers: win and you’re in. For the second time in eight years, the Orange and Black beat the Rangers in game 82 to punch their ticket to the Stanley Cup Playoffs.

The Flyers scored five times, three by Captain Claude Giroux (good for his first regular season hat trick), en route to a shut out win over the Rangers. Brian Elliott looked sharp in net, stopping all 17 shots he faced, and looks ready to roll for the postseason.

Playoff hockey is back in Philadelphia after a one-year hiatus and I couldn’t be happier. I like the way the roster looks going into the 2018 playoffs. They are anchored by a core that’s been there before: guys like Claude Giroux, Jake Voracek, Wayne Simmonds, and Sean Couturier have postseason experience and can be mentors to the younger, future core. Guys like Travis Konecny, Ivan Provorov, Nolan Patrick, and Oskar Lindblom will gain valuable experience that will help further their development into future stars of the league.

I’m excited to see what Claude Giroux will do in the playoffs after he put the exclamation point on a Hart Trophy campaign, 102 points, the most by any player on a playoff team. I can’t wait to see what the young guys do in their first series. There is talent up and down this roster and they are clicking at the right time, 6-1-3 in their last ten games, including two huge wins to clinch a playoff berth. There is a lot to like about this team moving forward. The only thing that is worrisome is where they finished in the standings.

Due to losses by the Devils and Blue Jackets, the Orange and Black found themselves in the three spot in the Metro, giving them the matchup against the Pittsburgh Penguins. Earlier this week I mentioned that this wasn’t the ideal landing spot. Now that I saw how the Flyers ended the season: BRING ME THOSE FLIGHTLESS BIRDS!

The battle of PA is ON. https://t.co/9wDoj8Ngww

I’m ready to party like it’s 2012. Claude Giroux will outplay Sidney Crosby, again. Sean Couturier is going to shut down Evegni Malkin, again. Despite being 0-4 on the season against the Penguins, I like the Flyers odds in the playoffs. There’s nothing in the world like playoff hockey, every team in the postseason has a fighting chance. I’m ready to see the Flyers derail the Pittsburgh hype-train. 2018 is the year of the dog and that’s suited our city well so far.

Make sure to follow Phillyinfluencer.com for more updates on the schedule for the Flyers playoff series against the Penguins.