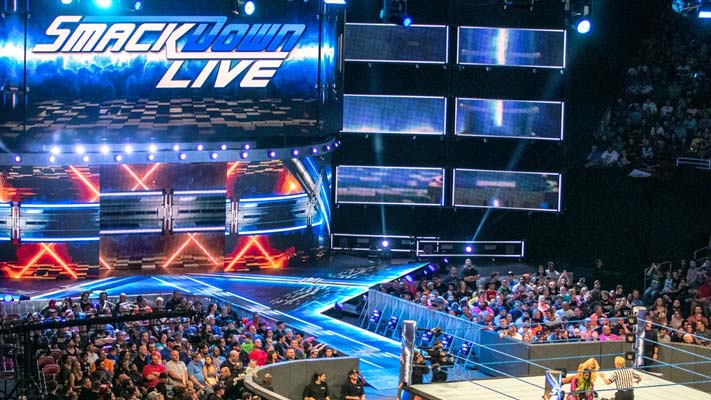 With WWE’s television rights currently being negotiated, it was reported last week by Hollywood Reporter WWE’s second fiddle, also known as SmackDown Live, was being shopped to a different network than USA. NBCUniversal, which was reported to have tripled their current deal with WWE to keep RAW, was going to let WWE scope out other possible destinations for SmackDown.

And now, according to ESPN’s Darren Rovell, Fox has agreed to a deal with WWE “in principle” to televise SmackDown when the program is eligible to switch networks in October 2019.

ESPN was also rumored to be interested in acquiring WWE programming, but with their newly announced deal with UFC just a few short weeks ago, it looked like that was all but over. And now it seems like WWE’s found a new programming partner.

Fox has also canceled various television series within the last few weeks, spiking rumors that a WWE deal was on the way. The Wrap also reports that SmackDown Live will return to Friday nights, where it aired from 2005-2015 on various networks. The site also reports SmackDown will broadcast on Fox, not FS1 or FX.

Live television has always been a commodity for the big networks. With current television shows being available on almost every on-demand platform, it makes sense for networks to bid high on live content, even if it is the sports entertainment brand.

Averaging 2.59 million viewers, SmackDown Live has about a 0.40 difference in the average for RAW.

This also needs to be said: there is nothing that has officially been confirmed by NBCUniversal or WWE that Monday Night RAW will remain on USA. In fact, there’s probably still ongoing discussions regarding that deal. NBCUniversal’s exclusive negotiating window is closing soon and they’re likely going to do everything they can to keep WWE.

But if WWE can get more money for RAW from another network… why wouldn’t they?

UPDATE: The Hollywood Reporter is reporting WWE’s deal with Fox is worth in excess of $1 billion over five years.

Fox will be the anticipated home of WWE SmackDown Live in a massive new five-year deal worth more than $1 billion, sources close to the negotiations tell The Hollywood Reporter. The new deal, which is nearing completion and is worth $205 million annually, is expected to begin in October 2019, and will mark a three-fold increase over what NBCUniversal is currently paying WWE to air SmackDown on its USA network.

WWE is said to have had an even higher bid from a third party – and enthusiastic interest overall. But WWE executives are said to have embraced Fox’s commitment to heavily promote SmackDown across a robust sports portfolio that includes the NFL and Major League Baseball.

The deal would split WWE programming rights with NBC, which is expected to retain Raw. Smack[sic] is averaging 2.59 million viewers a week so far this year, while Raw is pulling about 3 million. Both programs currently air on USA. And the WWE had a significant part in the network’s May 14 upfront presentation to advertisers with Stephanie McMahon, WWE’s chief brand officer, introducing several female wrestlers including former UFC star Rhonda Rousey.

You can follow Nick Piccone on Twitter (@nickpiccone) and Instagram (@picconenick), and e-mail him at [email protected]lyinfluencer.com. Subscribe to The Straight Shooters Podcast (@ShootersRadio) on iTunes here and listen every Friday afternoon at 2:00 P.M. on Wildfire Radio. Click here to read his pro wrestling articles on PhillyVoice.