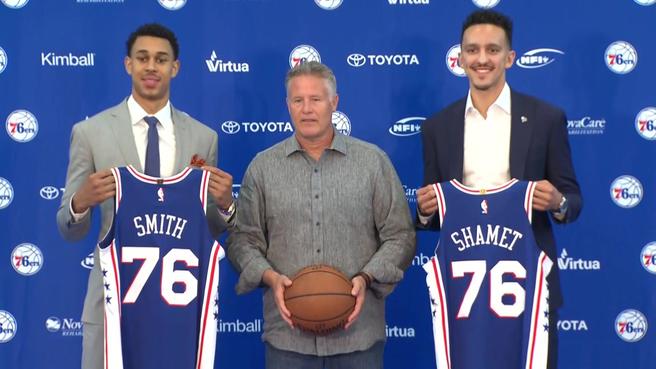 The 76ers completed a draft day trade with the Suns that brought Zhaire Smith to town along with Miami’s unprotected 2021 first-round pick. We will be able to evaluate Smith as a player beginning in a couple of weeks during the Las Vegas Summer League, but barring a blockbuster trade for a Kawhi Leonard-sized talent, it will take longer to evaluate the value of the first-round pick also received in the trade.

Before we dive into the value of this particular pick, one thing teams prefer about picks when they are traded is when its conversion is known – there are no protections associated with it. This means that while we don’t know where this pick will land in the 2021 draft, we are 100% certain the pick is under our control that year. The Sixers or whichever team acquires the pick will know they have another draft asset to use or trade that is available in 2021, and that certainty has added value than it if it had protections of any kind on it.

For a recent comparison, the pick the Sixers used to select Mikal Bridges that put this trade in motion was the Lakers’ first-rounder that finally converted from the Michael Carter-Williams trade three years ago. When that trade was made, we received a protected first-round pick (1-10 in 2015, 1-5 in 2016, 1-3 in 2017 and then completely unprotected* in 2018). Even more recently, the Sixers moved up in the 2017 draft from third (originally 5th, thank you PICK SWAP!) to first overall by packaging this 2018 Lakers pick if it fell between second and fifth overall or, if not, the 2019 Sacramento Kings’ first-round pick [unless that pick is first overall – yes, the Sixers keep the Kings pick next season if it’s first overall.] The uncertainty of which year those picks will convert didn’t mean they were worthless, but knowing this particular pick Brett Brown got in 2021 will be ours with certainty is added value in comparison to being unsure.

What is uncertain is where Miami will be slotted in 2021. Of course a lot may and will change over the next three years. but we’re talking about how this pick’s value is today. Looking at the Miami roster now, going into the 2020-21 season they will finally be out from under Hassan Whiteside’s max contract of $27 million and the $38 million combined (!!!) for Goran Dragić and Tyler Johnson. They are an aging expensive team who appear to be doomed to the cycle of mediocrity over the next few seasons, but who knows. Miami will always be a destination because of the city and lack of state income tax, but top players want to win first and foremost, and Miami is not winning anytime soon. I’m going with the positive assumption here and say the Heat will not make the playoffs in 2020-21 and this will be a lottery pick.

This is notable because starting with the 2019 NBA Draft Lottery, the lottery odds are being “flattened” in an effort to minimize tanking (it won’t). Feel free to take a look at how the lottery odds work here. Basically what the flattening of lottery odds means is, that starting in 2019, it’s going to be harder for the worst teams in the league to get rewarded with the top picks in the draft, and easier for teams towards the back of the lottery to move up and receive a top pick. Under the new system being installed starting next season, the 2019 10th overall pick will have a 14% chance to jump into the top four, as opposed to the 4% chance the Sixers had into jumping from 10th into the top three picks they had in 2018. In summary, while there is no guarantee that a team will move up in the draft and jump teams that had worse records, the odds that will happen will be increased substantially over the current system.

But what if the 2020-21 Miami Heat DO qualify for the playoffs and are not in the lottery in May of 2021? Unlike many of my friends on Twitter and Facebook who can project exactly what the future will hold, I cannot. So again, I cannot predict where Miami will finish record-wise in 2021. What’s interesting about this particular year however is that there is substantial support for eliminating the “one-and-done” rule the NBA currently has, opening up the possibility that high school seniors can enter the NBA Draft, which in turn increases the available talent. While there is NO guarantee this will happen, 2021 is the year that is being discussed and is the earliest possible year this change can happen which is starting to be referred to as a “double draft” since the top talents from 2 separate drafts under the current format would be available at once.

While this is no indication of future talent and every year is different and past performances do not guarantee future results, etc etc, just for this exercise let’s look at the last two NBA drafts of the lottery picks, 1st through 14th alone: 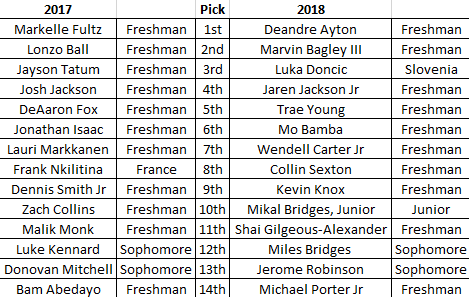 With all disclaimers aside regarding talent evaluation, if the elimination of the “one-and-done” rule actually happened in 2017, there are 14  prospects drafted in 2018 that would have been available in 2017. Certainly not all of those prospects would have declared for the draft, but you can be sure Deandre Ayton, Michael Porter Jr, Marvin Bagley II, Wendell Carter Jr, Collin Sexton, etc. would have. College players such as Mikal Bridges and Jerome Robinson probably wouldn’t have. We could argue exactly where Michael Porter Jr. or Marvin Bagley III would have gone if they could have been drafted in 2017, but the point is clear in that there would have been more available top talent, thus the idea of a “double draft”

It’s nearly impossible to predict exactly how valuable a future pick will be in any given year due to so many unknowns. What makes this 2021 Miami first-round pick valuable is that there are no protections on it, so the year it conveys is known and if it falls as a lottery pick (Whiteside sucks), the odds that it becomes a top pick are higher than they would have been in previous years. Throw in the possibility of eliminating the “one-and-done” rule beginning in 2021, this particular pick can be seen as more valuable than other first-round picks that have been traded in previous years. It is important to take into account the value of this pick when evaluating whether you like the Sixers’ draft daytrade or not, but perhaps even more importantly, it is important  what other franchise front offices consider the value of this pick if it happens to be included in a trade for top talent.