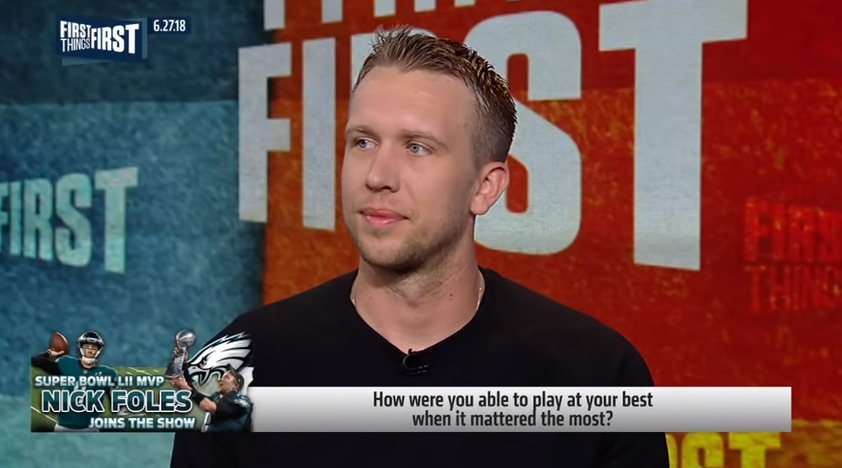 The Super Bowl LII MVP has been making the media rounds the last few days promoting his new book, “Believe It: My Journey of Success, Failure, and Overcoming the Odds”, but it was his appearance this morning on FS1’s First Things First that may have struck me the most.

Once the NFL off-season began, so many pundits and fans thought Nick Foles would be actively searching for a new team and wouldn’t play another down for the Philadelphia Eagles. As much as this Eagles team has preached being great teammates with each other, nobody could think about Foles taking a backseat to Carson Wentz this coming season after the end-of-season run he’d just had, capped off by a Super Bowl MVP Award.

And regardless of what Foles said, everybody believed he’d be gone. “Why wouldn’t he want to start for a team!?” many people questioned. And he does. But there clearly wasn’t a fit elsewhere for him and the Eagles, so Howie Roseman and co. rewarded Foles with a new contract. It may be the NFL’s best insurance policy.

On television this morning, Foles talked about backing up Wentz and how important his relationship is with the starting quarterback.

“I think it’s a great dynamic. I think it’s a great example to younger quarterbacks. In high school, you’re always trying to cut each other in drills. You’re always trying to outdo each other. And it becomes sort of a toxic environment. And it’s not fun. And I’ve always been a relational guy … I want to have fun, I want to push each other. We’re all players. But at the end of the day, we’re on the same team. We have to support one another.

“Carson’s a tremendous player. He’s going to be a great player in this league for a long time. And I think just having those open discussions in the locker room, starting with your friendship first, and then you know, you’re teammates, and genuinely caring for one another. That means, when he’s out there, he knows I’m not vying for him to get hurt or something. I want him to succeed. I want him to stay healthy the entire season. I want him to have a great career even at the expense of not playing. That’s where I got to put my ego aside and say, ‘Hey, this is what’s best for a team.’ I can still be a leader in the locker room, but just in my lane.”

He went on to say he wants Wentz to become a legend in Philly. And then, “We’ll see what happens after that.” I love this dude. I’m not sure there’s been a pro athlete in this city that’s gotten it more than Foles. Maybe Brian Dawkins.

Watch the entire segment below: