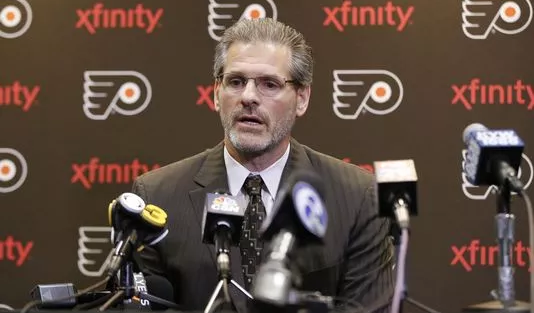 The NHL Draft is less than one week away and the Philadelphia Flyers currently have two picks within the top 20.

This could be a huge make-or-break draft for the future of this franchise and its general manager, Ron Hextall.

At last year’s draft, Hextall traded Brayden Schenn for two first-round picks and Jori Lehtera, and I would expect that he would look into a similar trade at this year’s draft as well.

The Flyers trade Wayne Simmonds and a 2018 fifth-rounder to the Chicago Blackhawks for the eighth overall pick this year, their 2019 first-round pick and the contract of Marian Hossa.

This would give the Flyers three first-round picks in the top 20, open up a spot for a young player like Morgan Frost and gives the Blackhawks some much-needed cap space during the off-season. The Flyers can put Hossa on long-term injured reserve during the season. In addition, if the cap does go to $80 million, the Flyers would have $22 million in space before making any moves.

Having picks 8, 14, and 19 would put the Flyers in a position to do multiple things. They could grab a high-end prospect at 8 and possibly trade 14 or 19 in order to grab a much-needed goal scorer like Jeff Skinner or Mike Hoffman.

Prospects available for this hypothetical eighth pick could be Oliver Whalstrom (center/winger), Joseph Veleno (center), and Brady Tkachuk (winger). All of these guys would be a great addition to the Flyers and may be able to step into a role right away.

While the Flyers have a great young core of Nolan Patrick, Travis Konecny, Ivan Provorov, Travis Sanheim and others, older players like Jakub Voracek and Claude Giroux make the Flyers’ window closer than Hextall may be willing to admit.

If given the opportunity, Hextall should look to trade Simmonds for a younger version and making a trade like the one above would put the Flyers in a great position not only for now, but for the future as well.

What will most likely happen:

Hextall will make a pick at 14 and trade back from 19 into the later part of the first round, building assets for the draft’s later rounds. This has been Hextall’s style usually as Flyers general manager, and he’s made a trade in each of the last three first rounds.

Some prospects available at 14 and 19 that would fit the Flyers’ mold would be Isac Lundestrom (center), Joel Farabee (winger), Rasmus Sandin (defense), and Rasmus Kupari (center). All of these players have great speed and high hockey IQ and with some seasoning will make great additions to the Flyers roster.

This draft is shaping up to be a good one, after Rasmus Dahlin and Andrei Svechnikov, 3-10 is expected to be up in the air and if the Flyers can trade up in there to get their guy I think they’ll do it.