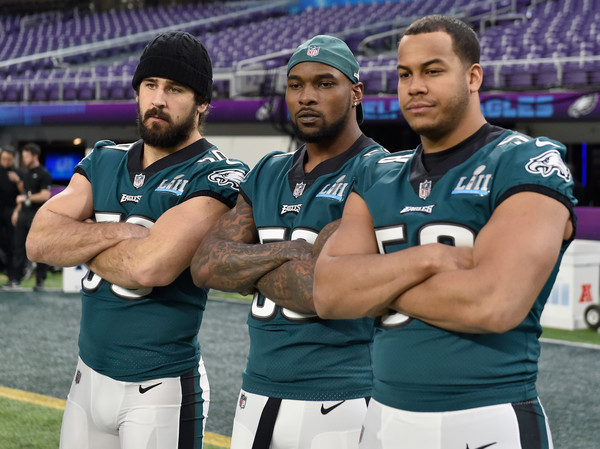 The Philadelphia Eagles’ biggest priority heading into the offseason was bringing Nigel Bradham back.

Bradham agreed to a five-year, $40 million extension with $14 million guaranteed for the Birds. The underrated linebacker excels in defensive coordinator Jim Schwartz’s scheme due to his ability to cover. Schwartz prefers to rush with four and drop back seven, meaning you better have some backers that can cover and play zone.

Bend but don't break, Bradham has been an unsung hero so far, Eagles get 8, Panthers settle for 3 pic.twitter.com/UQka3dqVXf

Bradham was suspended for the season opener against Atlanta due to a July 2016 incident at a hotel. He took to Twitter to apologize about it in late June.

I would like to apologize to my fans, coaches, teammates and the entire eagles organization for the 1 game suspension.This stems from a July 2016 incident and the matter is now resolved.I look forward to giving it my all this season and helping the team win another Championship

The surprise of the offseason came when Mychal Kendricks was released. The 2012 second-rounder Kendricks, who signed a four-year, $29 million extension in 2015, was released with a post June-1 designation. This meant that the Birds saved $6 million of Kendricks’ $7.6 million figure in salary cap space instead of $4.4 million had he been cut before June 1st.

It’s not like the Eagles didn’t try to work out a trade for the 28-year-old linebacker. According to NFL insider and Sirius XM host Adam Caplan, his base salary was too steep for an NFL franchise to part ways with an asset.

#Eagles tried to move Kendricks, but no takers with a $5 85m base salary. My understanding is he would not consider a paycut. Had 2 seasons left on his deal.

Kendricks’ departure does hurt the Eagles’ depth, especially if Jordan Hicks gets hurt again, but considering their base defense is nickel and two linebackers are preferred instead of three most of the time, it’s not a substantial loss. And that takes into account that Paul Worrilow tore his ACL during the first day of OTAs Tuesday.

Big 1st half for Kendricks, the preseason success has translated into the regular season pic.twitter.com/WZ1oRxGofj

The Mike and Sam linebackers will be filled by Hicks and Nigel Bradham, with Corey Nelson, Kamu Grugier-Hill, Nate Gerry and Joe Walker battling it out as Kendricks’ replacement at Will linebacker. Let’s also remember that Malcolm Jenkins will be on the field as another linebacker when the Birds go to their three-safety looks.

Schwartz explained what the plan would be regarding the weakside linebacker position during OTAs.

The plan is to just have competition and see what comes of it. This time of the year you’re certainly open minded for all positions. We communicate that to our team. Whether it’s a player that’s a rookie, whether it’s a veteran, we have some guys that — we have a lot of guys come from different points. We have some young players that have worked up in our system. We have some guys that we brought from other teams and we have some new players on the roster. We’ll shake it all out, and when we get to the end of training camp, we’ll try to go forward with the best plan that we have.

Schwartz was asked if Nelson would get the first look and he refrained from getting specific with an answer.

I don’t know that you could consider anybody really getting a first look this time of year. Our reps actually are sort of geared more toward younger players as opposed to veteran players. A lot of our developmental groups get more reps this time of year than the quote, first group, which we really don’t have at this time. We don’t have depth chart. We’re just trying to roll guys through. Get guys experience. Guys are coming from different things. We have some young linebackers that are learning to play multiple positions. We talked a lot about that last year, being a key factor in our ability to overcome some injuries. Guys that could double dip and play Mike, Sam, Will, nickel, dime, and all those different things. So some of our players that have been here are working on that. Some of our young players are focusing on one position. New guys are trying to pick up the scheme and sort of trying to find their place.

One thing is that nobody is earning any starting jobs now. Now’s the time for individual improvement. Now’s the time to start talking about some scheme stuff and get some change or anticipate some changes. Really just to set the table for training camp. Training camp is when the competition will get fierce and the pads will come on and things like that. The only people that anyone’s competing against right now is themselves.

I still believe Nelson is the guy to watch out for this summer. He’s at his best in coverage and dealing with running backs coming out of the backfield. His weaknesses will be minimized due to the scheme. Nelson isn’t comfortable coming downhill and taking on blocks in the running game, which is what he did as a 3-4 inside linebacker in Denver. I expect Nelson to be the third-down coverage linebacker and play the 40 percent or so snaps that Kendricks received last year.

Kendricks isn’t as productive in coverage, a key component in Schwartz’s defense, especially zone. That weakness was on display when he began to play 80-90 percent of the time every week in Hicks’ absence. Schwartz’s scheme also doesn’t ask his linebackers to blitz much. In the Super Bowl against New England, the Eagles basically only played Bradham and Kendricks at linebacker, with Bradham receiving 100 percent of the snaps and Kendricks just 43. Dannell Ellerbe came in for three plays.

So was it really worth to pay Kendricks $7.6 million to play about 40 percent of the time?