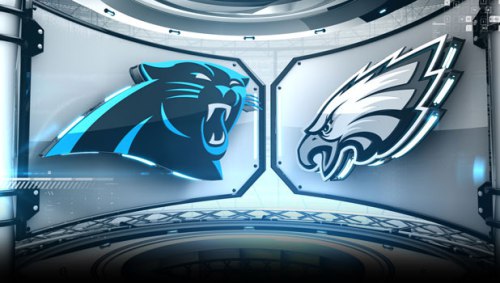 The Eagles got back on the winning path over a week ago with a win against the New York Football Giants on Thursday Night Football.

Now, the Eagles need to ride the momentum of a win to a string of wins to make sure they’re in good position to win the NFC East. The Panthers won’t be an easy task, and the Eagles were embarrassed by the Minnesota Vikings at The Linc – on my birthday – so the home-field advantage isn’t as potent as it was last season.

But it could make the difference this weekend. Torrey Smith returns and Cam Newton is never an easy quarterback to defend. It should be a good one Sunday afternoon at The Linc.

The Eagles don’t have to look too far for tape on how to stop Cam Newton and this Panthers attack. Playing a team in back-to-back years is a great resource when going up against such a diverse and multiple offensive attack. After last week’s performance, the Eagles looked like they had some semblance of chemistry and continuity. Facing a 1-4 opponent usually does that. There’s a much tougher test coming into The Linc this week. This will be a down-to-the-wire matchup where points will be at a premium.

After last week’s dismantling of the Giants, I genuinely think that the Eagles have themselves together. The offense is clicking – Alshon Jeffrey and Zach Ertz are consistent as they come and Nelson Agholor flashed big play ability again.

The defense still isn’t a finished product. In years past the Birds’ defense has matched up well against the Panthers offense. I think this game comes down to the Eagles being able to put up points and the Panthers won’t be able to match it.

The Panthers are one of those teams that are about 20 years old that have been around long enough and had some sporadic success to be considered real teams but still don’t have any character whatsoever (see: Orlando Magic, Houston Texans, etc). If Cam Newton played for the Giants or the Steelers, he’d be the biggest star in the game because those teams’ media are creative enough to craft narratives to hide his flaws. Instead, he plays for Carolina, a team no one honestly cares about that was founded and owned by a crusty old guy who was apparently a mix of the very worst of Sterling, Trump and Lauer.

Newton might be the most athletic freak the NFL has ever seen but he’s ruined it with his teenager Droopy Dog routine and his insistence to dress like some sort of hipster scarecrow accordion player during postgame interviews. If you have Christian McCaffery on your fantasy team, your season is already over and you know it, unless you’re Jigsaw and you’re still standing by he’s a Top 4 Fantasy RB (because Fournette is 5th).

This team is trash and so is the entire state. Carson takes the best step back to his MVP form, defense steps back up at home, and Crusher Doug snaps Riverboat Ron like a twig.

Did the Eagles finally flip the switch or are the New York Giants that bad? This is the question many of us have been asking after a convincing win that left OBJ and Giants management in the midst of a Meg Ryan and Tom Hanks You’ve Got Mail reenactment. Yes, I actually did watch that movie. But, now we go from Hollywood scandals to modern day superheroes.

Cam Newton has been wearing an “S” on his chest for some time now, but his kryptonite is defensive pressure. This is something we saw the Eagles come hard with last week. Obviously, the Panther’s offensive line is much more advanced compared to the Giants’, but when Fletcher, BG, and MB are hungry, they will find themselves a meal. This week that meal may be supersized!

The Panthers are talented and 3-2, but they’ve played better football in the last few years than they have to start 2018. The Eagles haven’t started sharp either, but last Thursday’s win over the Giants was a step in the right direction potentially for the offensive line. They allowed just one sack after surrendering 15 in the four games coming in. If the offensive line can continue to keep Carson Wentz upright, the Eagles should be able to move the ball against a suspect Carolina secondary.

I am not going to pick against the Eagles just to even out my predictions. Nope. I think the Eagles win the next two games, so mark me down for next week as well. Eagles roll but Cam keeps it close until the end.

I’m still not sold on this team, and it’s hard for me to separate what this group did last season and assuming they’d be able to just duplicate it this season. I know that’s not how it works. That’s not how any of this works. But I do think the big win against the Giants bodes well for the immediate future, and a home win is sorely needed after the terrible Vikings loss.

Maybe they pull away late, but a 10-point win cements the Eagles as still being the best team in the NFC East, and among the top in the conference.