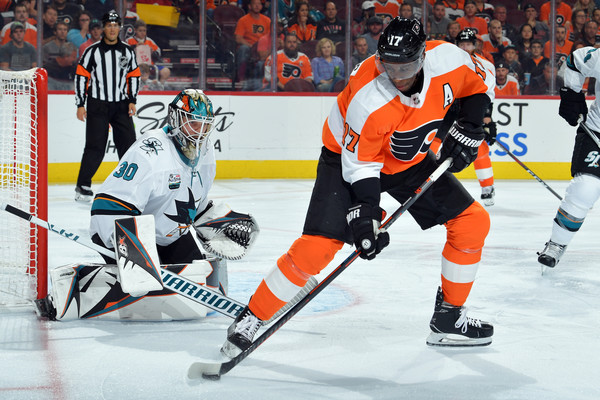 The NHL trade deadline is February 25th and the Philadelphia Flyers have some decisions to make regarding who should stay and who should go. After being dead in the water around Christmastime, the Flyers managed to completely turn things around and put themselves back in playoff contention, sitting eight points outside the last Wild Card spot with 25 games left. There are moves to be made at the deadline, it’s just a matter of what Chuck Fletcher wants to do. Let’s look to some hot names:

Simmer is an integral part of the team both on and off the ice. He proudly sports the “A” on his sweater as the right-hand man to Claude Giroux when it comes to leading the team.

Since joining the Flyers in the 2011-12 season he has amassed 203 goals and 173 assists, good for 376 points. He has truly embodied what it means to be a Philadelphia Flyer by many people’s definition.

It’s no secret that Simmonds’ contract is up at the end of the season and it appears the Flyers wouldn’t be interested in extending their beloved power forward. There is the theory that the Flyers are in the midst of a playoff push and they might want to keep one of their goal scorers around to help out.

I don’t buy that theory. The Flyers need to sell as high as they can on Simmonds at this point. Getting an NHL ready player, prospect or pick is more valuable than keeping Simmer around to get swept in the first round of the playoffs. He deserves better.

In the last eight years of wearing Orange and Black, Voracek has scored 150 goals and had 338 assists, totaling 488 points. *Captain Obvious anaylsis inbound* When Voracek is on he’s a damn good offensive hockey player; when he’s off he can be hard to watch.

Voracek, 29, is still in the prime of his career. He had a career high in points last season with 85, he has 49 through 57 games this season. When it comes to his contract, Voracek has 5 more years left at 8.25 million dollar cap hit per year.

That contract might be tough for Fletcher to move. However, I would absolutely entertain offers on the winger, I just don’t know that I see something coming to fruition.

Believe it or not, there’s a portion of this fan base that believes the Gostisbehere era in Philly should come to a close.

Since finishing second place in Calder voting, Ghost has been one of the better offensive defenseman in the league and an absolute force on the power play. Last season he finished with 65 points (13 g), this year through 57 games he has 25 points (5 g).

Sure, this has been a down year for the young defenseman, but for the most part it’s been a down year for the whole club. I wouldn’t put him on the trade block just yet, the talent level is there and 65 point defenseman don’t grow on trees. Plus, he’s under contract through the 2022-23 season at a 4.5 million dollar cap hit. Fletcher would have to get an absolute haul in return for the 25-year old and I don’t see that happening.

There are plenty other moves to be made; for instance, will the Flyers try to move on from Brian Elliott, Andrew MacDonald and/or Michael Raffl? Probably, but none of those moves would really move the needle. If MacDonald was to be moved, it wouldn’t be so much about the return but the opportunity to get Phil Myers some playing time. Regardless we should be in for an exciting trade deadline. I doubt Fletcher stays silent.