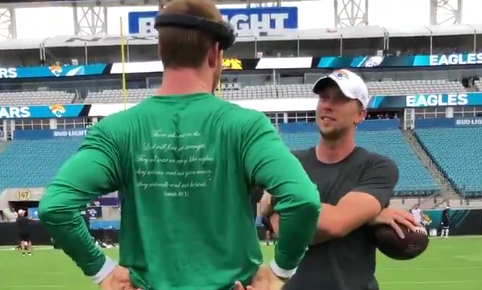 After Wentz’s backup Nate Sudfeld broke his left wrist during the Philadelphia Eagles’ preseason opener, another quarterback went down Thursday. Cody Kessler exited in the first quarter of Philadelphia’s 24-10 victory over the Jacksonville Jaguars with a concussion.

The Eagles are now left with two healthy quarterbacks on the roster in Wentz and fifth-round rookie Clayton Thorson, who finished the game and was 16-of-26 for 175 yards with a touchdown and an interception. Kessler completed one pass for 11 yards on four attempts before taking a shot by the Jaguars’ DaTone Jones, which forced him into the medical tent.

Head coach Doug Pederson said after the game that the Eagles are looking at signing a quarterback at the moment.

Pederson believes the team can head into practice next week with two quarterbacks.

“We can get by with the two guys. It does put a little more load on both of those guys. Until we can evaluate Cody further, we’re not ruling him out until we evaluate him.”

As for Wentz’s former backup Nick Foles, he and Carson exchange pleasantries before the game.

Carson Wentz reuniting with Nick Foles is the content we all wanted to see. #PHIvsJAX

Wentz has yet to take a preseason snap and I doubt he’s going to be in line to take many next week against the Baltimore Ravens, which means Thorson is going to get the rest of them. Kessler is now in concussion protocol and Sudfeld isn’t expected to be back until Week 3 of the regular season.