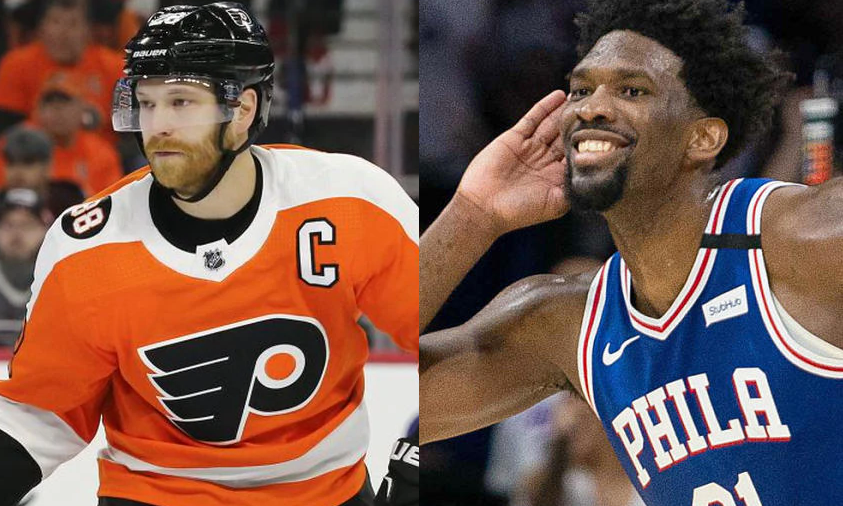 With a month and change left in their respective seasons, I think it’s safe to say nobody predicted the way the Philadelphia 76ers’ season and Philadelphia Flyers’ season has played out thus far. One team is on fire, having won nine straight games to pull into a first-place tie in their division, and one team, even with their two top stars in the lineup, has continually struggled since October to really get in a groove and look like the contenders we all thought they would be.

The Flyers had a bunch of question marks heading into this season with new head coach, Alain Vigneault. I was certain at this point we would’ve seen Jake Voracek already traded, and possibly James van Riemsdyk… again. But as of this writing, the Flyers are tied with the Washington Capitals for first place with 89 points in the Metropolitan Division. The Capitals technically hold the tiebreaker, because in the NHL, the first tiebreaker goes to the team that has more regulation wins vs. overtime wins – all this despite the Flyers being 3-0-1 against the Capitals this season.

This season, we found out that no matter what Brett Brown has at his disposal on the roster – regardless if he had a hand in building it with Elton Brand – he just can’t seem to make it work. I was willing to give Brown this season to prove something after last season, and I was willing to give him a rather long leash. But with the same issues plaguing the team – mind-numbing turnovers, starting rotations, bench rotations, and a new inability to win a basketball game away from Philadelphia – we’ve seen the Brett Brown Era slowly come to an end.

And that’s just assuming the Sixers don’t advance very far in the playoffs again. We have to wonder if they, by some miracle, get to the Eastern Conference Final, would keep Brown for next season. With Elton Brand at the helm, and Joshua Harris completely disinterested in the team he owns, it actually wouldn’t surprise me. However, I don’t think that’s going to happen.

The Sixers came into this season with lofty expectations. They added Al Horford, which many people talked themselves into being a good move given the Sixers had no backup center to spell Embiid, which was an Achilles heel last season. But then Horford was put on the court alongside Embiid, which just caused a bunch of basketball nonsense on the court. Tobias Harris was given a five-year, $180 million contract, and has, well, under-performed; maybe not for Harris himself, but for that type of contract. Keeping J.J. Redick would’ve probably been the play there.

Brown certainly isn’t the only one to blame for how this season has played out so far, and Brand deserves just as much blame. But I think it’s clear by now, Brown isn’t the guy that will lead Simmons and Embiid to a title. And Brand isn’t the guy who will be able to surround Simmons and Embiid with complementary players. Less than a year ago, they took the Toronto Raptors, the eventual NBA Champions, to a seven-game series. And lost on literally a bounce. They were poised to take that next step. But they’ve taken a large leap backwards. Of course, the season can turn around. We’ve seen teams that have struggled finally put it together to make a run. That could absolutely happen here. But the thing is, especially on the road in addition to playing games that “don’t matter” to some of these stars, there leaves a lot of doubt among fans, local and national pundits. The only way to erase those doubts is to rack up wins.

It certainly feels like the Flyers and Sixers have swapped roles right now. The expectations heading into this season were more of a building process for Vigneault and co., and quite possibly an overhaul of the roster within the first few months. But the team has responded and looks completely different on the ice than they did years prior. The game isn’t over when they give up the first goal. Carter Hart is nearly unbeatable at home, posting a 20-2-2 record, and becoming the first goaltender in NHL history to have multiple winning streaks of seven games or more, 21 years old or younger [Hart racked off eight straight wins last season.] While Hart still needs to settle down on the road, and Vigneault needs to give him that opportunity before April’s second season begins, it really feels like the Flyers’ expectations are now even further than just making the playoffs.

That’s what happens in sports. Expectations change midway through seasons. Even in post-seasons. The Flyers’ stock is rising, and the Sixers’ is falling. I want to see Embiid win more than anything, but something has to change in the Sixers organization for that to happen. The NBA is run on stars, not on coaches or general managers. It’s up to the Sixers to right the ship. Meanwhile, the Flyers aren’t just winning games by beating weak opponents. They’re beating the good teams. They are beating the teams in their own division, which weighs more in the NHL because a team may have to face a division rival in the first two rounds depending where they finish. They’re playing good hockey and can overcome bad plays or even bad periods. That was missing from this team for a long time. They’re not having trouble scoring goals, which was also an issue for a long time. They have a goaltending duo that allows the team to play better in front of them. When’s the last time that happened? These are expectations that were hopeful heading into the season, but not completely realistic. But now we’re in March, and there’s a big enough sample size from both the Sixers and Flyers to realize the expectations have changed for both teams, exactly the opposite they were heading into the season.

Maybe the Sixers catch lightning in a bottle. It can happen. We’ve seen them play solid games this season, the problem is they can’t seem to continue that from game to game. And they can’t beat a 14-win Warriors team on the road. It’s a continuing problem that hasn’t been addressed by anyone on the team. And trends like this usually manifest themselves into firing the coach or general manager, or both. Which will it be after this season?

As for the Flyers, expectations could change from now through April, but right now, an exit in the first or second round of the playoffs might very well feel like a letdown.