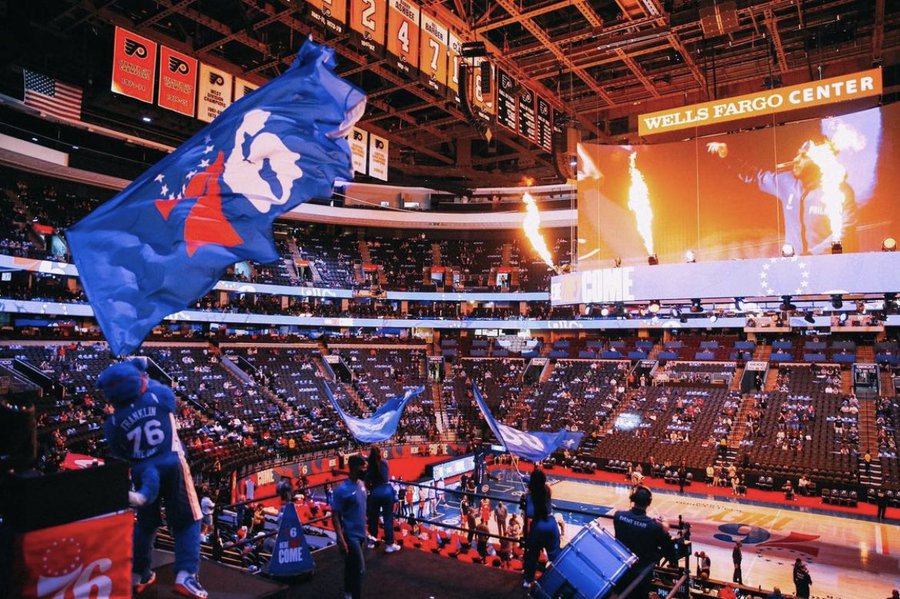 It’s Monday morning, and you know what that means. We’re back with an all-new Morning Brew.

The Sixers locked up the No. 1 seed for the first time in 20 years and are showing some big energy. The NFL released schedules for the upcoming season, so of course we need to take a closer look at the Eagles’ schedule. WrestleMania Backlash took place last night, and we might’ve gotten a preview of a future challenger for the Tribal Chief. All that and more in today’s Brew.

The Eagles’ schedule is a work of art

Our 2021 schedule is truly a work of art, presented by @Hyundai.

What about the potential win-loss breakdown?

More thoughts on the schedule

Here’s what jumps out to me about the Eagles 2021 schedule, with an over/under and bold prediction: https://t.co/42xlmwkPxg

Sixers lock up the No. 1 seed

The Sixers will lock up their first 1-seed in 20 years with a win tonight against the Pacers. pic.twitter.com/ljEj60xHeT

What do you think of their chances?

The Sixers are the 1 seed.

The Nets, Bucks and Heat are all on the opposite side of the bracket.

What do you think of the Sixers’ chances to win the East? pic.twitter.com/dkejJ5QkxV

Some background on the Big Energy Chain in case you’re new here.

The Head of the Table stood tall at WrestleMania Backlash

Roman Reigns beat Cesaro via submission in a great main event. Clean in the middle, both Jimmy and Jey nowhere to be seen.

Wow, what an end to #WMBacklash 👀

Seth Rollins brutalises Cesaro and he does it in style ⚡ pic.twitter.com/CBCme0yM21

A preview of things to come?

WAIT THIS HAS GOT TO BE NEXT RIGHT?

I have no idea what’s going on here

Big Man on the move

But Lashley is still your champion

HISTORY HAS BEEN MADE 🙌🙌🙌@reymysterio & @DomMysterio35 have become the first-ever father and son to win Tag Team Titles in @WWE! #WMBacklash pic.twitter.com/i1h6NwXIT1

Wild developments in the MOVE bombing

Philadelphia’s top health official has been forced to resign because he had human remains from the 1985 MOVE bombing cremated and disposed of without notifying family members. Mayor Jim Kenney said Thomas Farley’s decision lacked empathy. https://t.co/NjKGyPYwDO

BREAKING: The remains of MOVE members were NOT discarded and have been FOUND in tact — a subordinate disobeyed Health Commissioner Farley’s orders to dispose of the remains. https://t.co/0vhDjbLN2K

The MOVE victim remains ordered cremated in 2017 by the health commissioner have been found, per Mayor Kenney. The Africa family is being consulted, he said — but this only leads to more questions.

We have children representing Congress

Madison Cawthorn, a Republican candidate for the House from North Carolina, created an attack website accusing a journalist of leaving a job in academia “to work for non-white males, like Cory Booker, who aims to ruin white males running for office.” https://t.co/6975jQP7nE

How about a little Hitler action for Hawthorn?

Just seeing these @CawthornforNC Instagram posts from 2017…my god.

Referring to Hitler with the honorific “Führer.” Saying a visit to Hitler’s vacation home where he planned out unspeakable atrocities as a “bucket list” moment…as if it’s a visit to the Grand Canyon pic.twitter.com/AvgNSe23cO

Hitler not your thing? How about being a sexual predator?

What about lying about the Paralympics?

BUSTED: GOP’s Madison Cawthorn Paralympic story is a lie — according to athletes https://t.co/rMzlXcdeCG

Don’t worry folks – Hawthorn can beat up a tree

Why is Madison Cawthorn beating up this tree? pic.twitter.com/T4FcjiVQDZ

Speaking of class acts in the GOP and Congress, more leaks for Matt Gaetz

EXCLUSIVE: When Matt Gaetz attended a 2019 GOP fundraiser in Orlando, his date that night was someone he knew well: a paid escort and amateur Instagram model who led a cocaine-fueled party after the event, according to witnesses https://t.co/uK6qfMkrwB

Gaetz has a huge problem on his hands

Rep. Matt Gaetz is still a sitting member of Congress in good standing.

But that could all change, now that his close friend and associate has pleaded guilty to a slew of federal crimes including sex trafficking of a minor. pic.twitter.com/4SvtHLsiEr

Seems like a good day to remind people of the time Matt Gaetz got a slurpee thrown at him… https://t.co/gQEHasD6pu

I’ve said it before, I’ll say it again – Marjorie Taylor-Greene is a dangerous lunatic

Marjorie Taylor Greene seems really smart and not at all crazy. pic.twitter.com/WKFfeHm6Rg

Taylor-Greene of course has dangerous friends

Anthony Aguero, a close associate of Marjorie Taylor Greene has been identified as one of the insurrectionists storming the Capitol on January 6th pic.twitter.com/ZYYkG9xNXe

Liz Cheney told Fox News it has an “obligation to make sure people know the election wasn’t stolen” during a combative interview with Bret Baier on Thursday. https://t.co/0Z4hUygYST pic.twitter.com/KYzHfb90ui

Liz Cheney: ‘We’ve had a collapse of truth in this country’https://t.co/fraJxpgLYK

Cheney told Karl that McCarthy “absolutely should” testify before any commission, and that she “wouldn’t be surprised if he were subpoenaed.” https://t.co/EeNGKfLfr3

‘CRIME OF THE CENTURY!’ Trump issues furious statements lashing out at Pence and Mitch McConnell for his election loss https://t.co/VlvgBhuitN

“We can’t indulge these insane lies any longer. As a party. As a state. As a country,” Maricopa County Recorder Stephen Richer tweeted.​ https://t.co/Cs1pXW3k8i

Rep. Andrew Clyde is lying through his teeth and this video exposes his lies

And there’s also this

Rep Andrew Clyde helping to barricade the door from the “tourists”. pic.twitter.com/XZ7ct4FrAZ

The Israeli-Palestinian battle has escalated

A cease fire is needed

Members of the United Nations Security Council, including the U.S. and China, call on Israel and Hamas to immediately halt more than a week of deadly fighting https://t.co/t2MoFqhQzt

Look at this craziness

Iron Dome. All you need to know perfectly encapsulated in one photo. pic.twitter.com/vqE5Jku4Dt

RAW FOOTAGE: This is the moment the Iron Dome intercepted a barrage of rockets over Tel Aviv and central Israel. pic.twitter.com/8jl8OTgWCl

We’re almost back in business

UPDATE: If you are fully vaccinated against #COVID19, you can resume activities without wearing a mask or staying 6 feet apart, except where required by federal, state, local, tribal or territorial laws, incl. local business and workplace guidance. More: https://t.co/FJMon7WlFO

Ricky Schroder is a nerd

New Jack was a legend

A look back at Kobe Bryant’s Hall of Fame career 🏆

“You did it. You’re in the Hall of Fame now. You’re a true champ. You’re not just an MVP. You’re an all-time great. I’m so proud of you. I love you forever and always. Kobe Bean Bryant.”

You’ll always be the kid from Philly. pic.twitter.com/lbgWJ4F8UN

Your 2021 Basketball Hall of Fame Class

At 33 years old, Steph Curry joins Michael Jordan as the only players in NBA history to lead the league in scoring in a season at age 33 or older. pic.twitter.com/NyJvNfmQsv

Here was the basket that did it

With this basket, @StephenCurry30 has secured the 2020-21 @NBA scoring title 👏 pic.twitter.com/oenaw1PNb5

LaMelo with the dime

LaMelo with the full-court dime! 🙌

the highlight of the year – with replays. check this Blake Griffin pass from the above the rim camera. pic.twitter.com/sguHkNIDf9

Congrats to Rombauer and connections for winning the @PreaknessStakes 🏆🏇🏿👏 #Preakness pic.twitter.com/VkxcNXsVVC

Marv Albert will call it a career

Marv Albert is reportedly set to call it a career after nearly 60 years on the mic. 👏 😢 🎙 https://t.co/jageXLOoF3 pic.twitter.com/OyDoVUbrxX

Marv Albert is reportedly set to retire after the season. Growing up my enduring images of basketball were MJ, Magic, Marv and the NBA on NBC theme. This opening for the 1991 Finals combines all four.

I need this right now