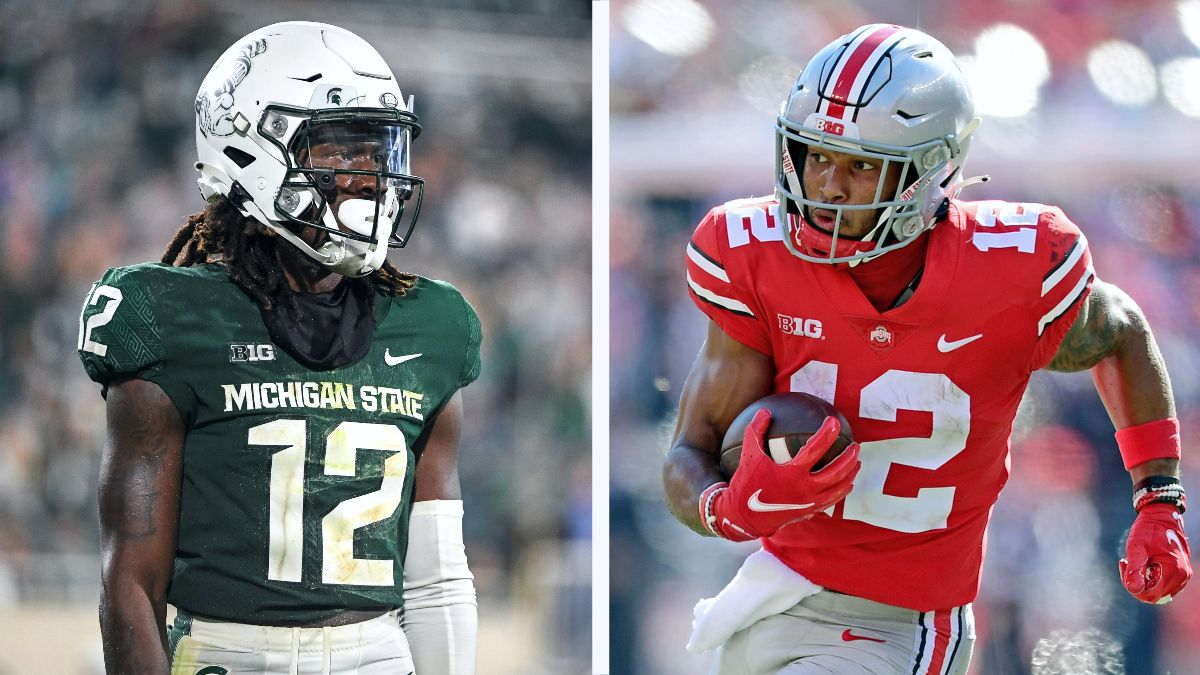 It’s been to long Influcencer Fam… It’s been to long. Apologies as I’ve been backed up at work and had a vacation in the middle, but its not an excuse. It’s football season, and I didn’t put out posts for the last 3 weeks. For that, I apologize.  All I can do is roll up my sleeves and try to make it up to you this week with a 6 pack of picks.

I’m going to rattle off a list of schools that have a few things in common:

First thing they have in common is those are all the teams that Ohio State has beaten this season. Second thing is none of those teams are in the top 25 in any poll at the moment. Ohio State has done a great job at beating up inferior competition, but they haven’t had a real challenge game all season long except for the Oregon game which they lost. They are now having their first real game (in my opinion) since week 2, and they are laying 19 points in it.

Sparty has 1 impressive win over Michigan, and otherwise I can say the rest of their wins are in the same bucket as Ohio State (in the ‘Meh’ column). But 19 points is to many in this scenario and I also believe that everyone in Columbus automatically looks forward (at least somewhat) to the Michigan game next week, which could be exactly what Mel Tucker and company need.

The official pick here will be Michigan State +19, but sprinkle some on that ML at +650 as well for a long shot

The committee had been calling out Oklahoma ever since the playoff rankings came out, and last week the Sooners proved them right. Oklahoma played their first tough game of the season against Baylor, and just looked over matched. I think there are to many issues on offense with this Sooners squad right now to feel comfortable laying points against an Iowa State team who weirdly in my opinion is more proven on the season.

Iowa State has wins against Oklahoma State and Kansas State (to be clear OU beat Kansas State also) who are two of the better teams in the Big 12, and also lost a heartbreaker to Baylor by two. The Cyclones have more experience with Breece Hall and Brock Purdy running the offense compared to Oklahoma (do we even know who is playing QB anymore?). Yes, Iowa State is coming off of a bad loss to Texas tech, but I’m taking that as they got caught in a look ahead game to this week against the big name in the Big 12.

The line movement has been telling us all week its Iowa State, so I’m getting in before the spread drops again, give me Iowa State +3.5

The strangest spread of the week and arguably the season is coming from Salt Lake City late Saturday night. Oregon is certainly more banged up than Utah, but their major pieces in Thibedeaux, Brown, and Dye are not listed on the injury report. Utah on the other side has been impressive as of late, with wins over Stanford and UCLA by at least 20 points, who are both teams that Oregon struggled with. I think that’s the main thing the odds makers are using to make this line is that common opponent comparison, but I just don’t buy that is enough given how talented this Oregon team is.

People have come to expect the Pac 12 to fall on its face right before the playoff, but Oregon to me is the best Pac12 team we have seen in the past 5 years (admittedly, not saying a ton) and I think they pull out the win in Salt Lake outright.

Two out of the last three times these teams have met, Oregon won by 20 plus points and neither team is riding a real hot streak ATS as both of them are 3-2 ATS in their last five outings.

Our total here sits at 48.5, and that number to me is telling me the books are expecting Kyler Murray to play in this one. Assuming that is correct, I believe that can jump spark an Arizona offense that only put up 10 points last week in their worst loss of the season to the Panthers.

We also saw what happened to Seattle last week in Green Bay in Russel Wilson’s return from injury, and it was a disaster with the offense putting up a goose egg. Is Seattle a great team this year, no, but this offense still has the capability to be a top half unit in the league, and I’m thinking of last week as more of an anomaly.

The Cardinals defense has been good this year, but we just saw them exploited by an injured Carolina panthers team scoring 34 points on them.  I think Seattle comes back in this game and puts up some points, and again assuming Kyler is back, Arizona is going to score like they have been able to do all season.

Give me the over 48.5 in this matchup

Dallas’ last two weeks couldn’t have been more opposite. We saw them lose as 10 point favorites against the Broncos (in convincing fashion), and then we saw them obliterate the Falcons in what might have been the most painful blowout of the season. Dallas has been overall a very good team this year, there is no denying that… and they are the best team this season ATS sitting at 8-1, but on their schedule I haven’t been impressed with an individual win of theirs in terms of the competition. Their best win is probably against the Patriots before they went on their current run

We know the Chiefs haven’t been the Chiefs of the last few years for most of this season, but I think we saw the light bulb go on last week with that dominating win over the Raiders. While they haven’t been good ATS overall, KC has now won 4 of their last 5 straight up, and I think they are starting to make their push to take over the AFC West. For me, this is all about me buying that KC has figured out their limitations, and if that’s true, 2.5 points is not enough for the Cowboys to keep up.

A game that really does have a lot of NFC playoff implications on the line. The Eagles run game has been critical to their success over their last 3 games, and I think we are all hoping that Sirianni sticks with that gameplan (or at least close to it) going forward through the rest of the season. But this Saints defense has allowed the fewest Rushing yards in the league this season at 656. Through 9 games, that means teams are averaging only 73 rushing yards per game against New Orleans. That scares me for what this Eagles offense will be able to achieve this week, as the run has been the key to their success.

On the other side, the Saints have the second fewest passing yards in the league, and are second to last in completion percentage which is what teams have been exploiting against the Eagles all season long. I’m also not buying into any drastic improvements from Trevor Simien or Taysom Hill this week (or even this season really).

This is lining up to me like each team’s offense is playing into the hands of the opponents defense, and that total is low for a reason.

Give me the under 43 in that matchup on Sunday

Good luck to all this weekend!