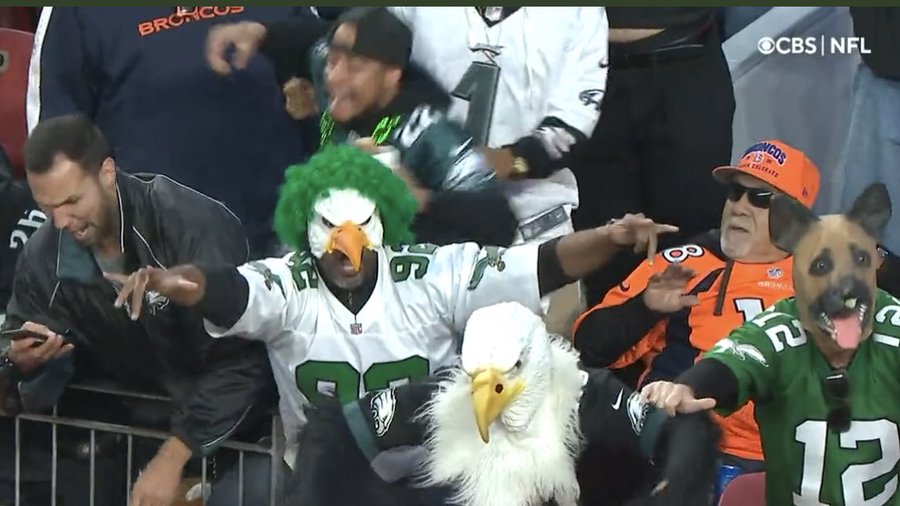 We’re back at it with an all new Brew. The Eagles and Broncos did battle yesterday and believe it or not, the Birds took it to the Broncos. Ben Simmons continues to find ways to stay in the headlines. A broadcasting legend in Philadelphia is retiring. AEW put on one hell of a show on Saturday night for Full Gear. So let’s not keep you waiting any longer, it’s Brew time.

“The Celtics & 76ers did have conversations about Ben Simmons.. those conversations ended when the 76ers asked for Jaylen Brown” ~@ShamsCharania #PatMcAfeeShowLIVE pic.twitter.com/qVosad5qG3

Rich Paul and Ben Simmons have no shame

Rich Paul: “I truly believe the fines, the targeting, the negative publicity shined on the issue — that’s very unnecessary and has furthered the mental health issues for Ben. Either you help Ben, or come out and say he’s lying. Which one is it?”

More on what Roseman is potentially up to

Eagles come away with the Win

Eagles roll in second half to down Broncos at Mile High Stadium – by @lhenry019 – https://t.co/7WDN9BQNBt

DeVonta Smith had a great first half

#BREAKING: Longtime 6abc/WPVI-TV veteran @Jim_Gardner announced he is dialing back his schedule with Action News and plans to retire at the end of 2022 after more than four decades in broadcast. https://t.co/kJ95Bb52py

If you believe the tears are real, boy do I have some things to sell you

LeBron James was one of those who criticized the 18-year-old after he broke down while on the stand during his homicide trial on Wednesday. https://t.co/fUCzDAFkZT

Tonight Tucker had a Rittenhouse defense witness on and Hannity has the mother on….because of course pic.twitter.com/Y5LyTYn0F0

Paul Gosar is sick and twisted

This is sick behavior from Rep. Paul Gosar. He tweeted out the video showing him killing Rep. Ocasio-Cortez from both his official account and personal account. In any workplace in America, if a coworker made an anime video killing another coworker, that person would be fired. pic.twitter.com/0ygBfE6bEL

Please make this loser go away

📺 Sen. Josh Hawley tells #AxiosOnHBO that he’ll make masculinity a signature political issue, because he claims “the left” is telling men: “You’re part of the problem…Your masculinity is inherently problematic.”

Gene Simmons has something to say about the unvaccinated

Brian Williams is moving on

After 28 years at NBC, Brian Williams has announced he will be leaving the network.

“I have been truly blessed,” Williams wrote. “I have been allowed to spend almost half of my life with one company. NBC is a part of me and always will be.” https://t.co/RwtBrmhrIO pic.twitter.com/yWm6vBD7yp

Prices are skyrocketing for U.S. Consumers

BREAKING: Prices for U.S. consumers jumped 6.2% in October compared with a year earlier as surging costs for food, gas and housing left Americans grappling with the highest inflation rate since 1990. https://t.co/9VQXg65c2L

The attorney for a Black teenager from Texas says several teenagers attacked his client with a stun gun on Halloween while wearing robes resembling Ku Klux Klan costumes. https://t.co/vrnzHlvY6T

.@Adele appears on our December cover. In one of her most candid interviews, she details how she turned heartache over her divorce into her most honest album yet.https://t.co/IYX48HPrCF pic.twitter.com/YpowPyGMcB

BREAKING: Britney Spears is free to make her own medical, financial and personal decisions for the first time since 2008. A Los Angeles judge has ended the conservatorship that controlled Spears’ life and money for nearly 14 years. https://t.co/EPGVvd1j4k

Verzuz is heating up to end the year

Hope y’all ready to finish the year by celebrating these legends! Tweet us your guesses for #VERZUZInternational 👀

This article is worth the read

Is someone jealous of John Cena?

Easily best moment of the night so far #AEWFullGear pic.twitter.com/QKnw3lZtiO

First wrestling match I ever seen live is MJF vs Darby Allin are you kidding me pic.twitter.com/ZMX4m69PlJ

1 on 1 with the Undertaker

1-on-1 with WWE’s Undertaker: WrestleMania memories, plus a moment in Arlington during WM32 he’ll never forget https://t.co/LCnx0qHjig

UCLA took down the Wildcats in a showdown

College basketball is back baby!!

Nikola Jokic snapped and got the WWE treatment

Steph Curry is a bad man

Dalvin Cook could be in big trouble

Dalvin Cook has a serious legal issue to deal with, and it can’t be spun by his camp into convenient oblivion. He’ll eventually need to prove his version with facts, not self-serving Schefty tweets. https://t.co/Xp8sN7liX1

Adam Schefter offers “apology” for not reaching out to Dalvin Cook’s accuser, with his second attempt a bit better https://t.co/GG7xERE5zY pic.twitter.com/Q5H5g3Vqg7

Aaron Rodgers received a slap on the wrist

The NFL has fined the Green Bay Packers $300,000 and two of its players, Aaron Rodgers and Allen Lazard, $14,650 each for not following Covid protocols agreed on by the league and players’ union. https://t.co/eNTPTnoImS

CeeDee Lamb was fined $20k for having his jersey untucked last week. Aaron Rodgers was fined $14k for ignoring COVID protocols all season. I get the enforcement rules are different, but it just looks bad and doesn’t add up.

One of the greatest plays that didn’t count in NFL history.

The Rams make a splash

The Rams have agreed to terms with WR @obj. pic.twitter.com/AX6vM4mWXw

Cam Newton is back and making a difference on the field

“I’m just happy to be back, happy to be a contributor to a team that’s already good, we’re just trying to get over the hump… Keep pounding.”@CameronNewton joined @Sara_Walsh after scoring two touchdowns in his return to the @panthers! 💪 pic.twitter.com/OV47bVg3oB

Conor McGregor is a nerd