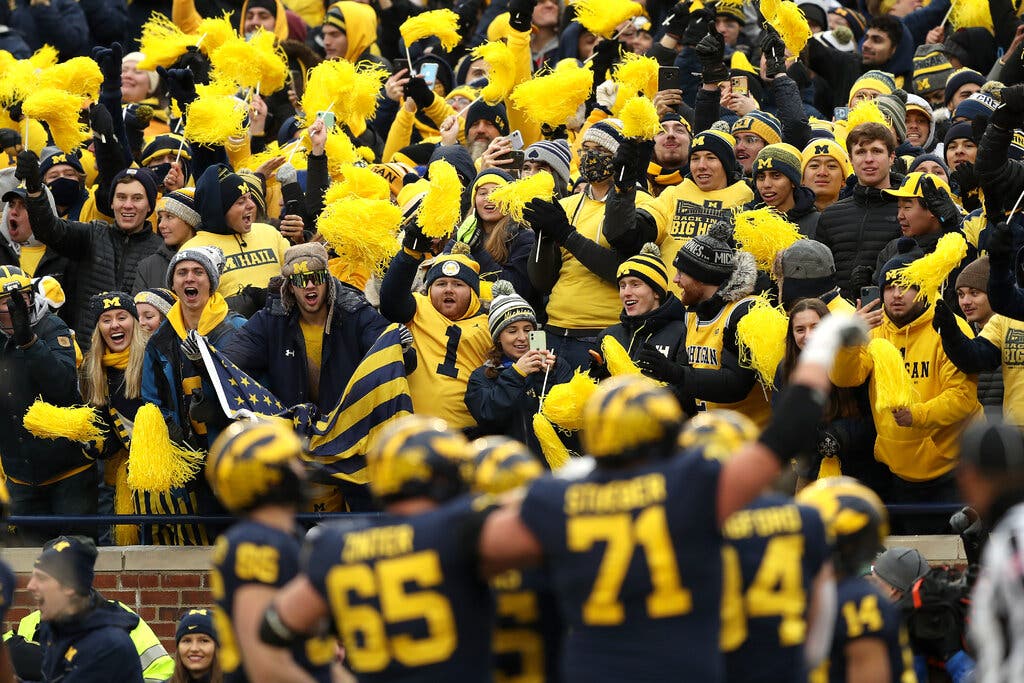 We’re back at it with an all new Morning Brew. The Birds did battle with the Giants and stunk up the joint. It was a wild weekend in College Football. Joel Embiid is back after his bout with Covid. Let’s get right to it. It’s Brew time.

The Eagles sucked this week

The @Giants defense balls out as they hold the Eagles to just 7 points at home! pic.twitter.com/Xdv8tbuev3

That should be the official end of Jalen Reagor’s Eagles career #FlyEaglesFly pic.twitter.com/YNblJZMBus

The Vikings front office was literally laughing at Howie Roseman and the Eagles when they drafted Jalen Reagor over Justin Jefferson. pic.twitter.com/pYxufbgPm3

Someone put Jalen Reagor up for sale for $5 on Facebook market. 🤣🤣🤣 pic.twitter.com/UsyYMhhb1T

Joel Embiid returned to the Sixers lineup on Saturday night

The G.O.A.T. rang the bell at the Sixers game

Minnesota got the dub in double OT

we’ll call that one the Philly special. pic.twitter.com/1ZYeaQZfr5

The Phillies missed out on Starling Marte

The @Mets have reportedly agreed to a 4-year deal with OF Starling Marte, per @JonHeyman. pic.twitter.com/isK2HMU0Lo

The Mets made a splash for sure

The #Mets have a Black Friday to remember: They sign free agent CF Starling Marte to a 4-year, $78 million contract per @JonHeyman, after signing Eduardo Escobar and Mark Canha earlier in the day. Total expenditures: $124.5 million.

Max Scherzer and the #Mets are close to finalizing a multiyear deal, source confirms. @MLBNetwork @MLB

The Flyers postpone a game

You sir get a free hat

Toews chucking on a hat after Mikko’s Hatty pic.twitter.com/macEeQJ3ZE

I see no lies

NEW: At a hearing for a Capitol rioter defendant, a federal judge took aim at Trump for lying about voter fraud during the 2020 presidential election, saying that Al Gore had a better standing to challenge the 2000 election results but that he was “a man” and walked away.

Subpoenas for the Con Man’s squad

The committee is demanding records & testimony from 5 witnesses who helped or had knowledge of the planning and financing of the rallies in D.C. and the violent attack on the U.S. Capitol. pic.twitter.com/MQMPAnrmXu

“If he didn’t break the law, we should change the law.”

A Con Man posing with the Kenosha Killer

Who else finds this DISGUSTING? 🤢 pic.twitter.com/xC2hnMzTZp

In not shocking news

If you support this man, you really should question yourself

“Trump seeks a Michigan Legislature that could help him in 2024.”

BREAKING: Gregory & Travis McMichael and William “Roddie” Bryan have been found GUILTY for the murder of Ahmaud Arbery! pic.twitter.com/gqq22MOU5k

This was a no brainer

BREAKING: A Georgia jury has convicted three white men of murder in the death of Ahmaud Arbery. https://t.co/GwTdXCyP5H pic.twitter.com/LNp0tsmhOI

Jackie Johnson is a disgrace

Jackie Johnson was criminally charged for her role in covering up the murder of Ahmaud Arbery. This woman violated her oath as a district attorney in Georgia to facilitate a lynching. It’s about time we start holding prosecutors accountable.

Over the Thanksgiving break, Lauren Boebert said she was recently in a Capitol elevator with Ilhan Omar when a fretful Capitol police officer ran up.

Lauren Boebert said: “Well, she doesn’t have a backpack. We should be fine.”

After the blowback, Boebert had to “apologize”

I apologize to anyone in the Muslim community I offended with my comment about Rep. Omar. I have reached out to her office to speak with her directly. There are plenty of policy differences to focus on without this unnecessary distraction.

WARNING GRAPHIC ⚠️ Man in Texas shot and killed the father of his girlfriend’s kids over a custody dispute. No charges filed. pic.twitter.com/JUp4FZPqFu

The situation in Ethiopia is bad

A new Coronavirus variant has been detected

A new coronavirus variant has been detected in South Africa that scientists say is a concern because of its high number of mutations and rapid spread among young people in Gauteng, the country’s most populous province. https://t.co/mQpjyaztnN

There will be more cases

VIRUS LATEST: Dutch authorities confirm 13 cases of the omicron variant in people who arrived in the Netherlands on flights from South Africa on Friday, via @AP https://t.co/YwSLTgR70j pic.twitter.com/6ebkpvDjAP

The Rock comes through for this Navy veteran

Ben and Jen aren’t married — they’re not even engaged, yet — but they are sure acting like a couple that already tied the knot. https://t.co/wChdXOkdqL

Barstool Sports Bar is opening in the former Brickwall Tavern on Sansom Street across from Fergie’s, per The Inquirer https://t.co/35nsh81axE

The NYPD says 24-year-old Elisah Spencer of Brooklyn ran at WWE star Seth Rollins and tackled him during a live broadcast of the WWE Raw television show at Barclays Center. https://t.co/llnmz0H83q

When the Cowboys lose, America wins

The @Raiders take down the Cowboys on Thanksgiving! pic.twitter.com/uOJXItzDHS

Let’s see some highlights from the Dallas Loss

Led the way to another clutch W.@derekcarrqb‘s best plays from today’s win in Dallas.

A couple chicks throwin it down at the cowboys game tonight pic.twitter.com/TkMoxWu7ap

What College Football is all about

THIS. IS. COLLEGE FOOTBALL.

Football is so beautiful in the snow

JAHAN DOTSON 2ND OF THE DAY❄️#CFB

Down go the Sooners

JUMP AROUND IS MID THE AXE IS STAYING HOME CALL UP BLARNEY’S CALL UP SALLY’S IT’S A PARTY IN MINNEAPOLIS pic.twitter.com/oVTsRhzV8N

FSU’s kicker whiffed the onside kick but the ball fell off the tee and was recovered by Florida pic.twitter.com/Mq8ybJLeZD

LSU pulled it off

LSU TOUCHDOWN TO TAKE THE LEAD WITH 20 SECONDS LEFT! pic.twitter.com/gPsmQa6by8

GAME. OVER. 🐘🔥@AlabamaFTBL wins the Iron Bowl in 4OT! pic.twitter.com/yYIFxsHzBd

Auburn had 1 job to do

BRYCE YOUNG.
ICE
IN
HIS
VEINS 🧊

Next week will be just as wild