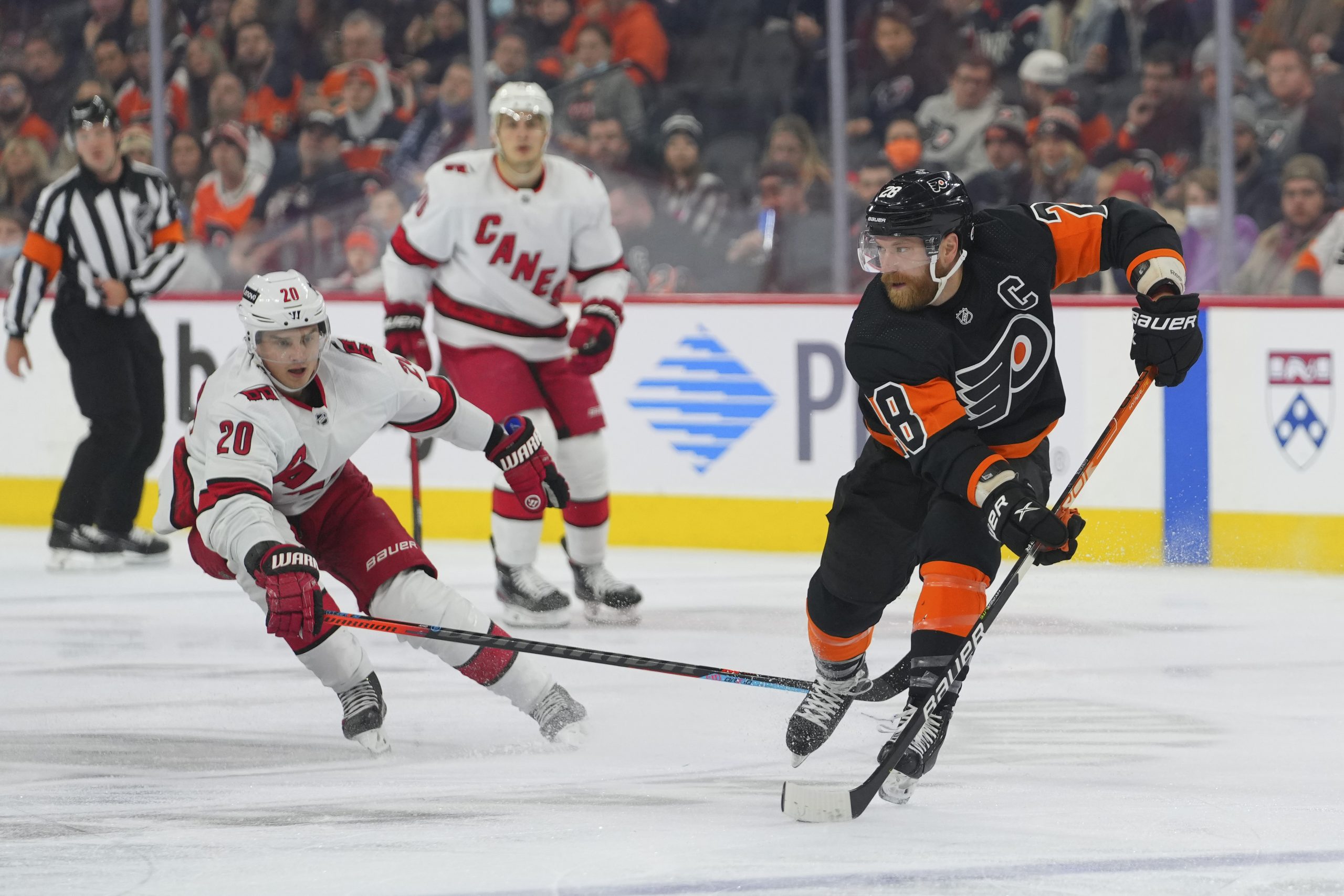 The Philadelphia Flyers haven’t been able to snap their losing run over the past week and with another trio of tough division games coming up, the team will be expected to find a win at all costs to move back up the league standings.

Friday’s 6-3 home loss to the Carolina Hurricanes extended the Flyers’ losing streak to five games, moving them to sixth place in the eight-team Metropolitan Division. Despite promising results against the Tampa Bay Lightning and Florida Panthers that saw Alain Vigneault’s team pick up points in shootouts, the opportunity was there to claim a full two points.

Now with the losses piling up and the team showing some similar signs to 2020’s struggles, the head coach backs the team to find a way to turn it around.

“We’re obviously being challenged here as an organization, and we’re being stretched out as far as player personnel up here and with our farm team,” Vigneault said after Friday’s loss to Carolina. “It’s a challenging time but everyone has to be better and that’s starts with me. We have to do a better job making sure that guys perform to their level. When we look at our group right now, there’s few guys in my estimation that could give us more, give us better and that’s what we gotta do. We gotta stick together as a group. Everyone, starting with me, needs to find a way to be better, and that’s what we’re going to try to do tomorrow.”

“We know we can play better,” Flyers captain and center Claude Giroux said. “We know we can support each other better on the ice either on the offensive zone or the defensive zone. We gotta play a unit of five and right now we’re not.”

The Flyers have conceded four goals or more in four of their last five games, seeing both Carter Hart and Martin Jones struggle to find success from earlier this regular season. Hart and Jones have done enough to put the Flyers in decent situations, but defensively the loss of Ryan Ellis hasn’t helped the unit as a whole.

Offensively, the Orange and Black have scored two goals or fewer in three of the last five games, again showing similar signs to moments of last season. Travis Konecny, James Van Riemsdyk, and Sean Couturier have been ice old over the past week, with only one goal between them over that span, forcing the team to find other ways to get the puck in the net.

Despite some best efforts from Giroux, Farabee, and some lower-line players, the team is struggling to make the most of point-blank chances in front of the net.

“I mean the top two lines were not playing great,” Giroux added. “It’s not line by line, I think as a team we’re flat. We’re not playing the best we can and there is a lot of frustration. We have to reset here and figure it out.”

The Flyers have little time to waste before another busy stretch comes this week with three games over the next four days. First the Orange and Black will visit the New Jersey Devils on Sunday before a trip to the red-hot New York Rangers on Wednesday, two teams they will meet for the first time this season.

The team also has future matchups with Tampa Bay, Colorado, and Vegas coming up over the next few weeks, providing even more headaches for Vigneault, his coaching staff, and players to try and pick up a consistent run of results. It may be tough, but the fact remains the same, the Flyers need to step it up and fast to avoid a quick drop to the bottom spot in the division.

“I don’t think there’s any major issues, just the schedule the last five, six games, has been pretty tough,” Farabee said. “We’re playing top games in the league, back to backs. It hasn’t been easy for sure. I thought the score tonight didn’t really tell the tale. I thought we had, like I said, a lot of chances, we could’ve buried. Just forget about it, focus on what we can do, what we can control from here on out and go from there.”