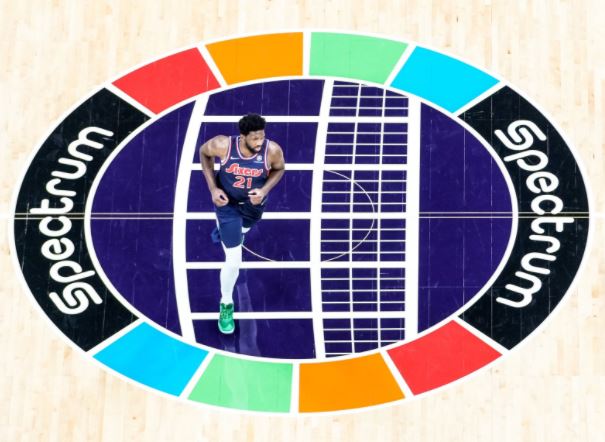 We’re back at it with an all new Morning Brew. The Sixers have some sick new uniforms that have the City of Philadelphia buzzing. The Eagles took on the Chargers on Sunday down in South Philly and lost a close one. Aaron Rodgers is making the headlines for all of the wrong reasons. The Atlanta Braves won the World Series. Tragedy struck at the Travis Scott concert. So Let’s get right to it, it’s Brew time.

celebrating storied history and honoring the place where we proclaimed destiny, The Spectrum.

I want all of it pic.twitter.com/TJvrlq8HJ3

The rest of the league’s City Edition uniforms

What do you think of your team’s threads? 👀#NBA75 | https://t.co/qYhirHQB2I pic.twitter.com/0dFMFkyRE6

Sixers get the W in their new uniforms

The Sixers are 6-2 despite Embiid not playing all that well yet and 3/5 of their starting lineup out or not with the team, which is a credit to this group as a whole https://t.co/yPDe9tdJp7

Look at this block!

The foul was overturned after review. pic.twitter.com/hLgc1Yzu1n

That face is priceless

We are all Tyrese Maxey after that Embiid block. pic.twitter.com/EPjTdFWmfO

ESPN Sources: The 76ers fined Ben Simmons his $360K game salary for missing Thursday’s game and plan to resume fining him until he cooperates with team physicians on his mental health issues and fulfills other basketball-related obligations. Story: https://t.co/U4RyCJwKp5

Chargers beat the Birds with a late field goal

The Chargers get the late field goal to win it in Philly!

Not a good look from a fan

As Nick Sirianni left the field, a fan threw a bouquet of flowers at him! Sirianni was understandably NOT happy #Eagles @6abc pic.twitter.com/9X40lA4eRJ

Zach Ertz is a great dude

Cardinals’ TE Zach Ertz named the Week 9 NFLPA Community MVP after launching a program to provide meals for Arizona food banks and breaking ground on his foundation’s House of Hope project to create a safe space for Philadelphia youth. pic.twitter.com/6jWxLujFiq

The Braves are the World Series Champs

Champions from all the angles! pic.twitter.com/ojc7kUGaFN

SOLER HAS LEFT THE BUILDING. pic.twitter.com/IOc5wXreRb

How stupid are these people?

There is currently a large crowd of what appears to be QAnon believers at the AT&T Discovery Plaza in downtown Dallas. A popular QAnon theory recently is that JFK Jr. of the Kennedy family will be making a big announcement at Dealey Plaza by the grassy knoll sometime tomorrow. pic.twitter.com/8L0Lw09wH7

This is what Donald Trump created

Ted Cruz and conservatives are mad at Big Bird…seriously

Krasner gets a second term

Tough break for this “MAGA” enthusiast

BREAKING: Jan. 6 defendant Jenna Ryan — who tweeted that she’s “definitely not going to jail” — has been sentenced to prison. https://t.co/qjhDSjUcFq

Save this in your back pocket to share at will. pic.twitter.com/M1SapQblmb

A white juror in the Kyle Rittenhouse murder trial has been dismissed after telling a sheriff’s deputy a joke about the police shooting of Jacob Blake https://t.co/IG4C7lM6mE

“A number of Armstrong students participated in sexually explicit chants directed at a female goaltender on the Mars team, leaving the unnamed goaltender in tears.”https://t.co/SiPSkv1Okp

Kanye West has no redeemable qualities

Kanye West admits he is still a Trump supporter https://t.co/qzJ7LkKKtx

Lmfaoooo Kanye made a group chat with Jay Z Kim K Drake & Pusha & said “I’m worth more than all ya in this chat” and drake replied “Kim can you get your lil husband again he’s having one of his moments” 😂😂😂😂😂😂 pic.twitter.com/8VT9riTN8c

Get your money, Beans

Kanye West says Beanie Sigel made up the name “Yeezy” and he’s been trying to give him money for it.

JUST IN: At least 8 people died in a crowd surge as Travis Scott was performing at a concert in Houston (via @AP) https://t.co/MSuw5tdAnB pic.twitter.com/heXJo6z3fP

Sources familiar insist Travis was unaware of the severity of things. https://t.co/E9pI2aMW36

It’s always about the Kardashians

Kylie Jenner is getting slammed for not taking down video she shot of boyfriend Travis Scott performing while fans were dying at his Astroworld Festival. One clip shows an emergency vehicle with sirens trying to make its way to the front of the crowd. https://t.co/kEByckwSQa

This is how you do it

Travis Scott should watch this clip of Chester Bennington of Linkin Park handling a crowd pic.twitter.com/JWcfhcdeTa

Jon Moxley has allowed me to share with you that he is entering an inpatient alcohol treatment program. Jon is a beloved member of the AEW family. We all stand with him and Renee, and all of his family and friends, as he shifts his focus to recovery.

This is an awful story

Henry Ruggs III was driving 156 mph just seconds before the crash that left a woman dead, according to prosecutors.

Prosecutors also said Ruggs’ blood-alcohol content was twice the legal limit and that a loaded firearm was recovered from his car. https://t.co/HLHX6b9819

Did Aaron Rodgers lie & mislead people into believing he was vaxxed? https://t.co/6uvM5UtRuk

“My desire to immunize myself was what was best for my body & that’s why this is so important to me. I made a decision that was in my best interest for my body.. I’m not telling somebody to get vaccinated or not get vaccinated” ~@AaronRodgers12#PatMcAfeeShowLIVE pic.twitter.com/AyUkhyvuzC

A job at Fox News is awaiting Rodgers for sure

Aaron Rodgers has mentioned the following in ONE interview:

– woke mob
– witch hunt
– cancel culture
– I’m not an anti-vaxx flat earther
– did my own research
– good friend Joe Rogan
– sterility and fertility
– If the vaccine is so great why are people still getting COVID?

Major addition to the story

Major add to the Rodgers story here from @RobDemovsky.

This summer, Rodgers petitioned the NFL to have an “alternative treatment” count as a vaccination. The NFL denied his request and has considered him unvaccinated since the start of the season.https://t.co/GybsVt7RJc pic.twitter.com/LXufOZlMLe

What the hell was he thinking?

Aaron Rodgers despises criticism so much that he actually lied about being vaccinated so that he wouldn’t be criticized for being unvaccinated. Think about that for a second.

OBJ is done in Cleveland

From @GMFB: The #Browns have made it official, releasing WR Odell Beckham Jr. pic.twitter.com/590408twzz

This is the hardest I’ve ever worked on a story, and I hope you’ll take some time to read it. Thank you to the team at @insider for their support, and of course, the brave sources who spoke to me over the last 8 months. https://t.co/nt4wmt6DFS

My Response To The Business Insider Hit Piece That Has Been 8 Months In The Making (Part 2/2) pic.twitter.com/lkKJi9i4sb

*Flashback to remind us of who Dave Portnoy is

More WWE releases with some popular names on the list

Did vaccination status play a factor?

Some WWE talent releases made due to vaccination status https://t.co/AJFC1cADuj pic.twitter.com/Rbr81jXRet

WWE is celebrating The Rock all month long

Such a great moment

When The Rock hit himself in the head with a chair 😂 @TheRock pic.twitter.com/0sTM7iMavt

A heartbreaker for the Lions this week

LSU pulls off the fake punt against No. 2 Alabama pic.twitter.com/AJ3CIXbbKw

Between the legs. 🔝 shelf.

What a goal by Matthew Tkachuk! 🔥 pic.twitter.com/XiRTme1LHY

This photo of Frankie Edgar from last night might honestly be one of the most brutal punchfaces I’ve ever seen. (📷: @louisgrasse) pic.twitter.com/bJ0PjieiHS