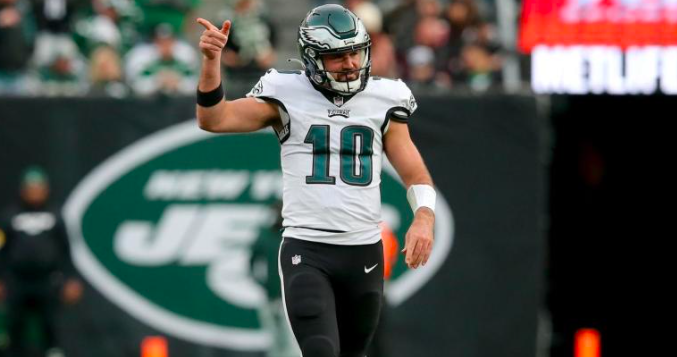 The Philadelphia Eagles desperately needed to walk out of Sunday’s road game with the New York Jets on top if they wanted to build any momentum for the rest of the 2021 NFL season. Even with a new signalcaller at MetLife Stadium, the Eagles rebounded from last weekend’s struggles and moved to 6-7 on the season.

Gardner Minshew won in his first start for Nick Sirianni’s squad on Sunday, leading the Eagles to a 33-18 road win over the Jets. Minshew, who was acquired by the Eagles in late August from the Jacksonville Jaguars, started off completing his first 11 passes and overall finished 20-of-25 for 242 yards with two touchdown passes.

The third-year player stepped in for the injured Jalen Hurts and did not disappoint, leading the Eagles to a needed victory heading into their bye week.

“It felt so good, man,” Minshew said. “It’s the best time I’ve had since Week 1 last year [when he was still with Jacksonville]. There’s nothing like that feeling. Glad to do it with this group of guys. They made it easy for me. It was a lot a lot of fun.

“Taking what they gave us, I think we did a good job of that as an offense in general,” said Minshew. “Taking completions, getting a lot of positive plays in the run game. The O-line gave us plenty of time, let me see the field and get it to our guys in space.”

Minshew registered over 5,000 total passing yards in his first two seasons with the Jaguars, tossing 37 touchdowns to only 11 interceptions. While things didn’t end well in Jacksonville following the drafting of Clemson star Trevor Lawrence, Minshew earned a chance with the Eagles and did exceptionally well making the correct decisions against the Jets.

Sure, Sunday’s opponents aren’t Super Bowl contenders by any means, but Minshew was able to take what the defense gave him and connect with tight end Dallas Goedert for a pair of scores. Not only did Minshew excel in his first start of the season, but the Eagles also stayed balanced on the offensive side of the ball, totaling 185 rushing yards and finishing with 418 yards in total.

“When we came into this game, we knew Jalen was banged up,” Sirianni said when asked about how much he changed the game plan with Minshew in at quarterback instead of Hurts. “We didn’t know Jalen wasn’t playing until today. We weren’t going to have a big quarterback run game today as far as our run game goes. So in the run game, not a lot. In the pass game, there’s going to be differences because it’s a different guy pulling the trigger.”

Most importantly, the Eagles did not turn the ball over once against the Jets, and did what they were expected to do…win on the road. It was a confident victory for the team, who looked miles better than their 13-7 loss to the New York Giants the week prior. Now the team will head into a bye week before closing out the regular season with three home games out of their final four overall.

Hurts should be back for a Week 15 showdown with the Washington Football Team, but should he not be, Minshew could start once again under center. The 25-year-old made the most of his opportunity on Sunday and now has the support of his coaches and teammates for when the team gets back to action.

“It’s been a learning experience all year for me learning the system and taking a step back and being in a new role for the first time for an extended period of time,” Minshew said. “It’s been a lot of learning, working on myself, kind of watching, and learning from a different perspective.”