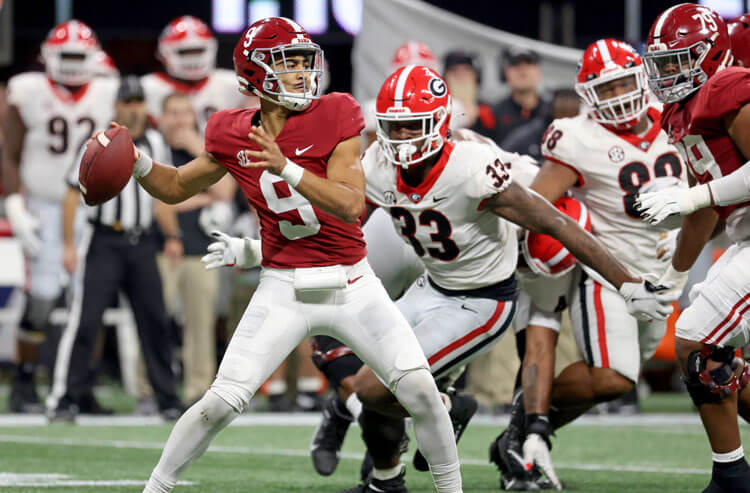 It’s TIME… for the first-ever Week 18 in the National Football League regular season. For some, this weekend will be the last time they see their teams playing a meaningful game until September, and, for others, it’ll be a primer for the playoffs next weekend. Whatever your team’s fate is this season, we are all together in losing something special: the last full slate of football games we have until the other side of the summer solstice.

With that in mind, cherish it, enjoy it, and let’s pick some winners while we’re at it!

This is a pick that will be hard to swallow, I know this up front. The Jags have been the perfect image of dysfunction this year – from Urban Meyer to Trevor Lawrence looking terrible, to their record being, once again, the worst in the league. To top that all off, they got smoked last week by the Patriots, 50-10.

For some reason, Jacksonville has been relatively successful against Indianapolis. In their last 10 match-ups, Jacksonville is 8-1-1 ATS against Indy. Earlier this season, the Colts won by only six points in Indianapolis. The Jags have a slightly above average rushing defense when you look at YPC, and obviously the strength of the Colts is a dominant run game behind Jonathan Taylor.

The Colts are going to win this game. They have to. Or else it becomes a disaster of epic proportions. Jacksonville getting 15 points here is too many for me to pass up. If you remove the Texans from their schedule, the Colts have only beaten one other team by 15 points all season.

It’s too many points. Take Jacksonville +15. Click here to see the latest odds.

This is a game many thought at the beginning of the season would have huge playoff implications, mostly for the Browns. Sadly, Baker Mayfield and the Browns are out, and the Bengals are in. But this game won’t feature any of the top faces for each squad, as Joes Burrow and Mixon join Mayfield (shoulder) on the sidelines.

Both offenses are decimated heading into this game, therefore, it is one of our lowest totals on the board sitting now at 38. This game has all the makings of an under for me, and if you’ve been with us all season, you know this has been a spot where we have excelled (low totals, taking unders.)

I’ll say it one more time for everyone who has missed it – it’s this low for a reason.

Take Under 38. Click here to see the latest odds.

Technically, both of these teams can still make the playoffs. If it didn’t already happen (as he is currently listed as questionable for Sunday) this past Monday night, this will likely be Ben Roethlisberger’s last game. The Steelers can still make the playoffs, but need the Jags to pull off the complete miracle upset of the Colts. Tomlin and Big Ben have been phenomenal in their respective tenures in Pittsburgh as underdogs, and I’m planning to go to the well one final time.

We still don’t know if we are getting Lamar Jackson back for Baltimore this weekend as of this writing, and if he suits up, he will likely not be Vintage Lamar as he still may be hurt, and hasn’t played in almost a month. I know Tyler Huntley has been a solid backup for them, but Ravens have lost five straight games now. So while he has played well in some of those contests, they simply aren’t getting the job done in the final box score.

Steelers getting six points against a team that hasn’t won in over a month is all the logic I need for this one.

Give me Pittsburgh +6. Click here to see the latest odds.

In this post, you have seen me several times pick the teams that “have nothing to play for.” And that is somewhat intentional, as we have seen throughout the last several years that those teams cover far more than the teams playing for something. This is not going to be one of those cases.

New England heads to Miami currently in the fifth seed as 6.5-point favorites against the Dolphins. Miami went on a run in the second half of the season, but was finally eliminated last week with a convincing loss to Tennessee. I am more of a believer in the idea that Miami is closer to their first half of the season than the second half. They still haven’t beaten a quality team this year (besides the Ravens in a Thursday night game) since they beat the Patriots all the way back in Week 1. The Titans exposed them last week, and I don’t think New England is going to take them lightly.

The Patriots need to win this game in order to lock in the No. 5 seed. While that might not seem overly important, if they lose, there is a very possible scenario that they end up playing the red-hot Kansas City Chiefs in the first round. You and I both know Bill Belichick will want to have this team rolling going into the playoffs.

Another situation where one team is fighting for their playoff life, and the other is just one game away from the off-season no matter what happens. That being said, I don’t think it means the Falcons are just packing up and going home. This potentially is Matt Ryan’s last game in Atlanta, and while it won’t get the fanfare of a Roethlisberger, Ryan has been a very solid, and MVP-caliber at times, quarterback for the Falcons for over a decade.

The Falcons are 4.5-point underdogs in their own building, and I just don’t think that’s right. The Taysom Hill New Orleans experiment has been a disaster. If I remove the one shocking 9-0 victory over Tampa Bay, the Saints haven’t beaten a quality team since Halloween, and only have wins against the Jets and Panthers since. I’m not saying that the Falcons are world-beaters, but they are superior to both of those teams by a solid gap.

It’s going to likely be a low-scoring ugly mess (also like the under as a side play), but I trust the team with the far superior quarterback to cover in this one.

Give me the Falcons +4.5. Click here to see the latest odds.

I know some people will be disappointed with the rematch, but I’m not. Say what you will, but these seem very clearly to be the best teams in college football this season. I’m very excited to see round two of this match-up, and the spread in the game is extremely interesting to me and feeding into my play.

Georgia is favored by 2.5 points at the moment I’m writing this. We all know the tale of the tape where the Dawgs were dominated by Alabama in the SEC title game, so why are they favored now? What’s really changed? The biggest change that I see is that ‘Bama will be without Jon Metchie III, who is an absolute beast of a receiver. He is arguably the best possession receiver in college football, and Jameson Williams as his receiving counterpart, who might be the best deep threat receiver the country as well. That dynamic absolutely destroyed Georgia in the SEC title game. With Williams going for 184 yards and two touchdowns, and Metchie having 97 yards with a score. But like I said, Metchie will be out on Monday.

We saw in the CFP semi-final against Cincinnati that the Crimson Tide moved Williams into the possession receiver role, replacing Metchie, rather than have someone else fill that slot. Assuming Alabama has prioritized the possession receiver over the deep threat as the more crucial part of their offense, that leaves a huge hole where ‘Bama had a big success in round one of this match-up.

Georgia’s defense is one of the best we’ve seen in the last decade, but ‘Bama’s weapons made them look like child’s play. I think losing Metchie is why Georgia is favored, and is going to play a huge role in this game.

I’m reading the spread, and calling it – Bulldogs win the National Championship.

Good luck to all and Go Birds, Dallas Sucks!