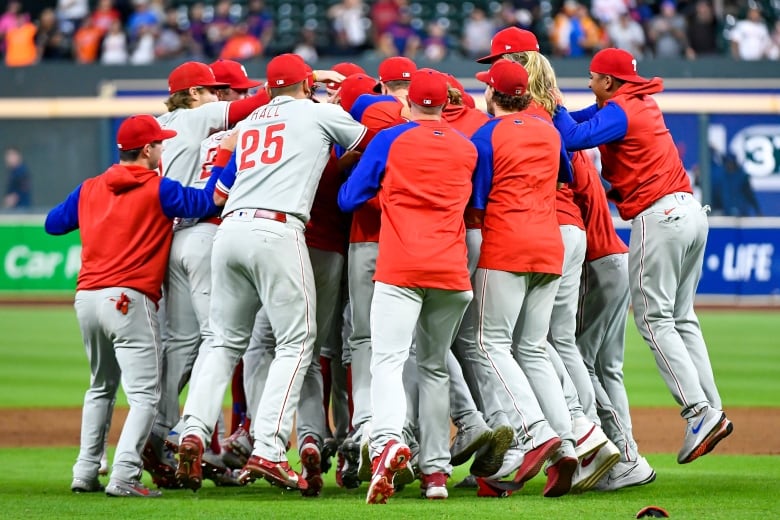 What a night to be a Phillies fan. The Phillies looked like they were going to clinch a 2022 playoff berth before their game in Houston even ended, but the Milwaukee Brewers staged a feel-good-for-a-minute comeback against the Arizona Diamondbacks to keep the Phils’ magic number at one – another win and they’re in.

It was a goosebump-inducing performance by the first-ever October version of Aaron Nola, who took a perfect game one out shy of the 8th inning Monday night – mere hours after this electric Scott Franzke intro before the game on 94 WIP:

Scott Franzke with an intro for the ages on the radio before tonight's game… pic.twitter.com/gny7pwYTlv

I didn’t hear the intro live, but I was tagged by numerous people about it, so I was luckily able to find it. I first listened to the intro around the 4th or 5th inning – I can’t remember in this post-playoff-clinching stupor this morning – but I’d be lying if I didn’t say I got goosebumps listening to Franzke invoke Roy Halladay’s 2011 appearance, the end of an era for Phillies baseball, and analogizing it to Aaron Nola. I’m not sure you’ll hear a better intro to a game like that for a long, long time.

With the Brewers’ comeback, the Phillies had to earn their way into the postseason with a win, and they did just that. Although Nola lost his perfect game after two hits in the 7th inning, José Alvarado and Zach Eflin continued to shut down the Astros’ offense to clinch the team’s first playoff berth since 2011.

Here’s how it sounded on NBC Sports Philadelphia:

SOAK IT IN, FAM. pic.twitter.com/VuOGSqiaCh

The Phillies are in the playoffs

As called by Scott Franzke pic.twitter.com/EbZtY6llRJ

In addition to that, Franzke’s call on Schwarber’s first-pitch bomb off Lance McCullers Jr. really set the stage for the entire night on the radio:

In the 1st possible playoff-clinching game the Phillies have had since 2011, Kyle Schwarber sends the first pitch of the game into the Houston night