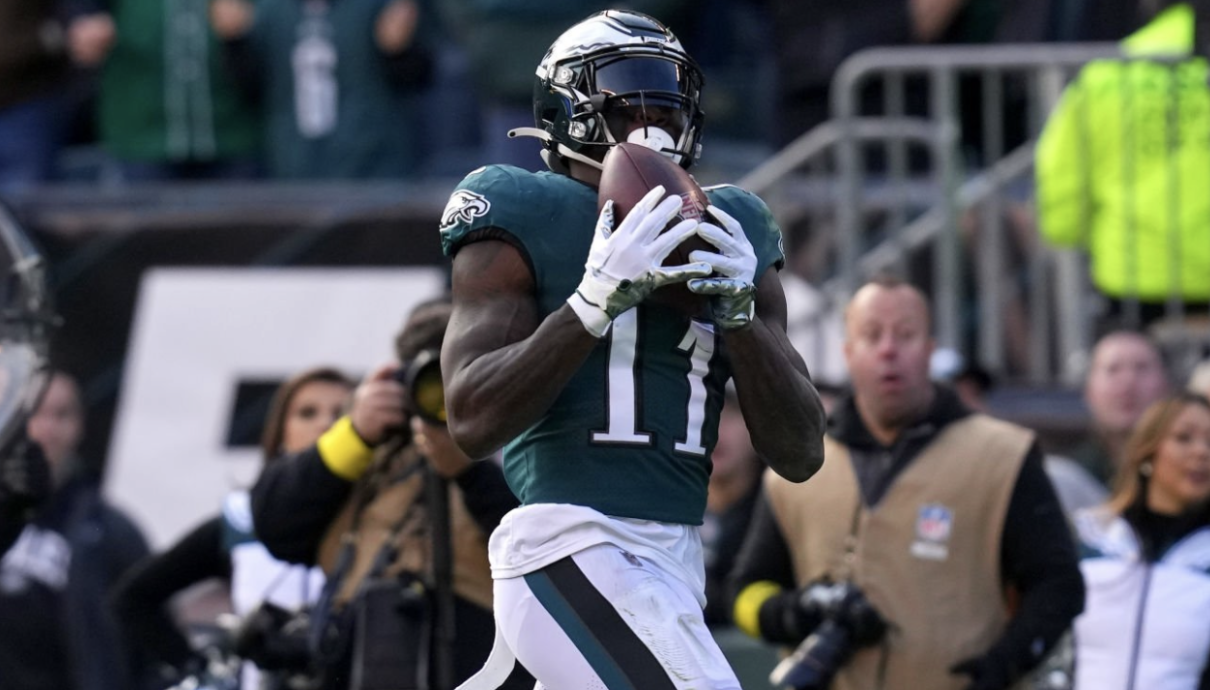 A.J. Brown was traded away by the Tennessee Titans last spring after failing to agree to a new long-term contract with the team,  and Sunday’s performance against his former franchise was the latest example of what he brings to the Philadelphia Eagles offensive unit.

Brown finished Sunday’s 35-10 over the Titans with 119 receiving yards and two touchdowns on eight receptions, delivering a memorable performance against his former team. Quarterback Jalen Hurts threw for 380 yards and three touchdowns on the afternoon for Nick Sirianni’s offense, with Brown and second-year wide receiver DeVonta Smith both totaling 100+ yards apiece.

Brown has since become a huge piece of the Eagles’ puzzle since his arrival from Tennessee and admitted postgame how important Sunday’s game meant to him internally.

“This one meant a lot to me,” Brown said. “Early on, I had mixed emotions about the trade and everything, and I’d be lying to you to say I didn’t circle this game.”

“I think the whole world knew what it meant to him based off of who he is, how he is, and how he responds to certain things,” Hurts said about Brown. “I’m happy that he put on a show. He’s a special player and a good friend.  He’s a real special player. I know that we make a big deal about it, but hopefully we can move on from it now. He did what he did, and onto the next.”

Brown enjoyed back-to-back 1,000 receiving yard years in his first two seasons with the Titans before totaling 869 yards in 2021. Since making the move to Philadelphia, Brown has brought a good mixture of physicality and speed to the Eagles wideout corps, currently totaling 831 yards and seven touchdowns on 53 receptions.

Not only has Brown been able to show off his versatility out wide, but his never-say-die attitude has also been on display so far this season, making important catches across the middle of the field. His partnership with Smith and his growing chemistry with Hurts has helped make the Eagles offense one of the best in the NFL.

Brown’s presence in the Eagles offense will be crucial down the final stretch of the regular season, but if he continues to put up performances like he did on Sunday then the team might be unstoppable come playoff time.

“Of course, he got himself up a little bit more for that,” Sirianni said about Brown’s preparation for the Titans game. “As much as we’re telling him don’t, don’t, just let it happen naturally, human nature is going to take over there. I felt like he went through his process throughout the week to get himself ready to play. That’s what’s important. You have to go through that part.

“Then you go through that part and then you get some more emotions in a game,” he added. “That happens. Look at me on the sideline sometimes. I’m pretty emotional on there, too. Again, he played a great game. It was good to see him go out and play the game against his former team.”

The Eagles return to action on Sunday against rivals New York Giants.