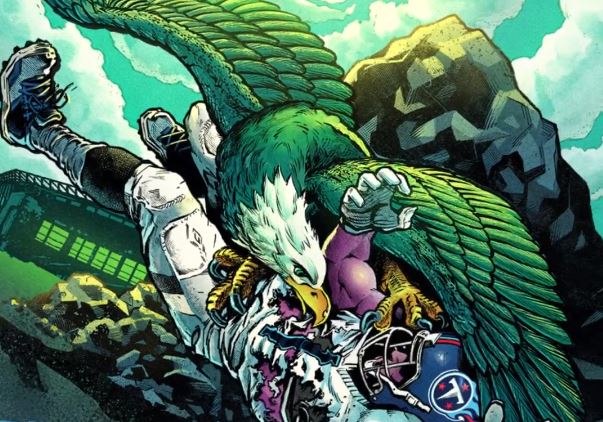 We’re back with an all new Brew. The Birds dominated the Titans on Sunday. The College Football Playoffs are set. Primetime is Colorado bound. Kanye continues to meltdown. We have a lot to get to as always, so lets do this! It’s Brew time!

Jalen Hurts and the Eagles destroyed the Titans

It was a big day for AJ Brown

AJ Brown in his first game against his former team:

Brown was a man on a mission

It’s the @Eagles world, every other NFL team just living in it. pic.twitter.com/7gbseDfbSU

Jimmy G’s season is over

Join us in wishing No. 10 a speedy recovery 🙏 pic.twitter.com/hgrZ5rPL9b

A tie for New York and Washington

Graham Gano misses a field goal as time expires and Commanders-Giants ends in a tie 😐 pic.twitter.com/kEe80qEU9g

Accountability starts at the top…

Rare words from a HC. You don’t hear that much in the moment. pic.twitter.com/49O5xXEd6H

The College Football Playoff is set

NO. 10 KANSAS STATE DEFEATS NO. 3 TCU TO WIN THE BIG 12 CHAMPIONSHIP 🏆 pic.twitter.com/2qMVDQFO7i

USC blew their opportunity to make the College Football Playoffs

See you in Pasadena 🌹 pic.twitter.com/r8d7ubojJq

The Beard’s return draws near…

“I’m told James Harden is targeting a return for next Monday in Houston” ~@ShamsCharania#PMSLive pic.twitter.com/VL31vzAzK8

That’s all she wrote for Team USA

JUST IN: Team USA’s run at the 2022 World Cup has ended after a 3-1 loss to the Netherlands.https://t.co/iY0XgiVSiW

Fred McGriff is headed to Cooperstown! He’s been elected to the @baseballhall by the Contemporary Baseball Era Players Committee. pic.twitter.com/I9cmJ8SlXL

Sasha Banks pulled up to the Heat-Celtics game 🔥 pic.twitter.com/zrEPc7fzgd

“The Holocaust is not what happened. Let’s look at the facts of that. Hitler has a lot of redeeming qualities,” Ye said. https://t.co/HQbaIWLuYM

Bill Burr on Kanye back in 2017…🎯! pic.twitter.com/hHnPBFkEUN

In other Kanye news…

It’s a bold strategy Cotton, let’s see if it pays off for him pic.twitter.com/XtP4N4jxRy

Rita Ora in a see-through dress

Rita Ora leaves little to the imagination in a see-through dress https://t.co/ZmZAKtxXEH

One of The Rock’s greatest promos ever

Goalie fight in the O !!!! pic.twitter.com/voU9hxcHUV