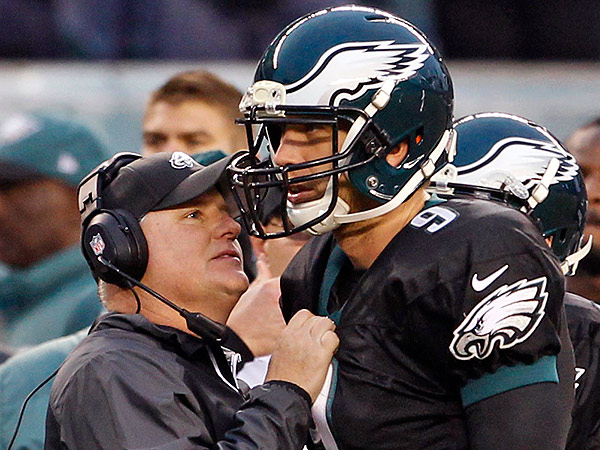 There was an interesting anecdote the Inquirer‘s Jeff McLane kind of glossed over this morning in his interview on 97.5 The Fanatic with Anthony Gargano and Jon Marks.

Talking about Sam Bradford and his ability to come across like a franchise quarterback, McLane slyly slipped in a, “Nick wasn’t really comfortable in that role. I think there wasn’t much written about that and we’ve learned more about that since Nick has been gone,” McLane said.

Gargano asked what criticism Foles felt, apparently forgetting everything that happened last season, and McLane continued, “I heard from a couple of players that he’d get down. I don’t know if it was, you know, a combination of things, but I understood that he would let it get to him. And it would affect him and he would get up and down a little bit. And I think that had something to do with the decision to part with him, uhm, among other things. I think the play in the field is number one. Number two, they just felt like Nick wasn’t the guy for this team and this city.”

Here’s some of the audio, courtesy of 97.5 The Fanatic.

That’s kind of a big deal in a way. Sure, Foles isn’t here anymore, but how are we supposed to know an NFL quarterback is hearing criticism and letting it get to him? It’s not like it happens a lot.

OK, I couldn’t keep a straight face while typing that. I’m sure we all understand that some athletes have an easier time avoiding or ignoring their own criticisms from people or media in the town they play in. It sounds like Foles was clearly not that type of person. And that’s OK. But to know that was part of the reason he might not be here anymore? Pretty big deal.