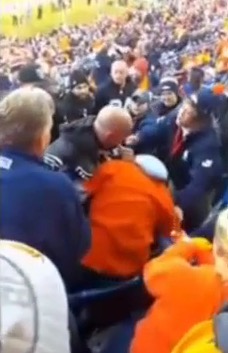 The Denver Broncos defensive players aren’t the only ones that can hit hard. Last week in Denver, when the Raiders played the Broncos, a fight broke out in the stands when an eager Raiders fan tried his luck with some Broncos fans. Needless to say, things didn’t turn out so well for the Raiders fan. Watch below as he gets slammed on his head.

Ouch! And they say Philadelphia fans are the worst? Ha!