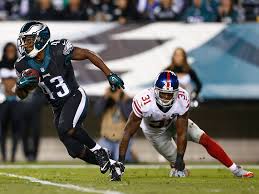 While there were plenty of players on the Eagles that stunk up the joint this season, Darren Sproles wasn’t one of them. He was one of their most solid contributors on the field. He had over 1,000 all-purpose yards on the year and led the NFL in punt return yardage with 446 yards. He also had two punt returns that he took to the house for touchdowns.

Now that the season has come to an end and the Eagles are in a search for a new head coach, there are many questions that need to be answered as far as the roster is concerned. Sproles has one year left on his contract for 2016 and is due $3.5 million.

It’s certainly possible that the Eagles ask him to take a pay cut and I fully expect that to happen. I don’t think he’ll be back next season, but that’s just my opinion. He did recently state that he would love to see Sean Payton become the next head coach of the Eagles. If that were to happen, you’d have to think that he’d be part of this roster next season.

He recently spoke to CBSPhilly.com and touched on this past season and the future.

I still want to be playing and it bothers me we’re not in the playoffs. I’ll go back and train and spend time with my family. Things will depend on the new coach. I still fight the same battle. I’m small so there is this fear that I’m going to get hurt (if carrying the ball too much). I am satisfied with my touches. But I understand that it’s always going to be the battle. It is what it is. I feel good. We’ll see where the future lies.”

I’d love to see him back in Eagles green next season, but clearly tough decisions will need to be made about this roster. If Sproles were to return, it would be his third season with the team.