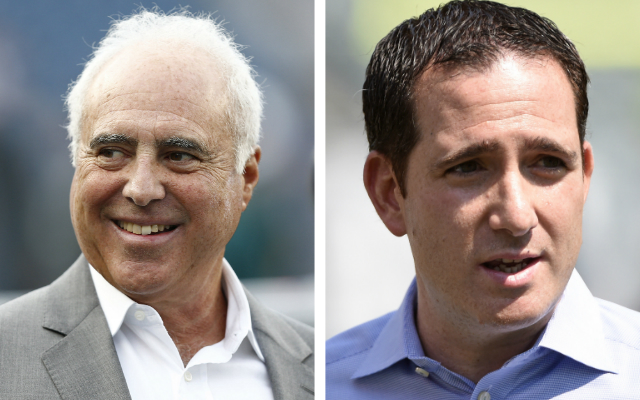 We mentioned earlier that Duce Staley has already interviewed with the Eagles, therefore satisfying the Rooney Rule in the process. Not many people, if any, think that Staley will actually be seriously considered as the next head coach for the team, except maybe his friend, Jamaal Jackson.

And, if Chip Kelly was being honest when he said Staley was in charge of the running backs rotation among DeMarco Murray, Ryan Mathews and Darren Sproles, then I certainly wish he doesn’t become the next head coach of the team. If that fiasco was a result of his coaching, then I’m not sure I’d want him coaching the entire team.

We all know the big name candidates that have surfaced so far for not only the Eagles, but other teams looking for head coaches, too. Names like Jon Gruden and Bill Cowher have been linked to the Eagles, so if there was any chance the Eagles could get them over Duce Staley, they’d probably take it. But, according to a report from Mike Florio at Pro Football Talk, the Eagles may have their target locked.

Per a league source not connected in any way to Gase, three teams are expected to pursue Gase aggressively: The Eagles, Browns, and Dolphins.

Only two of those teams currently have vacancies. Cleveland is expected to make a coaching change, too.

And in a quarterback-driven league, that’s one of the most important skills any head coach can have.

Gase joined the Bears last offseason, and was a top candidate to become head coach with the 49ers, also. According to Florio’s report, Gase was never seriously considered to supplant John Fox in Denver after being offensive coordinator for two seasons with Peyton Manning and the Broncos.

Now, there’s no current rumors around the league as to where Gase is wanting to land, but his time in Chicago sure seems like a one-and-done type of deal. With at least three teams heavily pursuing him, he could likely become the first coaching hire of the offseason.

Judging by these quotes from this NJ.com story, it might be the best hire that Jeffrey Lurie can do this offseason.

The next great coach in the league,” one agent (not his) told me. “He did great with (Tim) Tebow and (Peyton) Manning in Denver and fixed Cutler (in Chicago). He’s very smart.”

“A lot of people credited (Mike) McCoy for what he did with Tebow,” an executive said. “But it was Gase. The guy is just great with quarterbacks. Now, look how much he helped Cutler. If he puts a good defensive staff together, he’ll be a real good head coach.”

Another executive, who is rare with praise, summed up Gase in one sentence.

I think I’ve been sold on Gase.