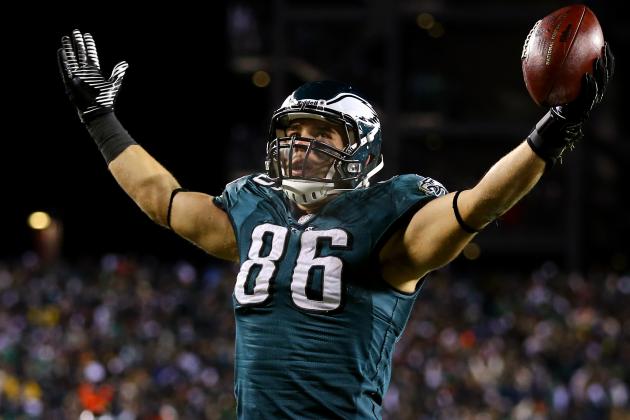 When the Eagles re-signed Zach Ertz to a five-year extension for $42.5 million and $20 million guaranteed, it pretty much cemented his status as the top tight end in the foreseeable future for the Eagles. Brent Celek certainly can’t touch him, but the Eagles also wound up giving him an extension to the tune of a much lesser three-year deal worth $13 million and $6 million guaranteed. So now that the Eagles have a dual tight end threat cemented for at least the next three seasons, Ertz has some goals he’d like to accomplish, and one of them is to play a second season with the same quarterback for the first time in the NFL.

I’ve played with five quarterbacks now in three years,” Ertz said, referring to Bradford, Sanchez, Nick Foles, Michael Vick and Matt Barkley. “That seems like a lot. I want to play with Sam. Ultimately, that’s not my decision.

“I think he’s excited. He wants to be back in Philadelphia. Whether he’s back here or not, that’s none of my business, honestly. He’ll do what’s best for him and the Eagles are going to do what’s best for us. But at the end of the day, I think he does want to be here.”

It sounds like Doug Pederson agrees, since he said Bradford fits perfectly in the new Eagles’ offensive scheme, and we posted Frank Reich giving us a preview of what to expect with the team’s new offensive scheme. If Bradford leaves Philly for greener pastures, or simply for a better opportunity, then nobody can really blame him. But having a guy like Ertz, who is the best offensive player on the team, call for him to stay in Philly is a big deal. Sure, Bradford is likely one hit to the legs away from being a retiree, but if he’s the best option for the Eagles right now, they probably should do their best to keep him and make their star tight end happy.

Ertz also talked about some other goals during his press conference yesterday, and it had to make Eagles fans happy to hear some of those goals, especially when he’s already talking about what kind of legacy he wants to leave here. Here are some quotes from the press conference, courtesy of CSN Philly.

“When people think of great tight ends in Philly, I want to be the guy that they think of. I look at Dawkins, I look at Donovan, I look at Westbrook, and these guys have left lasting legacies in this city. Those are the guys that I want to be mentioned with. I’ve never played the game for money. I pride myself on being the best tight end that I can possibly be, and I think this deal signifies that.

I am really happy with the deal. My agent did an unbelievable job. But at the same time, I just wanted to be in Philadelphia, and whatever price that took, that’s what I wanted to do. And I want to be here for a long time.

“I don’t play the game for financial success. Ultimately, I’m going to play the game to be the best player that I can be. The money — I never looked at it as something that I needed to get done this offseason. I’m very frugal off the field and I don’t really spend, so the money has never been something that I’ve paid attention to. I don’t really care about the money, honestly. All I care about is winning football games, and this commitment that the Eagles have placed in me is something that I take a lot of pride in.”

I’m never going to be satisfied with where I am as a player, whether it’s the receiving or blocking aspect of it,” Ertz said at a press conference Monday afternoon at the NovaCare Complex.

“I’m going to continue to push myself to improve each and every one of those aspects. I’m really excited to work with coach (Doug) Pederson, a new mind and new voice, and I think that, hopefully, that’s going to take me a long way. But at the same time, I think I have to be more consistent as well. Some of that falls on me and I’m going to work every day to get it done.”

“My goal definitely isn’t to be [a] top five [tight end in the league], it’s to be the best in the league. That’s something that I’m going to take pride in [trying] to accomplish. I don’t play this game to be an average tight end. I play this game to be the best tight end I can possibly be and win as many football games as I possibly can. And I’m going to push myself to accomplish those goals over the next five years. I don’t think I’m ever going to be satisfied. Jason Witten isn’t satisfied and he’s going to go down as one of the best tight ends to ever play the game. I’m always going to work through the next 10 years, hopefully, of my career and I’m really excited for it.”

On a serious note, it sounds like Ertz would make one hell of a coach someday. It’s a good thing the Eagles re-signed him when they did. Now let’s just hope he doesn’t demand a new contract after next season and hold out of training camp.